The news that Chicago chef Jake Bickelhaupt and his wife Alexa Welsh would open a fine dining restaurant in Uptown right under the “L” tracks as the nearby Wilson station was undergoing renovations, was welcomed by neighbors and bloggers alike as further evidence that change was unavoidable for their troubled neighborhood. The hyperlocal news site Uptown Update even announced the opening as a “welcome addition to Uptown.” After being awarded two Michelin stars three years in a row and receiving accolades from the city’s chief restaurant critics and from national and international publications, 42 Grams abruptly closed its doors in June 2017, six months after the couple divorced. The announcement was confirmed separately by Jake and Alexa in social media. Alexa went so far as to clarify in the restaurant’s Facebook page that the closing was not due to “financial reasons.” 42 Grams, Jack C. Newell’s fly-on-the-wall documentary about the restaurant’s opening and the toll it took on the couple, offers enough tantalizing clues to the multiple factors that may have led to its closing. It is also an object lesson on the blood, sweat, tears and joy of opening and running a business, especially in a field as competitive as the food industry.

Jake, an alum of the Charlie Trotter school of haute cuisine, and Alexa started hosting 15-course underground BYO dinners on their Uptown apartment under the Sous Rising name while Alexa was working full time for an advertising agency. At one point in the film, Alexa describes herself as a “Type A workaholic.” And yet, as a hostess, she is charming presence, a perfect counterpart to Jake’s hard driving temperament. Jake, on the other hand, is the type of individual who writes his goals down in a notebook and meets them: by the age of 30, he wrote, he would work at Schwa, Chef Michael Carlson’s critically-acclaimed restaurant, and by 33, he would open his own restaurant. Jake is cocky and self-assured; he claims to have a hard time articulating his feelings and yet has no qualms about tearing city chefs a new one in questioning their commitment to the kitchen and to the culinary arts. Jake and Alexa take the logical next step in their culinary adventure and buy a shuttered fried chicken restaurant located on the ground level of the same building they live in, transforming it into a full-fledge fine dining restaurant. They name it 42 Grams after the supposed weight of the human soul (21 grams) and after Jake’s and Alexa’s own commitment to the project. 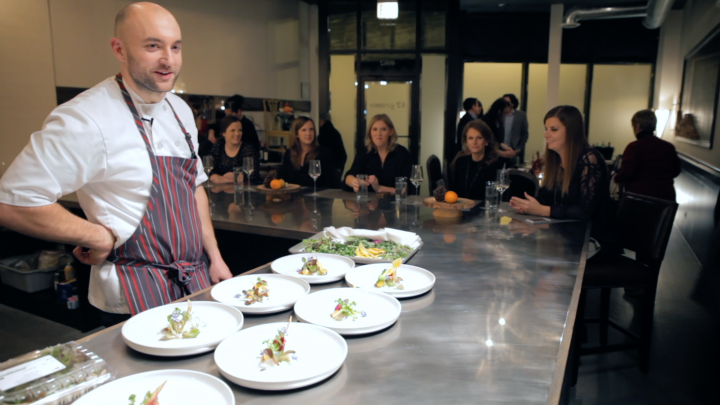 Newell’s camera is a constant, at times intrusive, oftentimes inquisitive, presence. He pays attention to the tiniest details and yet he knows when to stand back and let events transpire in front of the camera. Newell and his crew embed themselves in the story the way a war correspondent does and in so doing documents all the battles Jake and Alexa must wage in order to attain Jake’s ultimate goal: to immediately get two Michelin stars. In Jake and Alexa, Newell found two willing, unafraid participants. They share, some might even say overshare, their feelings, their opinions, their misgivings. Newell captures them at their best and their worst.

Newell also pays attention to the process, to the nitty gritty of what it takes to open a business in Chicago. And so, with construction going on around him, Jake and his small team research and develop every single dish that may or may not end up in front of a guest. A whole sequence involving the baking of canele, a small French pastry, for a particular dessert stands out as an example of Jake’s meticulousness but also his impatience. Character traits that, added to high levels of stress on the days leading to the opening and the days after, explode to the surface as he berates sous chefs and staff alike. Employees come and go and, yet, Jake manages to create dishes and an experience that wows dozens of foodies. It isn’t until much later, after the credits roll, that you realize the effect such a small space –the dining area also doubles as kitchen and prep area– has on these interpersonal dynamics and how oblivious the clientele is at these outbursts and goings-on while they enjoy these finely crafted dishes and their own conversations.

The price they paid for their success is high. Alexa loses both her parents (at one point in the film, she shares the news that her mother has been diagnosed with terminal cancer and that she is moving in with them for hospice care) and Jake his father during the restaurant’s brief existence. Newell also hints at Jake’s problems with alcohol (Jake even alludes to having had one beer too many when a local restaurant critic visited the restaurant). Newell shows remarkable restraint when it comes to these personal matters; another filmmaker would have devoted a whole sequence to the care Alexa is giving her mother. But the hyperfocus on the couple allows us to hear the weariness in their voices, to experience the joy when they finally receive that much expected phone call from Michelin, and the sadness as they question if all this was worth putting their lives on hold. 42 Grams may in essence be a film about the pitfalls of pursuing the so-called American Dream, about the price of perfection. But it is also a study about human nature in all its marvelous and maddening complexity.

42 Grams will be shown as part of the Gene Siskel Film Center’s Stranger than Fiction series on Saturday, January 27 and Wednesday, January 31 at 8 pm; Sunday, January 28 at 5 pm; and Thursday, February 1 at 6 pm. The film is also available in the following digital platforms: Netflix, iTunes, Amazon Video, Google Play, Vudu and Vimeo.