“Lies, they’re all lies! / Your feathers are falling while you fly / Why can’t I feel anything when you say goodbye?” – spider/WAVES

Le Butcherettes just ended a tour through Europe, plus a set of concert dates with Hot Snakes in the US, and now before they begin their tour with The Flaming Lips in August, the band will join Wayne Coyne and friends in Chicago this Saturday, July 14, for a performance at the Taste of Chicago. The roqueros also surprised fans with their announcement that they return to Mexico in December for the Catrina Festival in Puebla. Details for Saturday’s concert can be found at CityofChicago.org 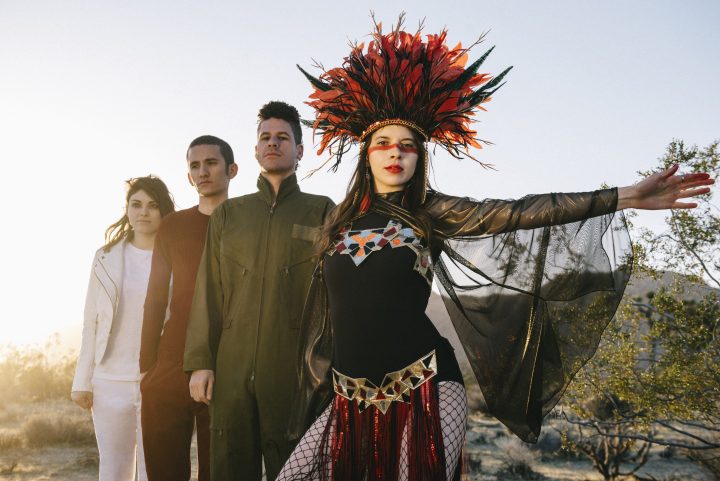 In the song and video for spider/WAVES, Guadalajara native Teri Gender Bender (Teresa Suárez Cosío), the band’s iconic fierce frontwoman and founder, aggressively expounds on deep-rooted emotions, disassociation with others and the complexity of internal demons and gods. Dressed to battle, the vestment is a tribute to her Mexican grandmother, and it’s also an exploration of familial and cultural information that she was previously unaware of, and their influence in her life.

Suárez has always been an on-stage explosion of liberating fury and these new singles are further proof of her boundless passion.

The single struggle/STRUGGLE is cleverly presented in three versions – bi, MEN and TAL – about which Suárez explains, “The struggle is never ending. As a latina woman, the constant battle within a steaming pool of perverted wagging tongues becomes a part of life which on a sadly angled upside only makes for thicker skin… yet none of those struggles can compare to the internal fight of self-versus m/other, m/other versus your world.” 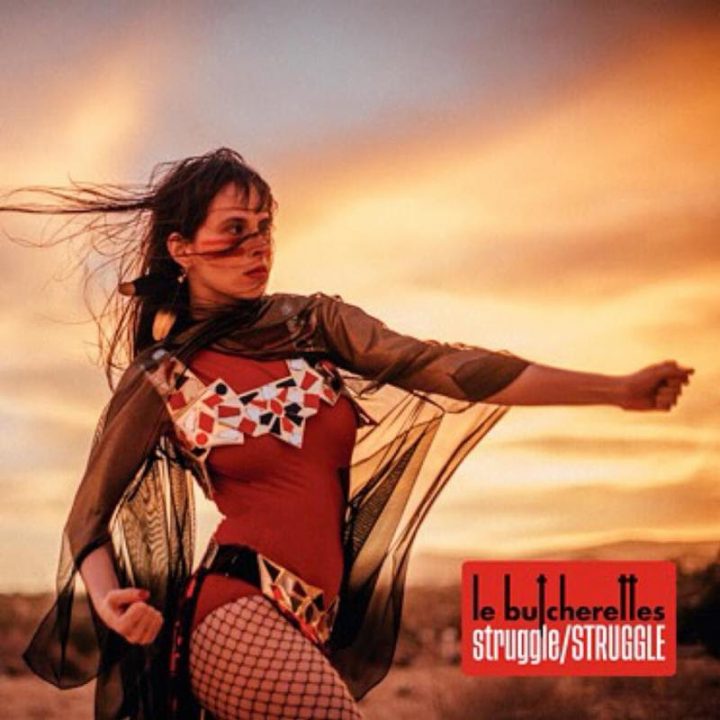 Speaking with Suárez via telephone, she told me she just recently found out about some of her Mexican and Chichimecca roots and their ties to music, she talks about loving the song Se Cree Joven and the struggle(s) that led to a catharsis, of sorts, through these new songs.

In the video for spider/WAVES you’re in a warrior outfit and you’ve mentioned it’s in honor of your grandmother, tell me about that…
“It’s really interesting because I found this out recently that when my mother was younger, her and her brothers, you know, my relatives, my great aunt, my uncles… they would have a ceremony once a month and they would dress up in traditional Chichimeccan costumes. Thank God for everything that they found each other and that their spirits found each other in the family circle. My grandmother was the percussionist, with the leather skin over the drum, and she’d keep the beat.

So I  thought that’s insane, I recently just found this out, so music has been, in a way, a part of my bloodline… and that makes me proud. ‘Cause there’s lots of things that may be in the dialogue, there are things that we’re ashamed of, of our culture, where people say, ‘Oh, well I’m ashamed to be this or that’ but what about make it better? I think it’s also good to have a dialogue where we’re proud of our cultures and celebrate the differences of what makes our culture special. And I mean that in a positive way. *

In the same video I noticed, and I don’t know if this was intentional or not, there’s this calmness when you see the shadows of the musicians playing and then the euphoria with you dancing and stuff… was that intentional?
Oh, that’s awesome that you noticed. That was definitely talked about, the further liner notes with the director, that basically we wanted to transmit a feeling of disconnection with other people and sometimes they represent these shadowy strangers. And even though they’re supposed to be your family and everything, or even as a stranger, there’s that empty lonely feeling.

A lot of your songs are obviously anthems of empowerment for many of us, what is one song that you can tell us is that for you?
Oh, my Lord, okay… for me, damn, I think it’s… recently it’s Se Cree Joven – and I’m not bias, so nothing to do with me I swear. (Laughs). Se Cree Joven de Alice Bag. And it’s an anthem that I’ve been having stuck in my head, and, I mean I just turned 29 recently, so, you know, it’s like… the age does not define you, alright? (To people that are ageist.) Or, it does define you to some sort, but not… you know, it shouldn’t restrict you. So that’s what I love about Alice Bag’s song.*

Upon first hearing Le Butcherettes new singles, one can’t help but wonder what the spark was that fueled the intensity of the songs not only in the sound but in its lyricism. Both waves/SPIDER and struggle/STRUGGLE provide a tiny glimpse into a desolate and deep darkness and the consequent lucha to reach clarity, an awakening. Yet, despite the chaos, there’s always hope.

Le Butcherettes is symbolic of grief evolving to art, of pain becoming empowerment.

The Flaming Lips, Le Butcherettes, Half Gringa at Taste of Chicago

This entire conversation initially started by asking Suárez what state of mind she was in when she created these new songs. Her response was completely unexpected and shocking. The consequences of what she revealed in her response, left her “feeling like I was going crazy and I didn’t know who I was.” In the Soundcloud audio piece I’ve edited above, which contains only a portion of the interview, the conversation takes off on what she did following the turmoil.

Please note: Because of the delicate subject matter, and its importance on many levels, I’ve decided to combine that portion of the interview with a more extended article that not only reveals more of Suárez’s personal life, but will also include additional resources for those that find themselves in similar situations, whatever their degrees of intensity. It’s a topic that won’t be avoided, it will just be presented on its own.

*Edited for space, please listen to the Soundcloud link for full audio.