Chicago is home to one of the most incredible theatre scenes in the United States. With the 2nd Chicago International Latino Theater Festival less than a few days away Gozamos wants to get the word out and make sure no one misses an opportunity to experience Latino stories by Latino artists. 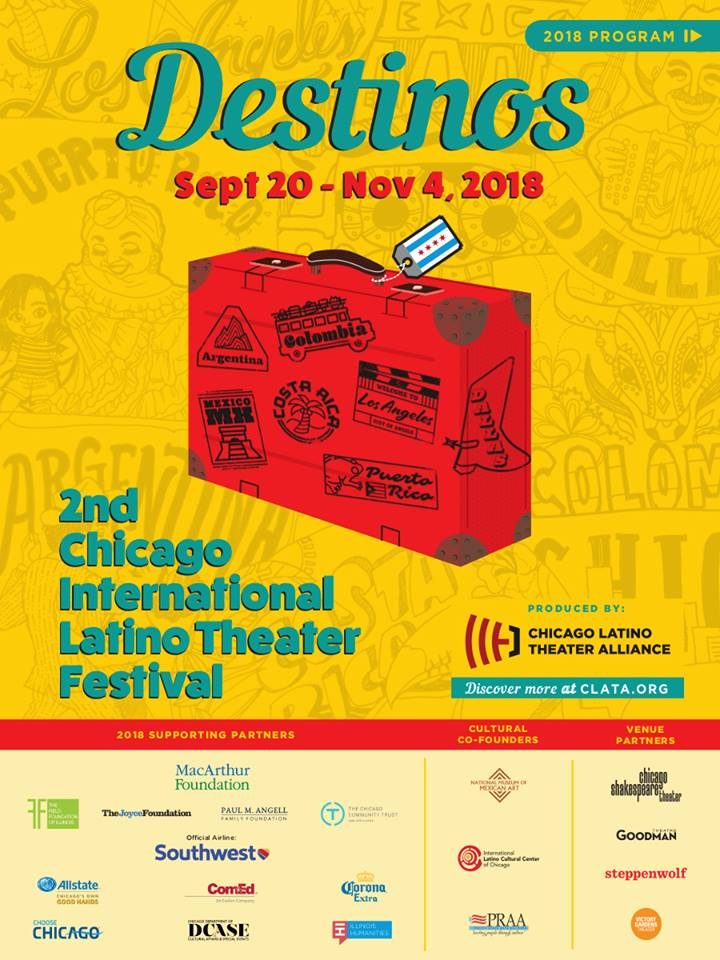 I was lucky enough to be able to get a meeting with CLATA’s very own Executive director, Myrna Salazar for a quick Q & A about the upcoming Destinos Festival.

We got around the table to discuss issues pertaining to theater very specifically how to provide create an alliance that will provide better opportunities to Latino theaters and support them in all aspects; audience development, to create and amplify the work of new emerging Latino playwrights, And make sure the conversations around our stories are told from the Latino experience, not by someone else.

The Alliance is a fairly new initiative, created a very robust  and a very ambitious project by doing the first International Latino Theater Festival in 2017

Could you tell me a little more about this years festival?
I don’t know how much you know about Destinos, the name of the festival, but it is the marquee event of CLATA. We brought in nine companies, a total of 61 performances. This includes Puerto Rico, Columbia, Mexico, Los Angeles, New York and five of the top Latino theater groups in Chicago.

We are bringing five international companies; two from Mexico, one from Columbia, one from Argentina, and one from Costa Rica.

That sounds incredible! I hope I can catch them all.
Well let me tell you this year, se nos fue la mano. It’s an amazing line up. I know it’s going to touch the very fiber, the soul of our audiences. The festival starts this Thursday, September 20 with three local theatre companies:

…by Hector Caballero at the Steppenwolf Theatre. It is a fictional crossroad between two artists, Frida Kahlo (1907-1954) and Sylvia Plath (1932-1963), in which they share the most intimate and passionate moments of their lives.

The Miracle Center’s There’s a Coquí in My Shoe!

Urban Theatre Company’s Not For Sale…

… by Guadalis del Carmen at the Urban Theater Location, which is based on the Puerto Rican festival and the ownership of our community, during the whole process of gentrification.

Can you give us a bit more of an idea of some of the productions in this festival that runs through November?
There’s La Prietty Guoman which is a one man show cabaret style about a transgender who sings all his songs live, along with a monologue about his journey – being transgender, being Mexican, being indignant, being proud. It’s a powerful production that also deals with the homophobic attitude of the Latin american country.

Another production coming is Mendoza by Los Colochos Teatro from Mexico It’s a story based on William Shakespeare’s Macbeth  but set in the throws of the Mexican revolution, where one of the actors is a live chicken on stage. One of the most powerful  production by Los Colochos.

El Patio from Costa Rica list of what it is to be a man, and what it to be a different. it’s exploring the impossibility of  fulfilling the society’s idea of what it means to be a man.

Another one I’ll talk about is Circolumbia’s Acelere will be out under a tent on the yard at the Chicago Shakespeare. It’s a collaboration – a high spectacle of energy! It’s jaw-dropping circus acrobats, with music, and dance.

We’ve got the Latino Policy Forum supporting and collaborating on WET: A DACAmented Journey. This is about a young man who’s always been in America without papers and exploring the desperation and limitations DREAMers feel through a broken system.

In a nutshell, those are some of the productions that are going to be part of our Second International Latino Theater Festival.

Wow, that sounds amazing. I’m so excited for this festival, I hope I can see all of them.
You’re gonna be touched by each and every one of them. Chicago is the mecca of theater with over 240 theaters in the Chicagoland area and only very few can say they are Latino. Not only did we want to have our Latino theater artists on stage during these productions, we also want to have Latino artists that can design the stage, the lighting, the wardrobe. So, there is a huge aspect in this city for job opportunities in this career path. And, that’s one of the ways we would like to also power the narrative, by pushing to bring to the forefront Latino theater.

It’s a responsibility and a commitment to come together and be part of getting their work produced. And, more than anything, is that their work be seen by a wider audience.

You can find the full line up for Destinos 2018 at www.clata.org/destinos-main 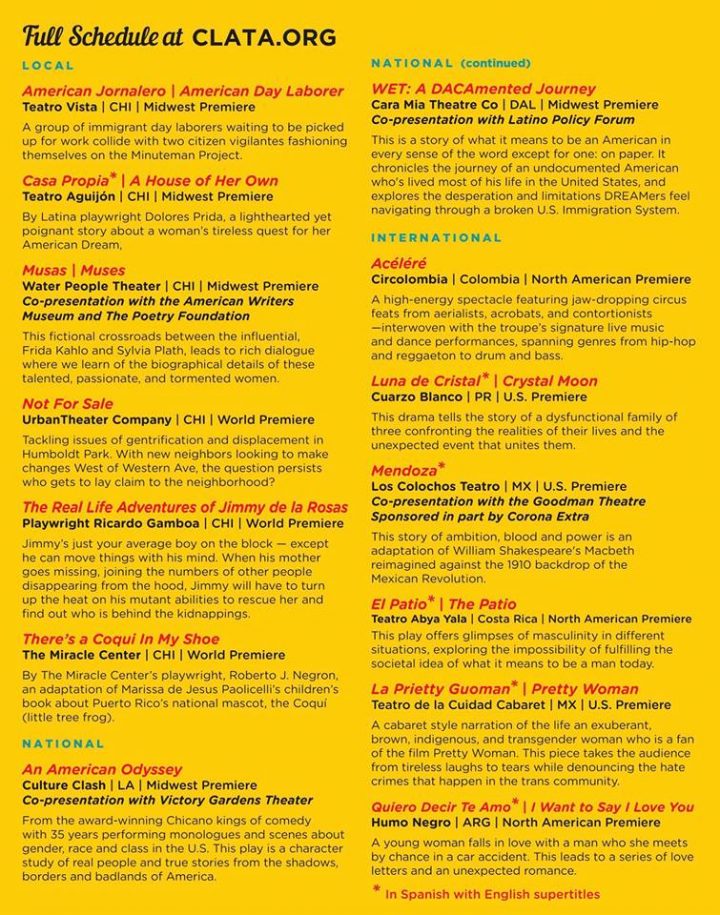 After my interview with Myrna Salazar of CLATA I was eager to reach out to The Miracle Center that has There’s a Coquí in My Shoe! by Roberto J. Negron opening this Friday, September 21.

The Miracle Center is a theater organization that works with youth, families, and young adults to get them involved in theater, and they’ve been doing it for 23 years now. They’ve recently relaunched their adult theater ensemble, who are set to take audiences on a trip to Puerto Rico starting this Friday.

I had the pleasure of speaking with Vanessa from the Miracle Center.

The Miracle Center focuses on providing help through the arts using theater not only as a kind of therapy but also as an after school program. This was the first (and certainly not the last) time Vanessa would bring up the idea of family. She talked about how through theater they were creating a family. They would laugh, cry, and fight with each other but overall they are a family. She also mentioned that for the adult ensemble, it serves as an outlet and it’s a good opportunity for them to get back out on the stage.

It’s not just an outlet for the adults though, it can also serve as a safe haven to youth, a place where they have access in art and can get away from any trials life may have for them, and let them be with their new found family.

Tying it back to Destinos, Vanessa said she was not only excited for their show but for all of the festival. She talked about how Coqui was a process— it took three years to finally get this story in front of people. From the sound of it, the audience will be transported to the island and the story is a real love letter to the beautiful island of Puerto Rico.