Howard Street Gallery, located at 747 N. Howard St. in Evanston, brings to you street art in a refined form. It is a gallery and paint shop attempting to bring a positive message to the community.

Howard Street Gallery is the combined effort of owners Tony P. and Yusuf. It was a business partnership that came from a like-minded vision to bring street art into the Chicago area art scene. Tony, a north side resident who has established creative ways to pursue his own artistic endeavors, had entertained the idea of opening such a gallery over a year ago. During a casual conversation with now partner Yusuf, who was looking within the city to establish his version of the gallery, mention of the Evanston location was something that interested him. Plus, being outside of the city allowed the opportunity to actually sell spray paint. Upon viewing the storefront, the two decided to join forces to bring their similar visions to life.

The gallery’s opening exhibition is a mix of featured works from the likes of local artists such as Cove DC5, Uriel Correa, Shel, Anais Machin, Matthew Hoffman, Keith Pollock and Paul and Tom Pushautz. Also featured is a semi-permanent installation created by Thor, a street artist from Michigan, which is a mixture of free hand painting and collage work spanning two walls. He presented the work in such a way that others would be able to add to it, almost as if it were an anonymous collaboration. The subject is a cityscape based on Howard Street. The entire installment was done with whatever materials could be borrowed from others and/or found in alleys around the neighborhood. 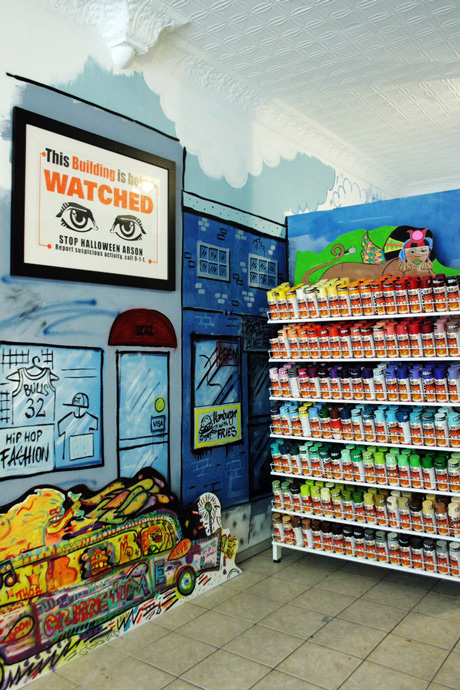 “I’ve done a bunch of stuff like this,” says Thor. “This kind of street scene and getting a bunch of collaborators to do characters or do signage or fill in background scenes.”

It includes high-rises and storefronts that depict sales on clothing and other goods found on window signs. At the very top of his work Thor painted a ladder reaching a high-rise building sitting atop a cloud, something that can escape your immediate view if you weren’t searching for details. There are several smaller pieces used as well ranging from small trinkets to cardboard cutouts. They are set up in a way that looks almost like memorabilia on someone’s shelves at home. They also double as displays for some products.

“I’m honored that they asked me to do something for them,” says Thor.

“Thor’s an awesome guy,” says Tony P. “I’ve had the opportunity to work with him on full on murals… I invited him to do a show and he decided to do a semi-permanent installation.”

Upcoming shows will feature solo exhibitions from Thor and Chaz, a legendary L.A. artist. The gallery will have a rotating exhibition every 2-3 weeks, with merchandise found in store. Screen prints are available, Grime Time apparel with promise of baby onesies in the coming future, and brand name spray paint varying in color selections can be found inside.

“Selling spray paint was not the original intention,” says Yusuf. It was something of an afterthought, since they are located outside Chicago. The city’s restrictions on spray paint do not apply and it can be sold. Currently the gallery’s selection of brand spray paint includes Belton and Krylon.

“We’re trying to make it mostly for murals and canvases,” adds Yusuf.

As a way to regulate the graffiti in the area, both owners are promoting the painting of permission walls and also they will be looking for sites so that artists can go and display their talents in a well-designated area.

“We just came here to bring a positive message to the area,” says Tony P. “There’s a lot worse things going on around here than graffiti.” 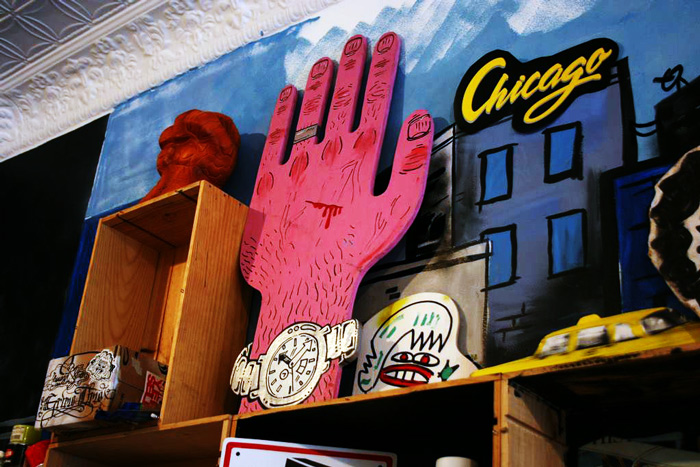