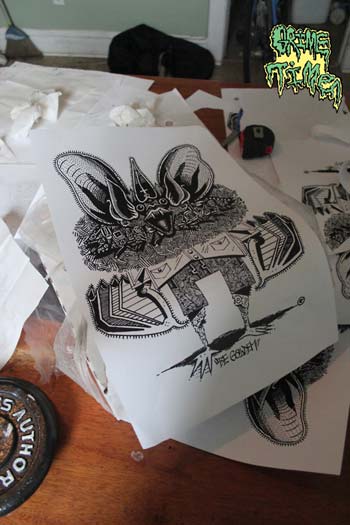 In a city with so much going on under the radar, Grime Time Magazine has stepped up to showcase the Chicago graffiti scene using photo collages, history, interesting tidbits, legal advice and now selling apparel.

Starting in late 2009, Grime Time Magazine is the creation of local photographer Ghetto P, who created each issue himself. Starting as a collection of photographs, Ghetto P has recreated the Chicago graffiti culture within the four issues and one spinoff (released thus far).

“I had all these pieces in front of me I wanted to put together. I know a lot of talented individuals and I want to put them out there to shine,” says Ghetto P. “I’ve had homies pass away and I feel like I’ve been here for a purpose, to actually catalog and tell people Chicago has some ill motherfuckers in town!”

Not only through photographs can the reader witness this culture, but also through in depth interviews enriching those with history, as well as experiences from the city’s most prolific writers.

Unlike other graffiti publications, such as Clout or Subwaynet, Grime Time Magazine does not follow a strict guideline. Yes, each issue of Grime Time features similar exposés, but each has its own focus.

The first issue, which features Thor THC on the cover adding details to an unfinished piece, has many photos of the city’s finest writers, but also includes some of Chicago’s gang graffiti, an inspiration to many artists’ first attempts.

The second issue features “shitty graffiti”, as stated on the cover, showing photos of toy graffiti and dumb sayings worth a good chuckle, but much of Fact’s graffiti can be found throughout the issue. There are other photos included, but it just seems a bit too much of a one-man show no matter how relative to reality it is.

“It’s all a building process,” says Ghetto P. “It started from a small zine, then I started working with full size zines for issues three and four.”

The third issue can be considered a memorial to fallen writers Soler, Mane and Binker. Also featured is an extensive interview with old school Northside writer, Dvee One.

The fourth issue is the first to include advertisements. It features a straight letter on the cover that reads “Fuck The CTA” and has an extensive look into a four-day road trip to St. Louis and a spread of Chicago hand styles with examples from the old and new school.

“I can do an issue a month,” says Ghetto P. “Right now I don’t have a print hook up, so I’ve put (the magazine) in the back seat, but I’m trying to use whatever resources to keep Grime Time going.” 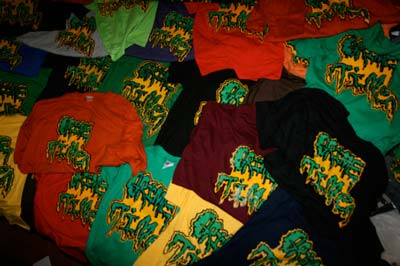 A year into Grime Time, t-shirt designs with the magazine’s logo of melting green letters with yellow background were printed in various colors by this place. Having a good printing hook up is equal to being blessed in this industry.

“Once the first round come out, people loved it,” says Ghetto P. “It just made me think that there was a lot more that could be done.”

Now backed by a small collective of artists, ex-graffiti writers and a t-shirt printing press Grime Time Magazine has grown into a Chicago underground brand.

“It’s an underground magazine as it is,” says Greg Penrice through email, who works along side Ghetto P fashioning t-shirt designs. “You have fans and contributors who know a good deal about it and love it on various levels. Regular citizens seem to enjoy the underground culture… even though they may not understand or agree with aspects of the graffiti art form.”

Some of Grime Time’s popular new designs include a Graffiti Blaster van with Grime Time painted on its side. Another is an alley scene where Sesame Street’s Oscar the Grouch is hiding in his garbage can with smoke escaping up towards the Grime Time lettering; Cookie Monster and the cityscape are in the background.

Grime Time has recently unveiled new t-shirts with glow in the dark designs. They also have limited edition poster prints designed and signed by the artists themselves.

Although the brand carries on through alternative means, Grime Time continues to find small commercial success setting up booths at gallery shows, local festivals, parties and anywhere else it can squeeze in. Since the first day, advertisement has been through word of mouth.

“This is just the tip of the iceberg,” says Ghetto P. “You have to take it one step at a time.”

If you would like to purchase Grime Time merchandise you can visit them at the Grime Time Magazine page on Facebook and visit grimetimemagazine.tumblr.com/ to view pictures of updated merchandise.