“Claudio, what are you Italian or something?” “You must be, like, third generation, you don’t have an accent.” I am a second- generation Mexican, the s on of an immigrant entrepreneur father who gained residency in the seventies b y exploiting a loophole in the system and going through Canada. I was named after my grandfather and raised in predominantly Mexican neighborhoods . I am the only one of my two siblings who speaks proper Mexican Spanish. I was a pale boy with auburn hair, which earned me the nickname amongst my father’s family of gabachín or little gabacho (for non-Spanish speakers that means “little white boy”).

I have never considered myself an ethnic person; in fact, I would consider my lifestyle and attitude towards things typically American (apathetic). That is until the immigration debates in the earlier part of this decade. Suddenly, I found myself torn between the culture that I was raised in and the culture that I was nursed in. I finally took a stand. 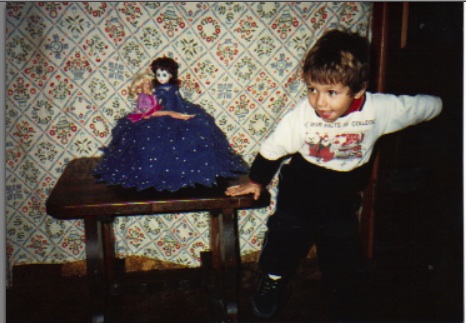 It happened in the middle of a heated debate in a public policy class in college. One student stated plainly that all immigrants should simply be sent back to their country of origin. I took offense and replied, mentioning how everyone in this country is an immigrant unless they are Native American. Suddenly, the entire classroom was divided with the professor playing devil’s advocate. I didn’t realize that I actually cared about this topic and the wheels in my head started turning. How would I define myself? What would I call myself? Latino? Hispanic? Chicano? Mexican-American? I settled on a term used by Mexican immigrants to define the children of immigrants born in the States: Pocho .

It leads to the real question: What does being a Pocho mean to me? It means that I know where I came from. Unlike most of the gabachos in my midst, I can trace my roots and from time to time embrace them. It means listening to Spanish music full blast in my car, not celebrating El Cinco de Mayo, knowing that Corona is not the end all and be all when it comes to Mexican beer, speaking Spanish with my family in front of white folks to make them uncomfortable, rocking huge belt buckles and cowboy boots, getting better service at restaurants with Mexican waitstaff, rooting for the Mexican soccer team (El Tri) whenever they play against Gringolandia, pulling the Latin lover card on women, and finally, and most importantly, it means sticking up for the every day voiceless immigrant. I have something that they don’t have: a voice and a vote.

While I may not “sound like a Mexican,” rest assured I am!

8 thoughts on “You Don’t Sound Mexican”