This Saturday July 30th, Teatro Vista celebrates its 21st anniversary at the National Museum of Mexican Art.  The “theater with a view” boasts it is “the largest, non-profit-equity, Latino theater company producing full scale, Latino oriented, theatrical productions in English.”  The celebration will include a DJ, a raffle, food, drinks (befitting a 21st birthday, board member Gabriela Garcia points out), and sneak previews of two plays- “Mama’s Boys” and “Fishmen” by newest resident writer, Candido Tirado, an import from the Bronx.  More details on their website, TeatroVista.org.

Edward “Eddie” Torres, who co-founded the theatre company with Henry Godinez in 1989, describes the theater’s vision as sharing Latino cultures. Torres proclaims, “Latinos are comprise of everything, we are African, Indigenous, Asian, European”, and Vista strives to be inclusive. The company has a history of putting forth plays that reflect the diversity of Latino-American heritage and the blending of cultures, as in 2009’s tongue-in-cheek “Our Lady of the Underpass.”

Teatro Vista has not shied away from controversial themes or innovative devices, taking risks that receive mixed reviews.  Past productions include “El Grito del Bronx”, a dark and violent commentary on the effects of domestic abuse, and 2004’s “Electricidad”, described as a ‘Spanglish’ version of Euripides’ Electra.  The theater also participates in community outreach such as youth theater programs, free productions for low-income audiences, and “talkback” sessions with the goal of reaching out to young people through art. 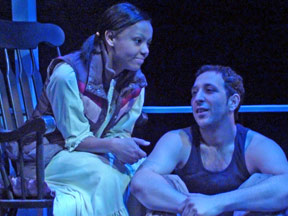 Torres says that his love for theater “goes way back to High School”, when he saw a performance of Latino Chicago. It was the first time he saw Latinos represented in the theater, heard things “from our point of view”.  His passion is for the theatrical arts, and the connection to heritage is “icing on the cake.”  The theater was founded in 1989, “at a time in Chicago when we were starting to address the issue with color blind casting, where the part goes to the person who best fits the role.” Torres found this a noble concept in theory but felt that in order to promote equality, actors and writers “of color” needed the support, the training “to get them there,” onto the stage. So part of the purpose of Teatro Vista, he says, is to provide a place for emerging artists “of any age”, as well as more established thespians, to express themselves and develop their skills.

Garcia, who joined the board approximately two years ago, says she had a similar realization, while working out in LA.  She describes the bizarre (yet all too common) experience of being told, “you should be this way or that way, ‘you don’t look/talk/act like a Mexican’, when in reality, there’s lots of different backgrounds and cultures” that describe a Latino heritage. Garcia believes that in order to change racial dynamics in entertainment, the burden lies with “the decision-makers, the producers and funders” to introduce the audience to Latino actors and writers. With the US population of Latinos at over 16% and growing, as communities here and elsewhere become more integrated, there is indeed a large, expanding audience of people interested in art that expresses a Latino perspective.  Yet Garcia acknowledges that there can still be a tendency in mainstream to cast Latinos in stereotyped roles, which is why, to her, Latino-oriented theater companies like Vista are so important.

Torres says that over the years he has noticed a “vast improvement” in the visibility and participation of
Latinos in arts and entertainment, including more Latino-oriented theatres (like Latina-focused Teatro Luna and the Spanish-language Uran Theater company) “doing their thing”.  He says “It’s really wonderful, giving people an opportunity to use their voice.”  Teatro Vista has changed and grown over the years, and to Garcia, this 21st birthday bash marks that the theater is “really grown up, and we’re gonna go all out.”