Water can be a calm presence of rain, it can be strong and destructive as waves and sometimes… it’s just for cleaning dog shit from your tiled driveway. 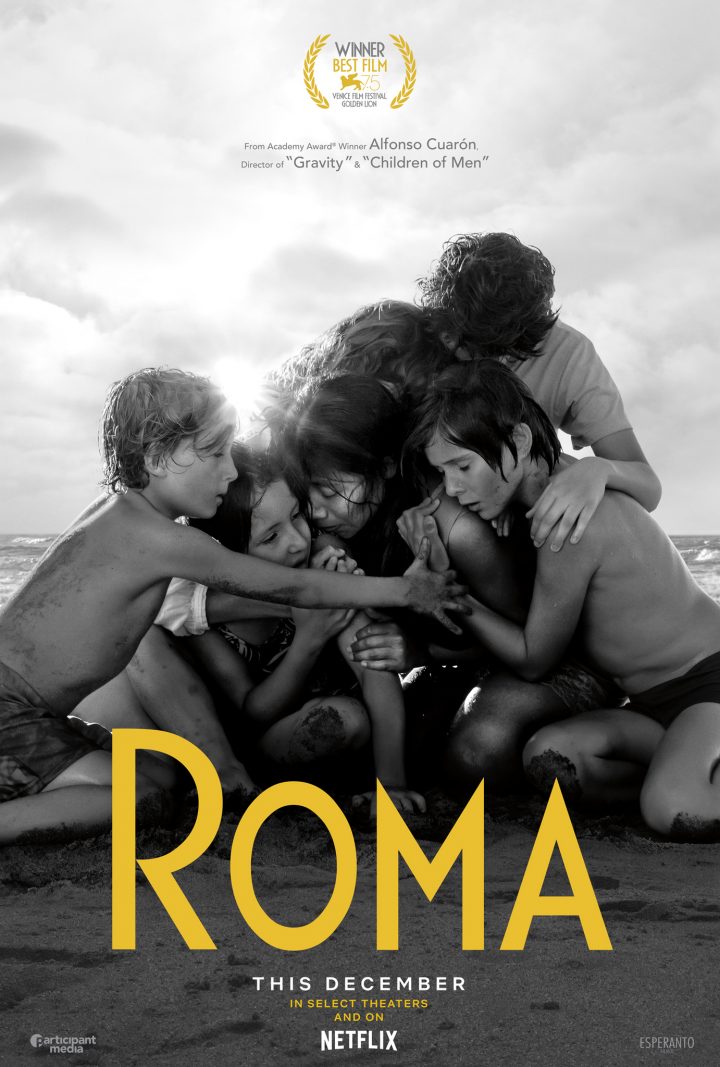 After Cuaron’s 2013 Oscar Award winning outer-space thriller Gravity, audiences waited to see what the Mexican film director’s next picture would be. Inspired by his experiences growing up as a child in 1970s Mexico City, Roma, a semi-autobiographical Spanish drama, has appeared. As if that wasn’t personal enough, this is Cuaron’s first project since 2001’s Y Tu Mamá También in which he is director, producer, and editor. This is also the first time Cuaron has ever been the only writer on a project, usually collaborating with family, and his first time as cinematographer.

Although this is Cuaron’s first time acting as cinematographer, there is little doubt that he nailed it. Roma is truly a beautiful film.

In Roma there are moments where the film is shot so masterfully audiences will easily feel like it’s not a film so much as a memory that the director has shared with us, giving us a feeling of intimacy with the characters.  Cuaron has a talent of making his films feel like novels. It makes a person want to pause and watch every scene because so much is going on you don’t want to miss anything.

When the story begins, the first thing that is immediately noticeable is that the film is in black and white. This is a huge risk for films nowadays. However, for Cuaron’s Roma, it works magnificently. Roma feels like a classic film without feeling like a retro movie.

The film is set in Mexico City, in the neighborhood of Roma, between 1970 and 1971 and follows the life of a middle class Mexican family through the perspective of their live-in housekeeper, Cleo (Yalitza Aparicio). The film starts off innocently enough, with Cleo cleaning the tiled driveway. The audience sees her going through the motions of a house maid with her fellow co-worker and friend, Adela (Nancy Garcia). Cleo picks up the kids, does the laundry, watches after the dog. It’s all methodical and yet it keeps us interested thanks to Cuaron’s cinematography and strong performances by the entire cast.

Soon, you start to notice how much Cleo cares for this family, particularly at the end of the first day when she is putting the children to sleep, each with an “I love you,” and the next morning when she gently wakes the children with a song. As the film progresses, we begin to realize that it isn’t exactly paradise in this house.

Throughout the film, not only do we follow the family on trips, holidays and day-to-day activities, but, we also follow Cleo more intimately when she’s not with the family. She goes out on dates, with friends, by herself and even though Roma revolves around Cleo, she doesn’t say much. In any other film she would just be a background character but Cuaron shows us that every character in a film has a story.

At one point Cuaron even gives us a fake out with a scene featuring the early return of the father figure, Antonio (Fernando Grediaga). Antonio arrives in a wide Ford Galaxy and in a wonderful scene we’re exposed to what feels like a larger than life man meticulously driving in and out and backing up over again just to get the car parked perfectly. As the scene plays out, classical music is heard playing in the car and then, when the car is finally situated just right, Antonio puts out his cigar and you imagine this grand intimidating man about to come out of his car.  Instead, though, out comes a regular man… and the film carries on.

Later, in a moment between the father and the mother, Sofia (Marina de Tavira), as he is leaving for a business trip she tells him that they will be waiting for him and he replies with a stern, “It’s only a week.” Both of these moments stuck out to me because in any other film, they would be driving points, and in a way they are but, they just take a back seat to what Cleo is experiencing.

Cuaron also has a beautiful running theme of water through the film, showcasing it to be just as adaptable as Cleo must learn to be. Water can be a calm presence of rain, it can be strong and destructive as waves and sometimes it’s just cleaning dog shit from your tiled driveway. The absence of water is just as important. It is something people often don’t realize how much it does until, there is a fire. Like Cleo, water is taken for granted.

Roma is an incredible film about life and about how no matter what happens, life keeps going. Even though it will be available on Netflix starting Dec. 14, Roma will also be receiving a limited theatrical run starting Nov. 30. I strongly suggest a trip to the theaters to watch this film as the director intended.