On a long walk home from work one afternoon, I began contemplating some of the elements of Chicago I knew about but had never actually seen until taking this new route… like the hubbub surrounding travelers near the Greyhound station or the community of people living in tents by the river. Later that evening while watching Tigers Are Not Afraid / Vuelven (México), a horror fairytale by Issa López, I encountered that similar feeling – knowing that certain things exist without actually ever having seen them. Vuelven will be shown as part of the Chicago Latino Film Festival on Friday, April 6 and Sunday, April 8 at AMC River East 21 Theatres (322 E. Illinois St.) Details at CLFF. UPDATED to add new showing: April 19 at 9:15PM. 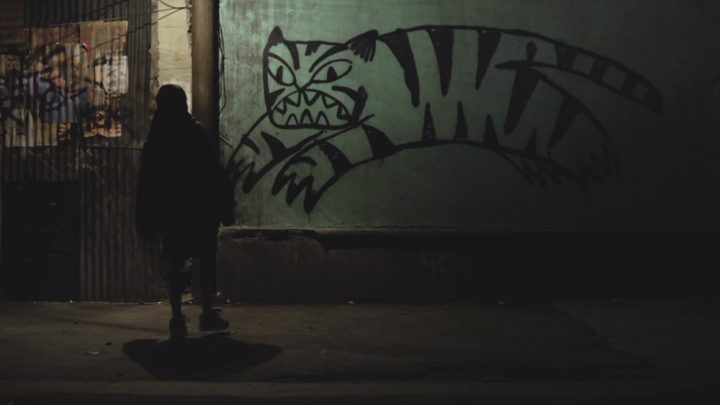 Vuelven tells the gripping story of Estrella, an imaginative young girl trying to survive her ten-year-old life through the harsh reality of her brutally violent city in México. The film opens to a now far-too-often reality happening at schools across the US. Many will empathize with the almost palpable fear.

Estrella feels forgotten in the world after suffering a personal and terrible loss. Alone and hungry, she decides to seek out a group of young rebellious boys she’s seen huddling on the rooftop of some of the buildings left abandoned due to the drug lords taking over their neighborhood. At first, the huerfanos shun her away (because she’s a girl- ugh!) and eventually realize she has also been abandoned to face life on her own, just like them. They allow her to stay with them… but, only after she is forced to commit a crime.

Although this is a horror film, it doesn’t throw it in your face with typical splatters of murderous crimson. Instead, through Estrella’s vivid imagination (and powerful direction by Lopez), we are reminded of life after death and all the creepy things that are apt to exist in the spirit world.

We are also reminded of the terrors of real life, with some truly shocking moments throughout the film. (I personally don’t recommend this movie be seen with children.)  It is a children’s fantasy horror… for adults.