Organizers announced the final lineup of bands and DJs, artists, restaurants and kid’s activities for the 8th Annual Pilsen Fest. One of the city’s most culturally rich neighborhoods will be on full display when the renowned arts and music festival stakes a spot along four blocks of Blue Island, August 18th and 19th. Reflecting the unified spirit and creative talents of its eclectic community, Pilsen Fest 2018 will give the anticipated 60,000-plus attendees an experience deep-rooted in cultural artistry and local Latino heritage. As always, Pilsen Fest features Grammy award-winning musicians, local cuisine, cutting-edge art, children’s activities, and handcrafted goods. The outdoor street party, which only requests a $1 gate donation fee for admittance, also promotes cultural literacy and health and wellbeing through key partners like the bilingual magazine El BeiSMan and the Pilsen Community Market. 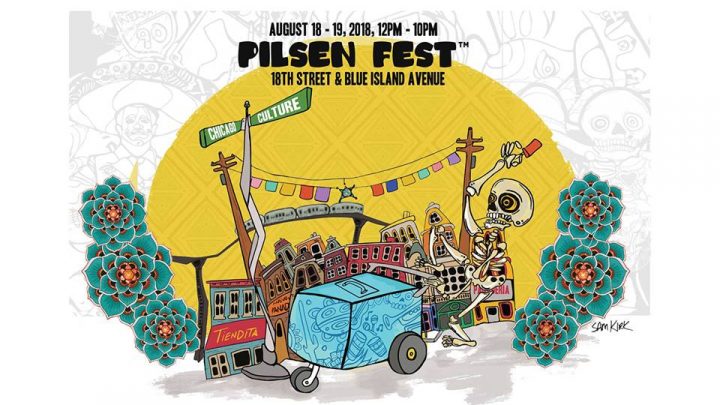 Pilsen Fest offers a vast array of musical genres and styles on three stages headlined annually by Grammy winning and Latin Grammy winning acts. The 2018 edition also gave local singers, songwriters, bands, soloists – and DJ’s – an opportunity to compete each week for a spot in the Pilsen Fest music lineup. The full weekend music lineup is as follows (for more information on anyone listed herein, contact grimaldipr@gmail.com):

One of the ways Pilsen Fest promotes cultural literacy is through a live poetry exhibition called The Spoken Word. Each night right before the headliner’s set, local accomplished writers take to the main stage to recite their profound works. Saturday’s featured artist, who will be presented with Pilsen Fest’s 2018 José Revueltas Award for Literature, is Raúl Dorantes – a resident playwright of Colectvio El Pozo. Dorantes is credited with nine original works presented by Colectivo El Pozo since 2009, staging Spanish-language original theater works that capture the reality of immigrants in Chicago.

On Sunday night, T (Tee Muñoz), non-binary, queer, brown, poet and visual artists, will take the stage. They use their art as a form of resistance and protest, and hope their work causes audiences to reflect on how the uncomfortable realities of marginalized people can be lived through it all. According to T, while calling for action is essential, being able to be aware and breathe through pain is the first step.

Inspired by the artistic zeal of Pilsen, one of Chicago’s most underappreciated art scenes, art is also a central focus at Pilsen Fest. Like the music, the Art Pavilion is always one of the main attractions, featuring the artwork of some of the Pilsen area’s most prominent local visual artist. In addition to over 40 local arts and crafts vendors, Pilsen Fest’s featured artists this year include the following (with the first four artists listed being the newest additions announced in this release):

Featured performance and theater artists as well as LatinX authors (announced in this release) at Pilsen Fest this year include:

A taste of Pilsen’s thriving culinary arts scene is also among the many highlights at Pilsen Fest. Such as will be the case at the Food & Spirits Pavilion. This year’s featured vendors are:

Empowering children to embrace their cultural identity in fun and artistic ways is one of Pilsen Fest’s main objectives. There are many opportunities this year for kids to partake, including the following (with the first three activities listed being the newest additions announced in this release):