Conversing with Omar Sosa is an immersion in a heady whirlwind of ideas tinged with sonic delight, as the renowned pianist’s voice swings the syllables of the Spanish language with that particularly Cuban melodic beat, punctuating comments about art, music and the cosmos with frequent hearty laughs. 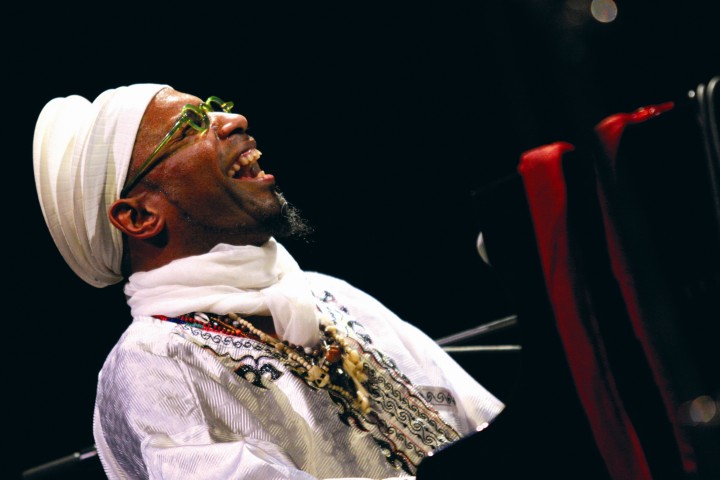 Speaking via phone from Seattle on the tour that will bring him to Chicago this weekend, the 7-time Grammy-nominated and Smithsonian Institution Lifetime Achievement award-winning artist explains how his latest studio album came about: “When I create a recording, I think first of its direction. and prepare almost like a philosophical manual–the why of the project, its purpose. More than the music, it’s what do we want to say through music”.

Sosa continues to explain the album¡s title, ilé: “It’s the only title it could have! It means home, land, Cuba!” He describes that album was inspired in traditional Cuban rhythms and created in collaboration with fellow Camagüeyanos, Ernesto Simpson on drums, and Leandro Saint-Hill on alto saxophone, flute and clarinet, as well as Mozambican electric electric bassist Childo Tomas – collectively known as Quarteto AfroCubano.  Sosa describes that that he and Simpson (whom he has known since he was five years old) felt the need to make a record based upon the sounds of their childhood–danzón, cha cha cha, conga, bolero–but “deconstructed” and viewed through their current, and cosmopolitan vision.

With his recorded music as the Quarteto’s live performances, Sosa explains, he strives to develop a dynamic ritual which has the capacity to evoke deep, visceral emotions.  This does take a special group of musicians, he adds. On the one hand, as an ensemble they are all deeply committed to the African essence and legacy. Additionally, they have particularly close communication with each other, says Sosa: “We each enjoy each other and what we are doing and creating. It’s like a basketball game, passing the ball constantly…someone will eventually put the ball in the basket, but it doesn’t have to be me.”

And at the heart of it all, Sosa affirms passionately, is the desire he feels to manifest the unity of all cultures and all roots, expressed in the particularly free way that jazz allows: “You play what you feel and for me that is jazz, the philosophy of freedom. And it is important to have a spiritual connection with the person you are making music with–this is essential in our band, and its only requirement, so we can say what we want to say with harmony, light, peace and love!