Like many a filmmaker before him, Fede Alvarez was bit by the movie bug at a young age. But while those filmmakers would grab their parents’ Super 8 cameras to shoot reenactments of their favorite films or original stories of their own, ten-year-old Fede opted for something a bit more challenging: he started making stop-motion shorts in his family’s camcorder in his native Montevideo. Twenty-nine years later, his four-minute short Panic Attack!, made for less than $500, would inspire a bidding war in Hollywood that ended with a seven-figure deal with Ghost House Pictures, Sam Raimi’s production house. That led to Fede taking the reins of the Evil Dead remake a couple of years ago, a $17 million film that brought in more than $100 million in the international box office. Alvarez and co-scriptwriter Sayagues follow that gory supernatural extravaganza with the more tightly wound thriller Don’t Breathe.

Rocky (Jane Levy) and friends Alex (Dylan Minnette) and Money (Daniel Zovatto) are not exactly your happy-go-lucky, horny victims of the traditional slasher movie. They have pulled off a series of successful home invasions in the Detroit metro area in large part thanks to Alex having access to the keys and codes from his father’s security company. They are callous and contemptuous of their victims to the point that, in the opening sequence, Money even pees in the living room of one of the homes they break into. When Money finds out that an old war veteran (Stephen Lang) living in an abandoned neighborhood has received a hefty settlement in his lawsuit against the family of a teen who ran over his daughter, they decide to pull one “last job.” The fact that the man is blind doesn’t face them: they want that money so they can get out of Detroit once and for all. What follows is a tense and violent game of cat-and-mouse, as the Blind Man proves to be more resourceful than they imagined and the trio discovers a secret in the basement that their victim is willing to kill for. Who the woman being held captive in the basement is and the reasons behind her captivity are two of the disturbing twists that force us to shift our sympathies back and forth between perps and “victim.” There are no good guys or bad guys here: just prey.

Alvarez heightens the sense of dread and uncertainty through the use of highly amplified sound and body movement as the characters dance around each other, trying to escape the Blind Man’s grasp. The camera glides around them and around these grimy, dark rooms, keeping most of the potential terror off screen until it finally erupts in front of our eyes. The violence is brutal, physical, but not needlessly gory. It makes you uncomfortable, especially that final twist with its intimations of rape.

Fede Alvarez visited Chicago recently to present his film at the Bruce Campbell Horror Film Festival celebrated in association with Wizard World Chicago at the Donald E. Stephens Convention Center in Rosemont. We spoke with Alvarez about genre filmmaking in Latin America and his film. What follows is an edited transcript of the interview translated from the original Spanish:

Why is genre cinema enjoying such a renaissance in Latin America and Spain?
In some countries it is enjoying a resurgence while others are actually giving birth to genre cinema since none was produced before. Cameras, computers, all the basics that you need to make a film, cost less. Today, if you are patient and have a good story to tell, you can shoot a film with a smartphone. In fact, it was done already: Tangerine was shot with an iPhone. It tells a great story that hooks you. Back in the day, Latin American cinema was funded by these government funds created to protect their culture and that implied making films that only spoke about your culture, your country, your idiosyncrasy and genre cinema did not fit those parameters. Most filmmakers grew up watching Hollywood films, genre films and they want to make that type of films. Thanks to the democratization of film, filmmakers are free to produce a wide variety of films.

Yet, most of that genre cinema coming out of our continent is firmly rooted in our culture. It proves that you can produce genre cinema that has a specific cultural context.
Absolutely. In my case, the fact that I am from Uruguay gives me an entirely different point of view. I can shoot a genre film in the United States that feels different. There is a texture to the characters, a shooting style that is completely different. And that comes from whom I am, from where I was born, of having grown up in a Third World city like Montevideo. And that is why I chose Detroit as the setting for the film. Ii is the one city in the United States that most reminds me of Montevideo, a city that enjoyed its glory days back in the 50s and is now a pale mirror of what it once was. Detroit has that Third World feel to it. 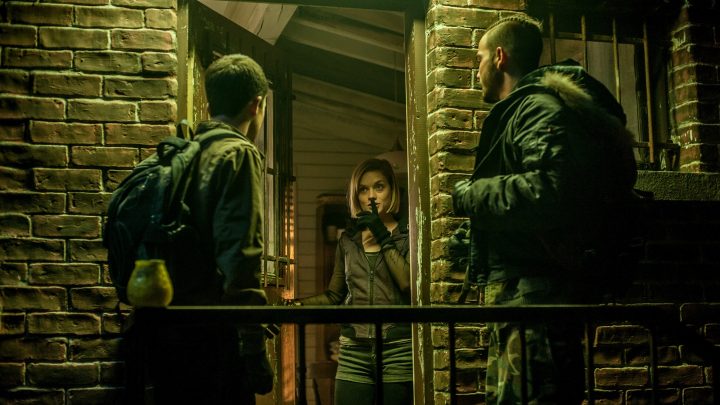 Even though Don’t Breathe seems to follow both the traditional slasher and home invasion film formulas, it also toys with our expectations by adding a healthy dose of moral ambiguity. Our three thieves are not exactly folks we can root for. And you carry that ambiguity straight to the end.
Being robbed by thieves is one of the things one deals with on a daily basis in Uruguay, maybe not on a personal level, but at least through the experiences of others. You always hear things like “thieves broke into my grandmother’s house” or “my car was broken into and my radio stolen.” It’s something that one gets used to in our countries. I was fascinated by those characters, by the fact that people love to hate them. Cinema has the potential of introducing you to characters you wouldn’t get to know in real life. When the trailer was released online, I was surprised by the number of comments that went along the lines of “Why would I bother to see a film featuring three unsympathetic thieves?” Based on that argument, you would never have seen any of Hitchcock’s films. Hitchcock constantly featured morally ambiguous protagonists in his films. I mean, Janet Leigh in Psycho steals, right at the beginning, the money belonging to a man who wanted to buy a brand new house for his soon-to-be-married daughter. And we stay with her throughout most of the film, we want her to get away with it. When you have characters like that, it becomes more difficult for the audience to decide who gets to live and who gets to die, who deserves to be punished, who deserves to keep the money. Films are a powerful force and explore strong moral themes. And you have no choice but to stick with the story until the end. And the end may not be fair but nothing in life is.

The Blind Man (Stephen Lang) is at first portrayed as the victim but his character arc is far more complicated than that. He is and he is not a monster. How did you prepare Stephen for the role?
He did most of the prep work. He memorized all the steps he had to take in that house, from the kitchen to the living room, things that a blind person would exactly do in a place like that. To tell you the truth, he is literally acting blind since he has to wear these contact lenses that left him completely sightless. At the same time, you have to believe that he is a war veteran and Stephen has played military men previously, especially in [his solo show about war vets] Beyond Glory. He knows about their mentality, their code of honor, how they move, how they speak. I was merely there to help him draw out those emotions that he was clearly evoking but that the camera wasn’t capturing. It was a real pleasure to work with him; he made my life so much easier. 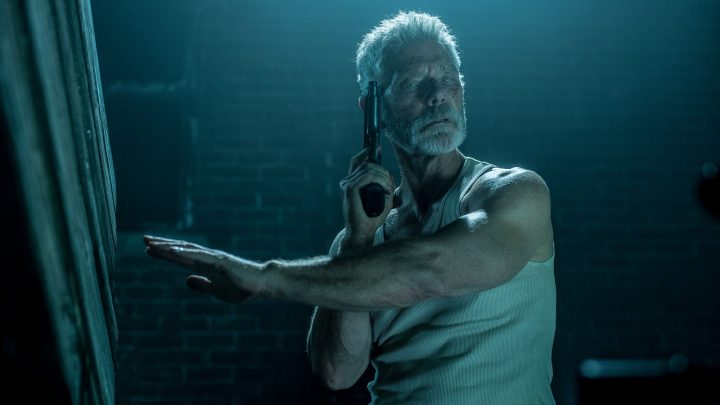 One could say that the house is also a character in the film. How much of the film was shot on location, how much was shot on set?
We shot all the exteriors in Detroit, chose the house that we wanted to shoot in and on a sound stage in Budapest we completely recreated the house, including some parts of the street, to the point in which you can’t tell which scenes were shot in Detroit and which inside a sound stage. The transition between exteriors and interiors is quite organic. Production designer Naaman Marshall is a genius, he gave us a house that truly felt lived in. If you pay attention, you will see that the walls look worn out, that there’s this line, at the same height, throughout the walls, from the finger marks that the Blind Man has left after years of using the walls as a guide. There are thousands of tiny details like that one that make the house feel truly lived in and that tell you the story of this Blind Man. By the end of the story, you feel you know him, his motivations, you understand what’s been through, his life.

You feel that this is a man who is still strangely committed to that neighborhood, to that street. He won’t move from there, this is where he grew up, where he raised a family.
He is the last man standing. It’s a combination of two things: first, there are families that cannot move because they have a disabled family member living with them, who may find it difficult to get used to a new environment, a new house. For a blind man who knows this house by memory, it might be harder for him to get used to a new place. But there is also what you said: this is a man who believes in a code, who respects his city. He was born there and there he will die.

He may have kidnapped Cindy and kept her trapped in the basement, the way Elizabeth Smart was kidnapped [by Brian David Mitchell] and so many other women before and after. But I couldn’t help think of those disappeared by the military dictatorships in South America as well. Cindy, in fact, has been “disappeared” by the military.
You are right, I never thought of it in those terms. People here in the United States sometimes ask me, “it seems implausible that she went missing and nobody ever found her” and I say (laughing), “it may not happen here but where I come from, it was done and there are still many who are disappeared and will never be found.” It has happened in our countries and we know it can happen anywhere.