Like his New German Cinema compère, Werner Herzog, Wim Wenders has produced and directed far more documentaries than fiction films in the last twenty years. And, like Herzog, the critical reception to his most recent fictional work (Submergence, Everything Will Be Fine) has been lukewarm at best while his documentary films (Pina, The Salt of the Earth) have been praised for their formal daring and subject matter. But while Herzog’s documentaries focus on individuals and communities under duress (environmental, social, technological, etc.) or gaze with awe and wonder at nature’s power, Wenders focuses on individuals, particularly those he most admires. And there is no one that Wenders holds in higher esteem, at this point in time, than Pope Francis.

However, Pope Francis: A Man of His Word is not an entirely hagiographic enterprise (although Wenders’ Herzog-like voiceover comes close to canonizing him). It is the record of a man’s thoughts and philosophy, one that embraces science, literature and social justice as well as religion, a view of the world that is borderline humanist. Wenders claims to have had carte blanche to do whatever he wanted (including full access to the Vatican’s archives) and it shows. Structured by topics, Wenders and his writing and editing team complement Wenders’ own interviews with the Pope with hours and hours of footage compiled not only from the Vatican’s official television channel but also from other media outlets to provide us with a full picture of this man’s impact and rock idol-like popularity that goes beyond the 30-second soundbites that we usually get.

Early in the film, Wenders shows us a very brief glimpse of the man formerly known as Jorge Mario Bergoglio early in his career, standing in Buenos Aires’ Plaza de Mayo in 1999 as he addresses a racially-mixed crowd. One wishes that Wenders had spent some more time with Jorge just to see how his ideas evolved over time before he became Pope. But what the director pulled out from his four interview sessions with Pope Francis, shot over two years in Vatican grounds, provide a good grasp of how those ideas finally took shape. Shot with documentarian Errol Morris’ Interrotron (a camera that allows the interviewee to stare straight at the camera while seeing the interviewer’s face on a screen), Wenders creates the illusion that Pope Francis is speaking directly to us. Francis’ jovial, down-to-earth style charms you from the moment he sets eyes on you; yes, this is a rather one-sided conversation but it’s one that Wenders and his subject quietly invite you to pay attention to. A 96-minute sermon, this ain’t. 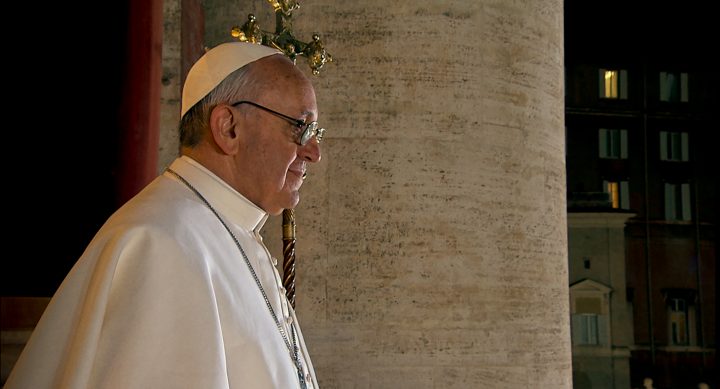 Whether it’s the damage we keep inflicting on our planet, the Church’s millennial obsession with wealth (although, without naming names, Pope Francis at one point makes a sly reference to all those megachurches that have sprouted throughout the world) or the refugee crisis, all his topics circle back to the one core concern that drives his mission as leader of the Catholic Church: to address the inequities that separate the large number of have-nots from the small number of haves. Even when he speaks about education and culture, about our ability to “create,” he connects the dots and shows how it all goes back to that abyss that separates the rich from the poor. His is a call to action, one that Wenders makes clear the Pope himself is following in the footage selected. We see Pope Francis visiting the favelas in Brazil, addressing workers’ rights in Bolivia (in one of his interviews with Wenders, Pope Francis refers in Spanish to what he calls the three Ts: trabajo, tierra, y techo—work, land and a roof over our heads), washing the feet of prisoners in a prison in Philadelphia, offering succor to the victims of a typhoon in Taboclan City in the Philippines, etc. You can almost feel the weight on his shoulders as he bears witness over and over again to what he calls the “globalization of indifference.” You can even feel that “globalization of indifference” take hold of our members of Congress when, during his 2015 speech to Congress, the camera cuts back to Paul Ryan’s smug face and Marco Rubio’s apparently tearful one. Given what we’ve been through this past year and a half, you know Pope Francis’ words fell on deaf ears.

The documentary does address, albeit briefly, his stance on homosexuality and the Church’s actions in defending those priests accused of pedophilia via one of the many press conferences the Pope held on the papal plane: a missed opportunity if ever there was one (I should point out that Pope Francis: A Man of His Word opens the same week that Pope Francis is meeting with Chile’s bishops to discuss the recent cover-up of sexual child abuse in that country’s Church). Another misstep is Wenders’ decision to underline Pope Francis’ connection to his namesake via a series of black and white vignettes shot in the style of a 1920s film recounting the life of St. Francis. The vignettes feel tacked on, an unnecessary attempt to make this a more cinematic experience: the power of Pope Francis’ personality, his earnestness, his occasional rage against the injustices are more than enough to do so.

His holistic approach to faith is one that embraces all creeds, one that doesn’t believe in tribes. At times, it seems to echo liberation theology’s key tenets. Wenders shows us a quixotic figure who, given our current political environment, is tilting against the windmills of intolerance, fascism and racism. Pope Francis: A Man of His Word is a balm for the soul, for the intellect and for these dark ages that we live in.