I have seen several articles about the Latino vote that focus almost exclusively on the Latinos who voted for Trump – expressing emotions ranging from outrage and disbelief to shock that the Latino firewall didn’t save the world. According to CNN 33% of Latino men and 26% of Latino women voted for Trump. Latino Decisions and the National Council of La Raza disputes these numbers, putting the total closer to 18%, based on their own polling.

I’m tired, everyone. I don’t know what the actual number is. I don’t know why the Latinos who did so voted for Trump. Some of the non-Mexicans voted for him because they hate Mexicans. They hate people like me and that hatred was more important to them than the fact that most Republicans think all Latinos are Mexican anyway. Some heard his speech about Mexicans being rapists and heard him say some were good people, decided they were the good people, and fuck everyone else. In a moment when it is important for everyone to take stock and confront discrimination, it is hard to know how to reach out to the people you thought were your community about their bigotry – or how to protect yourself – when all of you are treated as a monolith of the same voting bloc. People from different countries, socio-economic statuses, race, sexual orientation, generation, U.S. region – all lumped as one Latino voting bloc. 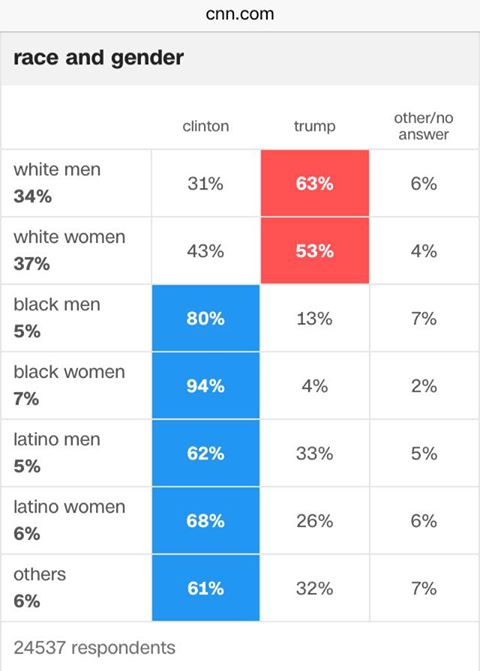 Before the polls even closed, we were already seeing posts on social media painting Latino voters as a threat to Clinton. The following tweet is from an article that is actually about Latinos packing polls to vote for those in our community who couldn’t vote. But this is how DNAinfo chose to portray the article on social media: 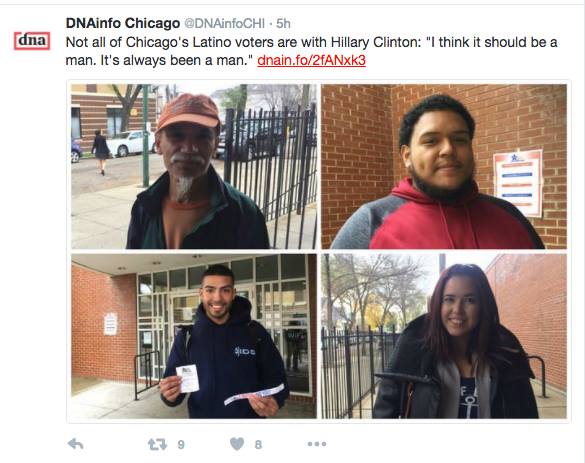 A sexist quote from a Latino voter is the one they decided to pull from an article where most voters they interviewed were in support of Clinton. I think that Latino Decisions and National Council of La Raza are quick to challenge the numbers because they realize how harmful the perception that Latinos supported Trump, especially over a female candidate, is to our community as a whole because of the stereotype of the sexist Latino. It is ultimately easier for white liberals to get angry at and blame minority voters than it is for white liberals to stand up to their racist white conservative relatives and friends. And this has repercussions.

The idea that Latino men especially are sexually oppressive is not an idea that is unique to Trump’s campaign. White liberals also fear more Latinos being able to vote for this same reason. The tendency to cast Latino voters as inherently conservative is a reason behind the scenes that more Democrats don’t push for a pathway to citizenship or the vote for us. They are scared of us fucking up their voting districts with all the stereotypes they have of our machismo. These stereotypes have been a major roadblock to immigration reform.

The first time I encountered this attitude, I was at a reproductive rights conference in Amherst and a white girl from Texas stood up and asked how she was supposed to advocate for abortion rights in Texas when there were so many Latino voters. My ears hot, I stood up and reminded her that she shouldn’t assume that all Latino voters wanted the same thing. Concern on the part of white women about what an increase in Latino voters would mean for their rights has been one that I have heard many times over the years.

This is something that white liberals and white conservatives have in common. Why is Amy Schumer surprised that as a comedian who makes jokes about Latino rapists and who tweets out that men of color are more likely to street harass, there are Trump supporters in her audience? Never mind that sexual harassment of women of color by white men is racialized and thus likely invisible to white women or not viewed by them as really about sexism because race is also involved. The white patriarchy relies on white women thinking that their real enemy, and thus the enemy of ALL women, is men of color.

I have lost track of the times a liberal white woman has condescendingly said something pitying to me about how I must have had it really bad growing up as a Latina in such a misogynistic culture. How it must have been so much worse for me than it was for them. That or they assume I am not a feminist because I am Latina and must be oppressing myself because of my culture and need to be rescued by white feminism. (Because advocating for racial justice and immigration reform has nothing to do with feminism, right?)

With the election results showing that the majority of white men and women in this country who voted did so for Trump, an accused child rapist and serial sexual predator, I better never hear anything from white women ever again about how sexist my culture is or anything to the effect that I am oppressing myself. From the bottom of my heart, I honestly right now cannot imagine what it is like to grow up in the kind of environment where you or the people around you could be convinced to vote for a man accused of raping a 13 year old. But I know that part of it comes from pretending that the real monsters are outside of your bubble of whiteness. It seems difficult now to say that machismo is worse than white patriarchy when the majority of Latino men voted for a female President compared to white women.

But when you take into account how effective demonizing Mexicans was, how white feminists also fear Latino men in the fight for their rights, and combine that with how Democrats have cowered year after year at the thought of angering white voters by giving more Latinos the opportunity to vote through immigration reform, fear of the Latino voter won in this election. Specifically, the fear of us being able to vote to begin with.

Democrats had the majority of Congress in Obama’s first two years of being president but failed to push for immigration reform. Rahm Emanuel, as Obama’s advisor, pushed against him touching immigration as the third rail of politics and even though he just declared Chicago a sanctuary city for immigrants and refugees, this is not something we should easily forget. Democrats don’t want Latinos to vote because they think we’ll vote conservative. Conservatives don’t want Latinos to vote because they think we’ll vote Democrat. No one wants us to vote, but when the Democratic Party most needed Latinos as a firewall against the white voters they were trying not to anger by passing immigration reform, there weren’t enough of us to make up for the decades of disenfranchisement they refused to fight against. Not enough of us had been given the vote. Many of us were voting on behalf of several of our family members who couldn’t, family members who if they were given the vote would have voted for Democrats against their worst fears. Some of our households had only one eligible voter. Puerto Ricans in Puerto Rico can’t vote in national elections. Add to that voter suppression efforts against both Black and Brown communities and disenfranchisement through mass incarceration.

The memes circulating on social media with white suffragettes and messages about making history as an attempt to empower women to vote for Clinton weren’t enough to get the white women’s vote when they could instead vote for someone who more openly espoused support for white supremacy. White suffragettes historically demanded the vote to preserve white supremacy and their descendants did not disappoint them. They saw a Black man in the White House and nothing could convince them to vote for the party he led – even if one of their own could become President.

Democrats did not fight for us when they had the opportunity to, and yet the majority of us who could, still came out to the polls to support them. We saw them deny the vote to our family, our friends, our communities over the past decade. But we still came out to the polls because the majority of us knew that what we were voting against would be worse. This was an election focused on white suffragette narratives, where white women were willing to cross party lines at the polls to agree with an accused rapist that men of color are the biggest threat to them. We live in a country where both parties view Latino voters as a threat, where one party demonizes us for political gain, while the other consistently relies on us but refuses to help us beyond a now easily reversible executive action that did not give us the right to vote.

Those of us Latino voters who went to the polls on behalf of our loved ones who could not vote are left wondering, when our votes aren’t enough, how do we move forward?