Brisket or Lechón? Coleslaw or platanos maduros? Lemonade or parcha? It doesn’t matter for artists Dxtr Spits and Lester Rey because at the end of the day everybody eats and we’re all going to stay winning in Black and Brown America. That’s the message both artists want to send in their new music video “Arrachera”, the first song released as part of their collaborative project, Hyphens.

Lester Rey’s smooth hook, “como arrachera,” is the metaphor that playfully announces that people of color across the country are “eating steak,” that we are winning despite the odds, “yo estoy ganando.” The hook is followed by the Dxtr Spits honest and sharp rap verses that paints a clear picture of how these communities are viewed in larger society. “You actin like we just comin to America. You brought us here now you acting like you scared of us,” is about as blunt as you can get. Labor, food, and music are just a few of the aspects of American society that Black and Brown communities have influenced, but in the era of he who shall not be named, that feeling of neglect and rejection of our existences is all too real. Lester Rey reminds us though, “se están quejando porque estoy ganando,” they complaining because we’re winning. We’re gonna get ours. We’ve been getting ours. Black boys are acting out their joy, Latinas are getting their phds, hyphenated Americans across this country are eating arrachera and we are winning together. Dxtr Spits sums it up, “let em throw shade, I’m the sun, boy.” 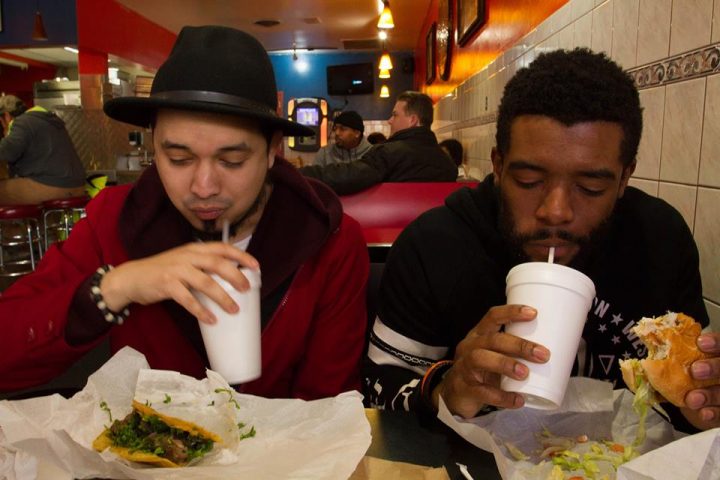 Dxtr Spits and Lester Rey are winning in their own right as one of few solo artists out of Chicago consistently hitting stages and headlines. Dxtr Spits has been performing his poetry and music since 2013, most recently being recognized for his Mad Science parties based off his Mad Science EP. Dxtr is also the founder of ONLi packs, a unique backpack brand set to launch this year. Fun fact: he’s also a scientist. Chicago and Puerto Rico lay claim to Lester Rey’s music inspirations and soulful voice. His music has taken him to stages across the nation including SXSW unofficial and to the headlines of Latina Magazine and Remezcla. While currently spending much of 2017 writing for a new solo project, he can still be found performing in the underground Chicago DIY and Latinx scene.