2018 has been a great year for American political films made by people of color. There is no doubt that films like Get Out and Mudbound set the stage last year for what was to come. And while films like Black Panther and Blindspotting took years to make it to the big screen, their release within months of each other tap into the current political, social and racial zeitgeist. In Black Panther, director Ryan Coogler shows us a world that might have been had white colonialism not left its mark on the continent while smartly using to explore issues of race, identity and disenfranchisement. The vibrant Blindspotting and the go-for-broke Sorry to Bother You are more than impressive calling cards for their first-time filmmakers (writers and actors Daveed Diggs and Rafael Casal and director Carlos López Estrada in the former, and director and writer Boots Riley in the latter); their Oakland-set films imaginatively make the local universal by illustrating how gentrification, cultural appropriation, police abuse and worker exploitation are not isolated to one neighborhood, city or state; they are endemic. Add to the list two films that are about to enter the Fall festival circuit that focus on police brutality: Reinaldo Marcus Green’s Monsters and Men and George Tillman, Jr.’s The Hate U Give. Then, there’s el papa de los pollitos, the Godfather, the man who kicked open the door for dozens of minority filmmakers, the agent provocateur par excellence: Spike Lee, whose new film BlacKkKlansman is a Molotov cocktail flung at multiplexes nationwide.

Based on Ron Stallworth’s 2014 memoir, BlacKkKlansman tells the “fo’ real shit” story about how this black undercover police officer, the first one to be hired by the Colorado Springs Police Department, managed to infiltrate the local chapter of the Ku Klux Klan in the late 70s and befriend the Grand Wizard himself, David Duke. That premise alone would make for a thrillingly outrageous story but Lee, who was tapped by BlacKkKlansman producer and Get Out director Jordan Peele to direct the film, has more in his mind. The story gives him the opportunity to address how racism has metastasized in this country, how American cinema has played a role in spreading this disease in its depiction of African Americans, and what’s the right strategy to combat it —do you work within the system to change attitudes or do you talk about a Revolution as the Tracy Chapman song goes? Lee and his frequent collaborator Kevin Wilmott may have taken some liberties with the story. But what’s on screen is both undiluted Spike Lee and as close a recreation of the actual events as possible.

Lee declares his intent right from the start as he opens with that legendary crane shot of injured Confederate soldiers from Gone with the Wind to immediately cut to a fictional black and white for a propaganda film featuring a pro-segregation advocate by the ridiculous name of Dr. Kennebrew Beauregard (Alec Baldwin), as he fumbles his lines while images of D.W. Griffth’s infamous racist creed The Birth of a Nationis projected on top of his face. This is not the first time Lee uses both films as a reference point in his exploration of racist images in American cinema. But here they serve as a counterpoint to Beauregard’s fumbling; we may laugh at him but the impact these films had in American culture and society is no laughing matter. Some of the KKK members we meet later on may come across as over-the-top racist cartoons; but no matter how much fun Lee is having at their expense, he also recognizes how dangerous their hatred is. 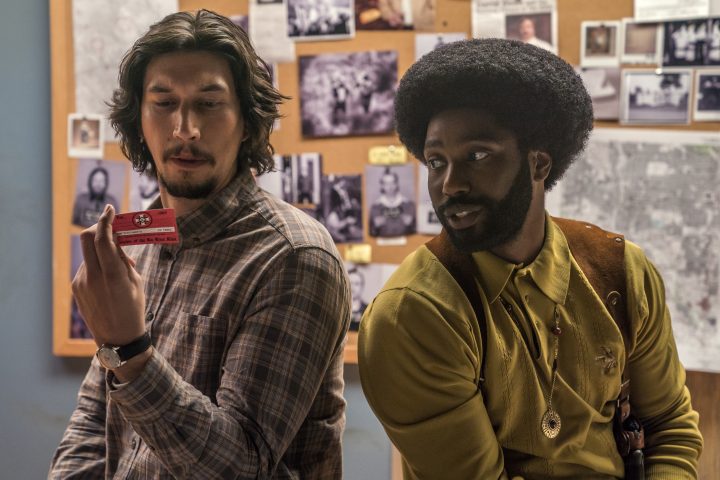 Enter one Ron Stallworth stage left (John David Washington whose voice sounds eerily like his father Denzel’s) who’s told by his superior that he will be “the Jackie Robinson of the Colorado Springs Police Force” as he is assigned to a dead-end post in the Records Department. His wish to work undercover comes sooner than expected when he’s assigned to infiltrate a speech by Black Panther founder Stokely Carmichael, who has adopted the African name of Kwame Ture (Corey Hawkins), in an event organized by the Colorado Springs College Black Student Union. As Kwame speaks, Lee cuts to more traditional reaction shots; as the speech grows in intensity, Lee builds a montage of black faces, two or three at a time, some dissolving into each other. The montage not only underlines Kwame’s exaltation of black beauty. Those students are also us: we are both riveted by the power of Kwame’s words, and in our case, as audience members, by the fact that they are more relevant than ever.

Not only does Ron secures a spot in the police force’s intelligence unit but he also attracts the attention of college activist Patrice (Laura Harrier). One day, Ron sees a recruitment ad for the KKK in the local newspaper and, on a whim, calls the number listed passing himself off as white. A meeting with the local chapter of what the KKK now calls The Organization, in an attempt to become more mainstream, is arranged and since, for very obvious reasons, Ron can’t attend, fellow cop Flip Zimmerman (Adam Driver) is recruited to impersonate him. By turning Ron’s reluctant partner into a non-practicing Jew, Lee ups the suspense ante, especially when it comes to the trigger happy, Jew-hating Felix (an unnerving and frightening performance from Jasper Pääkkönen) who rightfully suspects that there’s more than meets the eye here. It soon becomes evident that Patrice and her fellow student activists have become a target for Felix and his cohorts, placing Ron in a quandary: how to protect Patrice without blowing his cover?

BlacKkKlansman is a film of contrasts and Lee leaves the best and most powerful for the final act: Flip-as-Ron’s induction into the KKK with a post-ceremony screening of Griffith’s film included, with the oral history, delivered by screen and music legend and civil rights activist Harry Belafonte, of the 1916 lynching of Jesse Washington in Waco, Texas a year after the premiere of Griffith’s film. Lee cuts back and forth between the hooting and hollering at the screen from the white supremacists and their wives, and the shocked gasps and cries from the young African-American students at Belafonte’s graphic descriptions of the lynching and its aftermath.

Another contrast? That between the too full of himself David Duke as portrayed by Topher Grace with the real thing at the end of the movie. Just when you think Lee is about to leave you in a comfortable space, he pulls the rug from underneath you by having the present crash into the past with footage from last year’s violent Klan rally in Charlottesville, Virginia. As the master of Brechtian and agitprop cinema that he is, Lee hits you with a two-by-four in the film’s final minutes, forcing you to accept that nothing has changed and that, through inaction and conformity, we have left this disease to fester. It’s a bravura ending for a courageous film, one that asks you, well, what’cha gonna do about it? It is not only one of the best films of the year, it’s also one of the best in Spike’s illustrious and unpredictable filmography.