by Dana Castillo from WomenEmployed.org

I can’t recall in great detail the first couple of years after my mother and I immigrated to the United States from El Salvador, but from what little I do remember, the transition was anything but seamless. One of my most vivid memories is waking up in the middle of the night and the dread I felt when I realized my mother still wasn’t home.

My mother’s first job was working at a factory that produced and sold prepared food. Even though her shift was officially from 2:00 p.m. to 10:00 p.m., the reality was very different. When production ended faster than anticipated, my mother would get out as early as 5:00 p.m., meaning she’d miss five hours of pay—and what that really meant was that our family was missing out on money to pay groceries, bills, and rent.

But even though it meant losing money, I much preferred those days over the ones where production was slow and my mom would get out at 1:00 a.m. Because she’s visually impaired and can’t drive, my mom depended on my dad to pick her up on those days, which of course meant trying to find last-minute care (often unsuccessfully) for a then six-year-old me. Without ever knowing when her shift would end, my parents could never really plan for childcare—let alone a budget.

Almost 18 years later, I was reminded of this part of my childhood after reading a New York Times article about how the children of workers suffer when their parents have unstable and unpredictable schedules. And while I did feel a sickening sense of recognition when reading about how stressful home life can be for children who have parents with unstable scheduling, the price some children pay is far greater: a lack of exposure to high-quality child care facilities, poor language and problem-solving skills, inferior cognitive and behavioral outcomes.

Today, these exploitative work schedules are far more common than they were when my mother was working at the factory; in many industries, they’re the norm. In addition to low wages and zero to minimal benefits, today’s low-paid workers—many of whom work in service sectors like the retail and food industries—has the additional burden of not knowing when they’ll work or how many hours they’ll get from week to week. This practice, commonly referred to as unstable and unpredictable scheduling, leaves workers with exactly that: instability and unpredictability.

Nationwide, at least 17 percent of workers in the workforce experience unstable schedules, and the lowest-income workers experience the most irregularity. Women—particularly women of color—are the hardest hit by these practices, because they make up the majority of the low-paid workforce.

Of the nearly three million Latino families that have a female head of household, many work in low-paying jobs with unstable schedules. These are precisely the families that need stability the most. We should not expect struggling parents who are trying to earn a decent living—trying to put food on the table for their children—to wonder every week whether or not they will make enough to support their families simply because they don’t know how many hours their employer will give them that week.

Even more frustrating is knowing that it doesn’t have to be like this. Employers can give their workers more stable schedules without going under. Businesses that treat their workers well, such as Costco and QuikTrip, have shown that it’s possible to do well while doing good–a phrase coined by MIT Professor Zeynep Ton, whose wealth of research shows how employers can do right by their employees and still turn a profit.

My experience with unstable schedules had a profound impact on my childhood—so profound that I grew up to work for a Chicago-based advocacy organization that is fighting to put an end to unstable scheduling practices. It’s disappointing that years later, parents and children still have to pay the price for poorly designed business policies.  If we want healthy families, healthy communities, and healthy children, we need to invest in healthy workplace practices.

Dana Castillo is a Program Coordinator at Women Employed, a 43-year-old advocacy organization that mobilizes people and organizations to expand educational and employment opportunities for America’s working women. 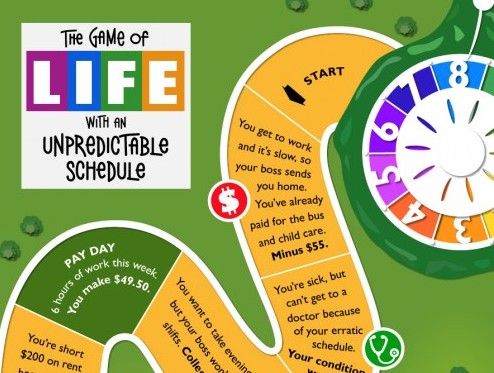