“EMISORA music video embodies the notion that your imagination can be your reality.”

Mississippi-born, Colombian-raised composer/singer/musician Daniel Guaqueta (GWAH-kettuh) debuts this premiere video for single single, “Emisora” in advance of his first solo EP Saying is Only Saying So Much, set for release on September 15, 2015.

The video is modeled after a Serge Gainsbourg video, and directed and edited by Philip Scarborough. EMISORA was filmed at a Mississippi film studio in anamorphic 4k, with a Panasonic GH4, on a $0 budget. The choreographer and dancers in the video are students from all over the country studying at Belhaven University school of dance in Jackson, MS.

‘Saying Is Only Saying So Much’ features five tracks written while he was traveling abroad (South America, Asia, Europe) and living in Mississippi and Colombia.  The EP was recorded in Mississippi to an analogue console and vintage tape machines with engineer Jonathan Clark, mixed by producer Loki Antiphony, and mastered at Welcome to 1997 Studios by Tommy Wiggins. Most notably, the EP features Mississippi’s emerging singer-MC AJC on tracks ‘We Were’ & ‘Saying Is Only Saying So Much,’ and New Orleans fusion-jazz guitarist Chris Alford on ‘Hot As Heat.’ The cover art was created by celebrated Mississippi artists Clay Hardwick and Josh Hailey. 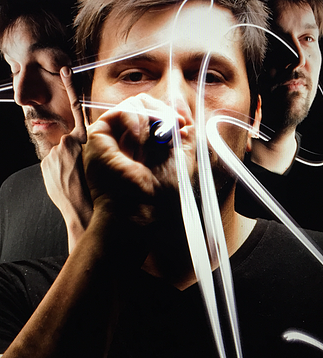 Daniel Guaqueta is widely known in Mississippi as the drummer for the instrumental bandQuestions in Dialect (Esperanza Plantation). Guaqueta refined his production skills in the studio writing, recording, and producing with various projects of many genres. Most notable recording sessions were with veteran engineers Bob Weston at Electrical Audio andAndy Baker at Chase Park Transduction. Guaqueta’s departure as a solo artist is a natural progression to explore the rhythms and melodies he’s been tinkering with in his personal studio for the last few years.

Guaqueta brings a combination of sounds to each composition, grazing the worlds of cumbia, electronica, pop, rock, avant-garde, and ambient. Where his urban travels have constructed his technical aptitude, his Colombian-Mississippi heritage provides a unique spirituality and sense of purpose to his music.