Attending a performance of The Nutcracker, people expect the usual pomp and circumstance that comes with the ballet: fancy costumes, perfect turns and foutes, next to zero dialogue or narration; solely a story through movement. I’ve seen the classics and expected another redo of the same tale. I was pleasantly surprised by the narration and play-like start to the ballet. There wasn’t a rush into dance numbers with the same smiley faces doing pirouettes until I get dizzy (I mean, the dancers get dizzy. I don’t get dizzy from just watching them…), there was an exposition that wasn’t left to a paragraph in the program.

The show begins with adults walking onstage speaking of the holidays and the party that is about to commence. The children that are part of the production all scurry about and are genuinely excited about Christmas. The sense of enthusiasm is palpable. Siblings Clara and Fritz (played by Julianne Kinasiewicz and Elliott Rogers, respectively) each try to peek through the keyhole of their bedroom door beyond their sight to a display of presents and decorations for the party. Their infectious energy brings back that feeling from my memories as a child: the impatience, the cheerfulness, the restlessness, the expectation of being on your best behavior but knowing full well that you’ll do whatever you want and no one can be too mad…. it’s Christmas! The production brings about a major bout of nostalgia.

Atop fuzzy feelings, there is plenty for the eyes to be drawn to. All the hustle and bustle of the young dancers and their adult counterparts was almost overwhelming. There were children in the corner playing a game and adults watching on adoringly, all of them anticipating Drosselmeyer (Randy Newsom), the beloved relative who always had fantastic gifts. The costumes are all vivid and detailed in their own way, from lace collars to earthy-colored bonnets. The cast ages range from what seem to be toddlers to elderly types. Not only that but this particular cast was the most diverse I have ever seen, diverse in race and in body type. Attending ballet, you expect to see plenty of white thin ballerinas and here you have dancers of all shapes, sizes, and shades gleefully participating in a party: this is a party that anyone can relate to.

Once Drosselmeyer appears, I am immediately drawn to his movements. Newsom’s Drosselmeyer captures the children and the audience with the flick of his wrists and grandiose arm gestures that precede his magic tricks. He doesn’t dance per se, he floats across stage. Literally everyone is happy to see him, he is the Gandalf of the production. I nearly forgot that Drosselmeyer isn’t the main attraction of The Nutcracker.

Drosselmeyer gifts the title toy to Clara who immediately falls in love. Fritz, in a fit of jealousy, steals the nutcracker away and ends up breaking it. The parents and guardians send the children to bed. However, Clara returns to her nutcracker as if to comfort the toy. Red lights flash on the backdrop and immediately, I sense that this is no longer taking place in Clara’s home. Mice appear to untie curtains and chase Clara right before the Nutcracker Prince (portrayed by Leonard Perez) comes to life. The mice themselves are unsightly but not grotesque or scary. Their costumes looked like they were stuffed with pillows. The mouse dancers move in such a campy, exaggerated way, reminiscent of puppets. The mice engage in a battle with the Nutcracker Prince and his soldiers. The soldiers are all child dancers and all the mice appear to be adults. Visually, the dance battle looks stunning with the wide movements and usage of high and low levels. Act One ends with the Nutcracker victorious and a gorgeous duet by the Snow Queen and Snow King (played by Meredith Ann Seeley and Ariel Cisneros respectively). 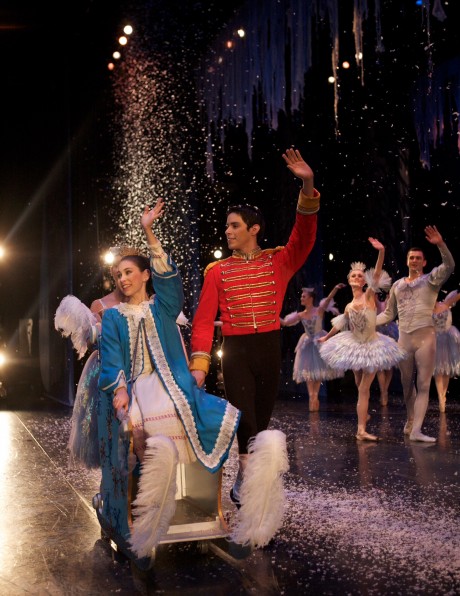 The duet is supernatural in performance and aesthetics. The costumes are so thin but reflective as snowflakes can be. Cisneros brings such strength to the role of the Snow King while Seeley looks like a royal ought to–completely effervescent and elegant. I am breathless watching them perform these epic moves and couldn’t help but wonder how many children in the audience will remember this show. Perhaps the children will talk about this as their first dance show and dream about performing akin to Seely and Cisneros.

The second act is more of what audiences expect at ballet performances: the favorite and familiar songs from the classic Tchaikovsky masterpiece with dancers executing the choreography brilliantly. The Sugar Plum Fairy and Cavalier dance performed by Jennifer Goodman and Randy Herrera is a highlight, with their duet and solos leading the audience into a loud, clapping frenzy. The Coffee Dance with its Arabian inspired theme drew me in with Jessie Guiterrez and Edson L. Cabrera performing dances as well as gymnastic feats. Alongside Guiterrez and Cabrera are Sophia Manrique, Casley Matthews, Sonya Spizer amd Elly Taylor, all acting out a coffee ceremony and accompanying the main dancers beautifully.

Sarah Schafer dances as the American Beauty Rose and her red tutu flutters as she leaps into her solo during another perennial favorite: The Waltz of the Flowers. She twirls around while the other flowers dressed in orange and more flowy skirts form an open triangle. The colors are warm and truly convey the imagery of flowers blowing in the wind.

The show, with its storybook beginning and expertly performed finale, truly impresses. Though The Nutcracker is a story that’s been told annually by Ruth Page Civic Ballet, this year Ruth Page makes the ballet accessible to people of all ages. Even if you’re not into dance, if you thought that Nutcracker movie with Macauley Culkin couldn’t be topped, or you’re used to classical ballet; Ruth Page’s version is worth the trek.