If you’ve been to Pilsen, (I hope) you’ve seen the murals telling their tales down 18th and 16th Street, on both sides of Racine, and randomly deep-rooted on the side of a building overlooking a lavanderia, covering someone’s home and even as a bright floral facade, estilo Oaxaca en dahlias, at a local beauty shop. Among all that visual goodness is also the magical restoration of the Aurelio Diaz mural (as part of Galeria del Barrio) created in 1976. It was completed by artist Sam Kirk.

Commissioned by the Chicago Public Art Group, Kirk and her team began that first mural as part of a project to bring more art into the community, while respecting original pieces. Commissioned by the same group again, she teamed up with fellow artist Sandra Antongiorgi and together they’re now producing a new, separate mural which is“a visual celebration of women, culture and identity.” Mira.

Apparently, the innovative artist feels she is not busy enough because she has also managed to work on an entirely separate exhibit that debuts tonight. 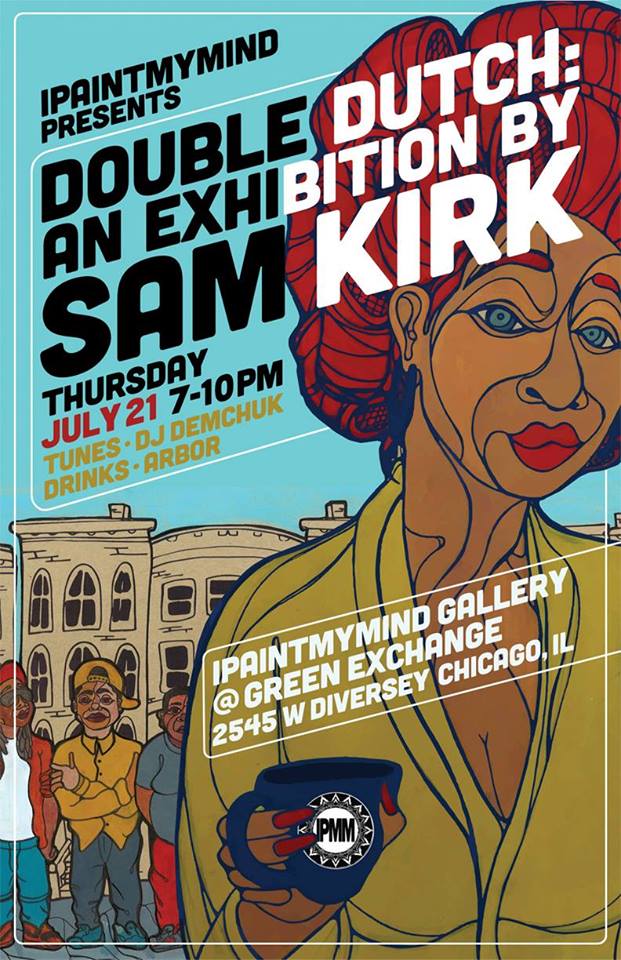 I Paint My Mind will host an opening reception with the artist on Thursday, from 7pm to 10pm.

The exhibition is free and open to the public.

“Through illustrations, paintings, and interactive artworks, Double Dutch provides a view into Kirk’s appreciation for the vast differences of two of the most dynamic cities in the U.S. Filled with experiences that include memories of cultural histories washed out by gentrification, the blooming of multicultural movements, and gratitude for the work done by the generations before us, Double Dutch shares her journey as she jumps between these cities exploring culture, identity, and love.”

I spoke to Kirk about her exhibit, growing up on Chicago’s South Side and what it means to be an artist in two cosmopolitan cities. Please note, this is part one, of this two-part interview series.

Kirk, of Mexican/PuertoRican/German/Irish descent, was born in Chicago in the early 80s, growing up on the city’s South side. “I grew up learning about our Latin cultures and our Latin heritage and being on the South Side I learned mostly about the Mexican side of my culture,” she says.

When, as an artist, she decided to embark on a cultural exploration (in all its facets) of New York in the summer of 2014 by self-funding her own residency, she soon began to realize that she didn’t know as much about herself as she originally thought. “Going to New York, a lot of people are mixed and a lot of people know so much about all their cultures. This was a huge realization.”

This realization (and that continued search about one’s self that seems to appear as if out of nowhere) challenged Kirk to continue going back and forth between Chicago and New York for two years. 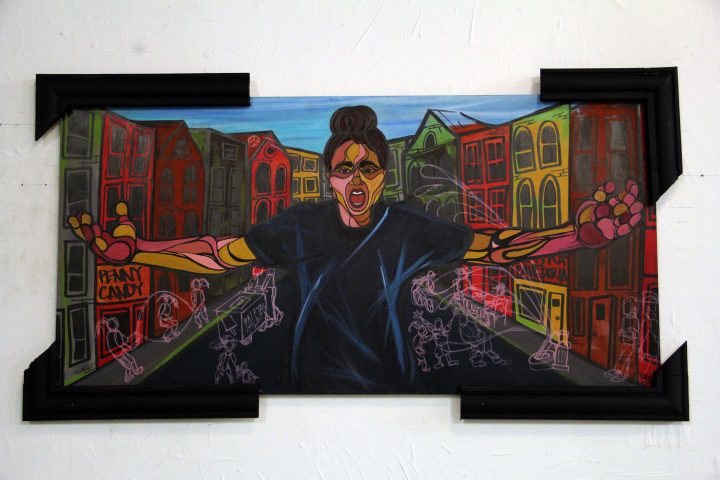 Why did you choose the name Double Dutch for this new exhibit?
I chose Double Dutch because that feeling of jumping between two cities was most similar to playing that game. I played double dutch when I was younger and it’s kind of the idea of having one foot on the ground while the other one is up in the air. This exhibit is all about going back and forth between two cities to figure out a lot, a lot, out.

When and why did you decide to embark on this venture?
It was in June of 2014. I had been going to New York for over a decade, at least four or five times a year. There was a constant draw every time I got there and it felt a lot like home to me, which is strange because it never was home, but, I just felt very comfortable there. And, my girlfriend lived in Brooklyn and we had been dating long distance so it was a combo of an itch that I had had for a long time and also love.

How did you fund your residency?
I worked in corporate America for about 10 years, in advertising, and before I quit my job to do art full-time I saved money. Basically, I used that savings to invest in myself. I hadn’t really applied to a lot of residencies and I kind of got impatient. I knew that this was something I wanted to do so I used some of my savings, opened a new studio in Brooklyn, bought a second set of equipment that I would need out there and basically set myself up to work in both cities. 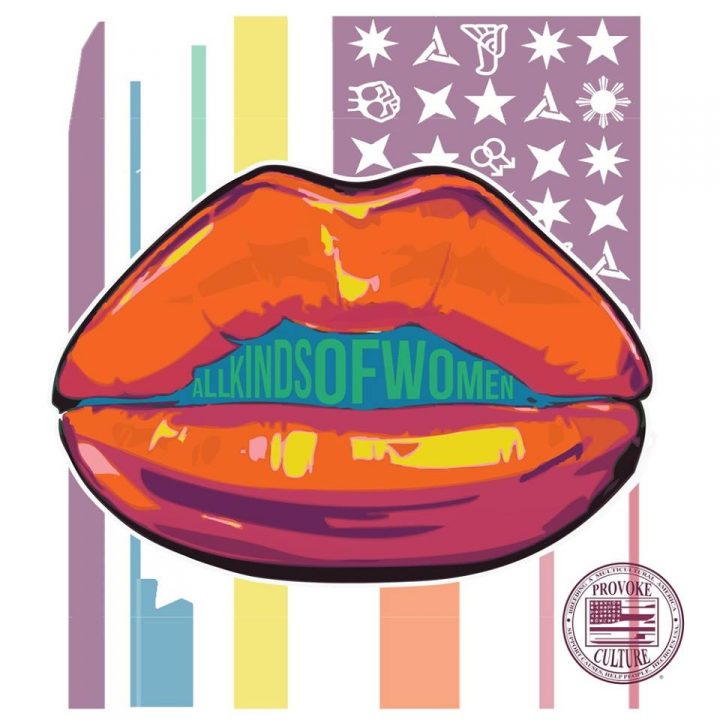 I’m sure it hasn’t been easy (speaking from personal experience, ehem) so what kept you motivated during that time?
There were a lot of times that I felt that I wanted to give up and I think it’s just because New York is a very aggressive city and moving to a city like that, at 32, when I’m kind of set in certain ways, and not as flexible as I was in my 20s, there was definitely a lot of frustration which would lead me to feel like giving up. But, being there, an unexpected thing began to happen.

So I went out there thinking that I’m going to explore cultures and study multiculturalism. And as you know, almost every city in the US is segregated, including New York but it’s a very different version than in Chicago. Even though it exists, New York has more of an international feel and you’re able to experience diversity on a regular basis. So I went out there thinking ‘I’m gonna explore all these different cultures and create all this work,’ and for the whole first year it ended up being a big reality check for me because I started to realize all of these personal things about myself that I was struggling with that I didn’t realize I was struggling with.

I started to realize things like even though I’m out with my queer identity I’m actually not confident in that part of me. I don’t even know that I look like what I want to look like. And, on top of that, I’m mixed and growing up in Chicago, on the South Side, I learned mostly about my Mexican culture. So that whole first year became this awakening for me and realizing what my culture is actually about, figuring out who I actually am,  and what I appreciate about my life thus far, and where I want it to go and feel like. It was definitely difficult.

Plus, I’m really close to my family so going back and forth and being separated for weeks at a time and juggling trying to have an art career in New York was very difficult. It was a lot of long hours, anxiety – extreme anxiety – so there was a lot of personal and emotional things I had to go through in the first year until I finally got into some sort of a groove. 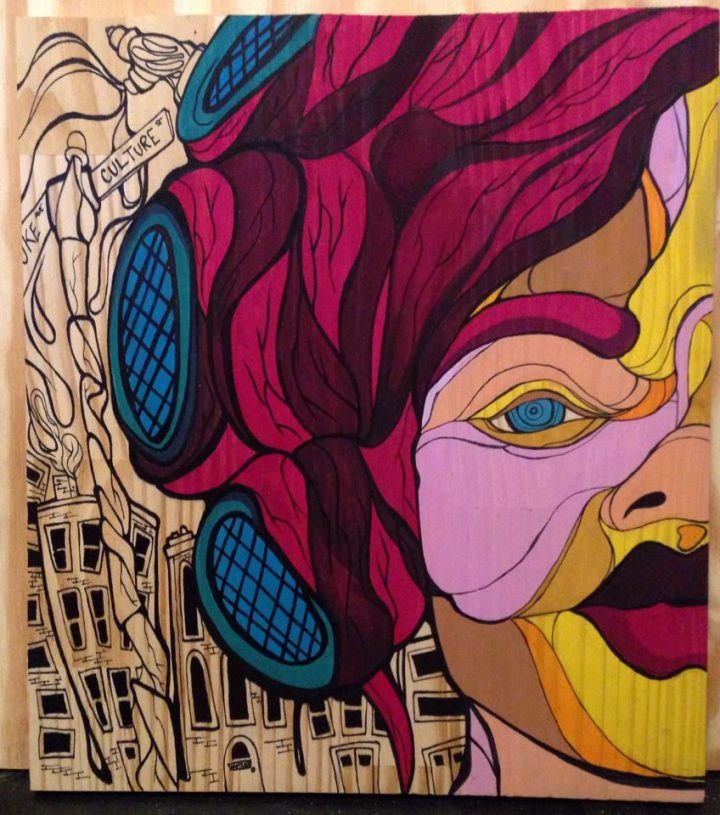 Have you lost that groove since you’ve been back in Chicago?
I have, a little bit. For now I’m going through this whole different learning of myself and part of that is not going backwards to where I was before I left two years ago… which is interesting because it feels like it’s kind of about comfort. In New York there was this constant curiosity guiding me – whether to know more about other people, or myself, but the curiosity was constant. Being back here, though, I find myself having to search a little bit deeper than I had when I was in New York to find the content that was so often just on the surface.

And I find myself really thinking a lot more about my work instead of just pumping through it and creating pieces everyday like clock work, like nothing. I think some of that has a lot to do with the amount of time I have here. I have a lot more time to think about the things I have to work on, which includes asking, ‘how am I going to show this work and how am I going talk about it.’ That’s what I’m figuring out. A lot of it is raw because I’m going through this process as I create it.

Wait, really?!
Oh yeah, without a doubt! Well, 1. Chicago has a smaller art industry. 2. A good majority of the art industry is not focused on people of color. I feel that the kind of contemporary work that I do, which is often political and talks about contemporary issues, is not seen as contemporary art in Chicago. So trying to get my work shown in bigger spaces and for different audiences than the ones I’ve already reached is much more challenging. In NY there are so many galleries and there is so much diversity and different sections of their city that have their art focused. They’re also a lot more open to listening to the artist and how they express their work. They are simply just more open to an innovative way of showing art instead of being super traditional.

This brings to mind a recent article by fellow journalist, Bianca Betancourt, where she speaks to another Chicago artist, Runsy. In what I consider a stellar opening paragraph, Betancourt writes, “Chicago’s art scene, like its neighborhoods, tends to be segregated. Artists and aficionados usually partake in shows and galleries that are within the bubbles of their own enclaves, and seldom experience anything outside of them. Whether it’s on the city’s West or South sides, Chicago’s Latino art scene is notorious for this, and understandably so—if Latinos don’t support their own hoods, who will? But while these art shows and events from neighborhood to neighborhood are a great cultural hub for communities to come together, eventually the Frida Kahlo-inspired spring show concept tires out year after year. What about the Mexicana creative who’s really trying to make it—and not by solely banking on producing prints and trinkets of Mexican folklore?”

Stay tuned to part two of my interview with Sam Kirk to learn about her answers, and all the other awesome things you may not have known about one Chicago’s own.