You know that summer in Chicago means cramming as much outdoor fun as possible because once winter hits, well, I’m not gonna lie… it doesn’t really matter ‘cause we still go out. (We’re tough out here in the Midwest. Nothing stops us from having a good time, amiright?) But, these outdoor activities won’t be around for much longer so we must take advantage and August in Chicago means it’s time for the annual Villapalooza! music and arts festival. This year it’s taking place on August 27 in Little Village but before that happens, there’s a little shindig I want to talk to you about. It’s the kick-off party for the festival and that is happening tomorrow! Tickets available here. 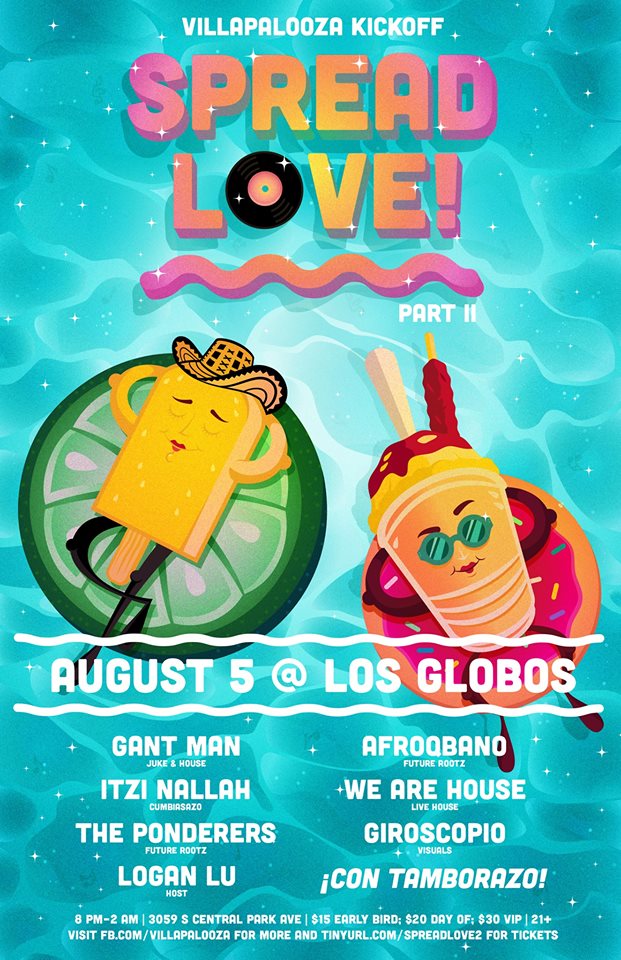 If you didn’t already know, Villapalooza began in 2011 and is dedicated to promoting non-violent spaces for arts, culture and community engagement. The all-day, all-ages event is free and it combines local and international musicians. It is one of our favorite festivals because of its diversity and DIY efforts and empowering attitude. It’s on point, y’all.

How did you end up at Los Globos for the fundraiser?
We always try and keep things local. The partnership with Los Globos was actually built on an existing relationship they had with one of the festival organizers, Vanessa Sanchez of Yollocalli, the youth arts initiative of the National Museum of Mexican Art, had arranged to have local youth paint a mural on the wall outside Los Globos earlier this summer. The owner had already been supporting Vanessa and the Yollocalli youth mural project and when we reached out to him about potentially partnering on an event with Villapalooza he was more than willing to let us use his space in an effort to support our initiatives in the community.

When will you announce headliners for main event?
We kick off with the fundraiser this Friday and proceed to go into full festival mode immediately after. Stay tuned to our social media on Monday for some major news. 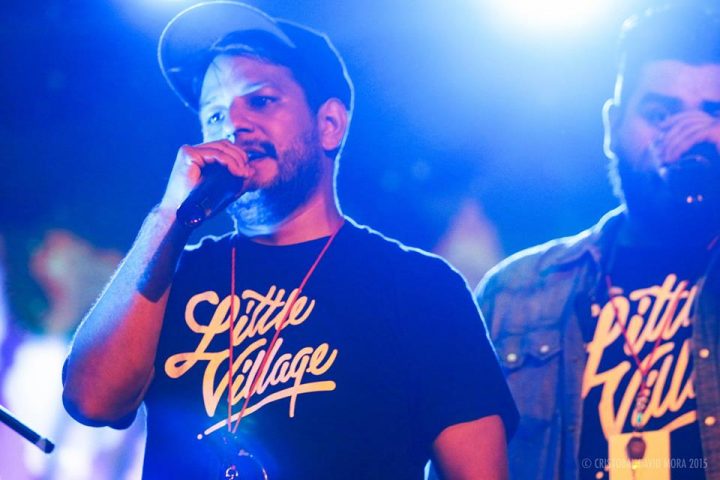 Is it becoming easier or more difficult to organize the festival, especially since it seems to be getting bigger?
Organizing the festival is always a challenge, especially since each of the organizers is a volunteer and has responsibilities outside of the festival. Every year we learn a bit more in an effort to grow and build a better festival the following year. It’s precisely because we want to give people something new, refreshing, and exciting every year, that we never really get a chance to get too comfortable. That said, regardless of how hard things may get, given that we all do this out of love for our people and La Villita every time we see people’s smiles and families dancing it reminds us of why the effort is worth it.

What’s your favorite part of the whole thing?
Easy! The people. It’s been an incredible journey watching the festival grow over the last six years and our favorite thing about it year after year is seeing the joy that it brings people. Our communities are faced with a lot on a daily basis and to see such a diverse group of people come together in peace and love, even if only for a day, is a feeling like no other. Punks, hip hop heads, house fans, cumbieros, brothers, sisters, and abuelitas all dancing alongside one another on the same street under the moonlight on the southside of Chicago? What in the world is better? ¡Nada!

More about the kick-off party at Los Globos:

Join us on Friday, August 5 for an evening full of great music as we prepare to kick off the sixth annual Villapalooza: Little Village Music Festival (Saturday, August 27, 2016).

Over the past six years Villapalooza programming and outreach efforts have reached over 26,000 youth and families in Little Village and across the city. This has all been made possible through the generosity of people like you. We need your continued support as we work together to ensure that the sixth annual Villapalooza reaches even more.

Come dance the night away for a good cause alongside some truly special musicians to the sounds of cumbia, tamborazo, house, global bass, and just about everything in between.
100% of ticket proceeds will go toward improving Villapalooza, securing safe spaces for arts engagement in Little Village, and keeping the festival completely free.

Come early, stay late and help us spread the love! 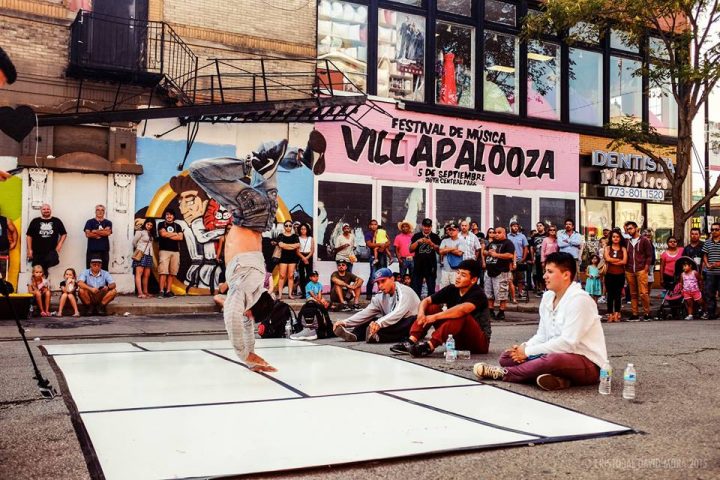 A select number of VIP tickets will be made available for those looking to make an additional contribution. VIP ticket holders will be able to cruise in style to the event in a Hummer limo courtesy of Gold Coast Limousine. The limo will feature complimentary drinks inside and over the course of two hours will take guests to a stop in Little Village, Pilsen, and down town for complimentary shots at three select bars. The limo will pick up guests at Los Globos at 8:30 pm and return them to Los Globos by 10:30 pm to enjoy the party. VIP Ticket includes admission into the event.

A silent auction will be taking place during the event with packages that include Chicago Cubs game tickets, a taquiza for you and 50 of your friends, among others.

Local arts and goods by: 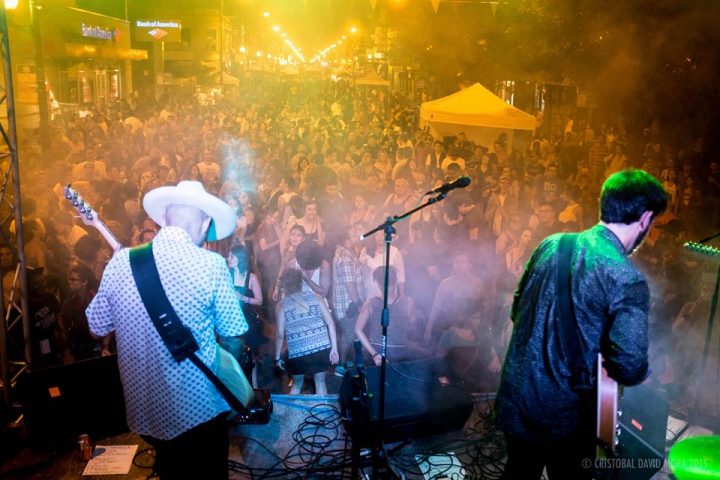 DJ GANT MAN aka General Juke, widely acknowledged as one of the main key innovators of Ghetto House/Juke and a Chicago Juke master, has been mixing since the age of 10. Since the 90s, Gant Man’s unique sound has taken him through the rave and club circuits of Chicago, the U.S., and Europe. In 2005 Gant was the assistant producer with Grammy Award winning remixer Maurice Joshua on R&B group Destiny’s Child remixes which landed him his breakthrough remix in 2005. This made Gant the first Juke House producer to have a Juke remix on a major label with a major artist with his official remix of Beyonce’s “Check On It” feat. Slim Thug on Sony/Columbia Records. Most recently, Gant performed as a guest along side Green Velvet at North Coast Music Festival doing his “Percolator” remix. His track, “Juke Dat Girl” is featured in the latest Tyler Perry’s movie “Peeples” released in May of 2013. Gant also performed at Electric Daisy Carnival during it’s debut in the Chicagoland area in May of 2013. Gant Man joins Villapalooza for the first time ever on August 5th for Spread Love Pt. II.

A member of Sonic Diaspora and People’s DJ Collective, Afroqbano is originally from Cuba and now living in Chicago. In Habana, he worked as a regular DJ for a number of underground house and Hip Hop clubs and produced and toured with some of the most well-known artists and ensembles in Cuba. Since moving to the United States, Afroqbano has continually expanded on his style & influence, developed his acumen as a producer/remixer, and shared stages with luminaries like Mos Def, Pete Rock, Hypnotic Brass Ensemble, Rich Medina, and La Santa Cecilia. While the Afro-Cuban and Latin rhythms of his culture are central to his sound, he embraces and merges a wide range of global & soulful music. Most recently, AfroQbano was the runner-up in the Chicago Reader’s 2016 poll of Best Chicago DJ.

ITZI NALLAH is the resident DJ and faithful organizer of CumbiaSazo, Chicago’s largest and one of the US’ most expansive cumbia + global bass parties. Having also worked with FEX, Sonic Diaspora and Peoples DJs Collective, his cultural projects focus on community-building, global roots & bass music, and liberation-minded dance floors. A recent tour with CumbiaSazo saw Itzi Nallah work dance floors throughout the midwest, southwest & west coast while current residencies in Chicago include the infamous Double Door and Harbee in Pilsen (for Alegría). Show highlights include sharing stages with acts ranging from Ozomatli, Rich Medina, Nickodemus and A Tribe Called Red to Pete Rock, Javier Estrada, El Dusty and Haitus Kaiyote.

Formed in 2012 by by Leonardo Prado, Julian Jeronimo, Ivan Delgado, and Ricardo Contreras, You Are Here is Chicago band of alternative rockers that most recently performed alongside other greats at Ruido Fest. For one night only, the band members, which describe themselves as “just four guys making nose,” will be shape-shifting into WE ARE HOUSE and performing live house music.

The Ponderers is formed by Sandra Trevino of Enchufate and Stephanie Manriquez from Revista Contratiempo and FMEL, both Chicago-based journalists. The music enthusiasts play a large volume of female-fronted music with a focus on women empowerment. They’ve also curated a digital source of articles and interviews featuring their favorite female artists which you can find at gozamos.com/theponderers

The Ponderers feature global tracks, with a focus on Latin America, spinning eclectic sounds created by the world’s fiercest chicas poderosas in both digital and vinyl formats. During their show you can also expect guest DJs, interviews and the freshest cuts in Latin alternative music.
(via Lumpenradio)

GIROSCOPIO is visual DJ Charly Garcia, one half of the duo Sonorama, a Chicago-based DJ collective that is known for energizing dance floors and sound waves with a unique blend of vintage Latin sounds. Founded in 2010 by Charly Garcia and brothers Edgar and Marlowe Baca, Sonorama is a group of insatiable diggers and lovers of mus­ic on vinyl. In early 2015 the trio launched the debut of Sonorama Discos, marking their interest in seeking and releasing contemporary bands and music with similar leanings to Latin America’s sonic past and an ear for fresh approaches to that tradition. When the guys aren’t busy DJing an event, you can catch their selections via podcasts, the occasional playlist or you might just run into them at your local record store.

Luis Tubens, aka LOGAN LU is a Chicago born Puerto Rican poet. His narrative poems depict the gritty ambiance of the inner-cityscape while describing reflective personal experiences. He draws inspiration from the urban realities of the developing Latino diaspora and from his observations of proletarian struggles. His interactive style and hyper performance invite the crowd to be active participants in his performance. Most recently, Logan Lu has collaborated with musicians and bands including ¡ESSO Afrojam Funkbeat!, Villapalooza, and CumbiaSazo.

▼…and a special tamborazo guest! ▼

▼ABOUT VILLAPALOOZA▼
Villapalooza is a free, all-day, all-ages music festival dedicated to promoting non-violent spaces for arts, culture, and community engagement. The festival will be taking on Saturday, August 27, 2016.