Many travelers are familiar with the wineries in Napa Valley, but if they head north they will discover a Wine Road that has much to offer without all of the busloads of tourists.

From Chicago, flying into San Francisco was a breeze. Then it’s a quick jaunt up Highway 101 over the Golden Gate Bridge to arrive at the Bella Villa Messina to spend the night. Not your typical bed and breakfast place, it’s like staying in a huge mansion with gay partners Jerry and Harold. They treat everyone like family, and the cooking is top notch. I can still taste the dry-cured bacon and the Hawaiian King Bread french toast, the breakfast melange of aromas wafting up through the house in what owner and chef, Jerry Messina, calls “the chimney effect.” The fireplace in the room kept me warm and toasty along with a Jacuzzi tub to relax after a long trip.

I began the week with checking out some local winemakers at their factories.

Manzanita Creek Winery is owned by two brothers, Jack and William Salerno. Having very different personalities adds to the mix with this nascent production having started only a few years ago. Try the Stealth Zinfandel. It was inspired by planes, of course, and comes in for a strong landing.

The well-known film director Francis Ford Coppola has a side project that has grown into a huge business: Francis Ford Coppola Winery. Located in the Alexander Valley, Coppola’s winery is massive, complete with a pool, restaurant and factory that produces huge vats of wine. The style of food at the inclusive restaurant RUSTIC brings the diner to Italy and “Francis’s Favorites” with such dishes as Mrs. Scorsese’s Lemon Chicken and the Marrakesh Lamb. His Oscars are displayed for public enjoyment, and artwork is everywhere, even down to the label on the reserve wine. 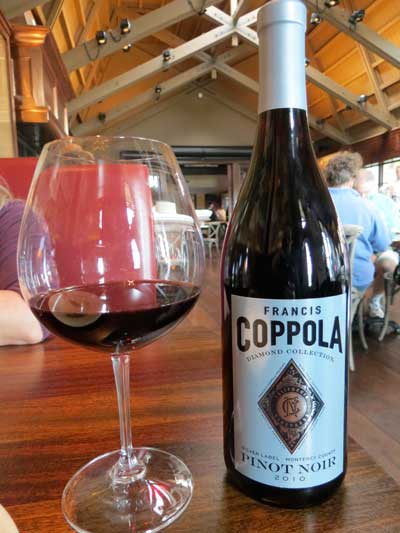 Running out to greet us were two terriers at the Nalle Winery. Built underneath the ground in a shallow cave, this family-owned winery is a cool place to be, both literally and figuratively. Don’t worry — you won’t feel claustrophobic. There is only three feet of dirt covering the facility, with rosemary growing above the construct.

Don’t miss the breathtaking view from the Russian Hill Estate. Edward Gomez, a retired doctor, made his dreams come to fruition by creating a place to drink and reflect. Chef Mateo Granados prepared a delicious meal including his specialty: the Monkey Face Eel that is custom-made for different size groups. Inspired by his Yucatan background, Mateo uses local Sonoma ingredients to prepare sustainable dishes such as the cochinita pibil and the pollo adobado.

The Wine Road includes six of Sonoma’s County’s appellations. Tasters follow a map and rules to enjoy a one-of-a-kind experience that leaves other samplings in the dust.

Barrel tastings offer buyers a chance to purchase futures, which means wine that is in the finishing process, usually completed by August of the same year. This is for bargain shoppers offering an opportunity to order in bulk and save big bucks.

“Crazy Coffaro Futures Program” has come up with a system to purchase that premium wine and is currently on their second sparkling wine. David Coffaro invites guests for tastings
everyday except holidays.

The Pedroncelli family have an upscale winery with a fourth generation now growing on the vine.
In downtown Geyserville, there are many stops to stroll to such as Route 128 Winery where you can buy moisturizer made from grapes! While the outside might not impress, just look inside for a hands down winner as Charles and Molly Meeker have garnered awards like finding a place in  Wine Spectator’s “100 Best Wines of the World.” Transformed from an old bank property, the Meeker tasting room is literally an old bank vault full of bottles that I would like to be locked inside of for an afternoon. Mercury Wines brings something creative to the table with one known as “The Bastard” and another known simply as “Orange.”

Lunch at Jimtown Store takes customers back in time with antiques in every corner of the general store and sandwiches and entrees good enough to be featured on Diners, Drive-Ins and Dives.

Speaking of restaurants, Starlite Vineyards supplies many of their wines all over the world including Chicago at venues such as Blackbird and Pops for Champagne. Their incredible art collection relaxed spectators who sipped on Cabernet Sauvignon while sitting in the sun.

Think about joining a wine club to really rake in the deals and expand your knowledge. Sunce Winery has a record number of members and has won medal after medal. Hopping from barrel to barrel, this winery has garnered well-deserved accolades and has a nice sense of style.

For dinner, don’t forget to stop by the new and hip Scopa in the downtown square of Healdsburg for Nonna’s Tomato-braised Chicken served in a warm pot. The place keeps a cute crowd that packs the house and look for an open kitchen to watch pizza dough be kneaded by strong hands.

The road continued on through even more wineries with more than 100 to sample from over the weekend.

Make sure you are there next year in March as the tour celebrates a big 35th anniversary. Visit www.wineroad.com for tickets and details such as a map to not get lost. There’s an app for that too. Look for the 14th Annual Wine & Food Affair Nov. 3 and 4 this winter.

All this wine talk is making me thirsty. Time to uncork a bottle. Cheers!