You’ve always secretly wanted to sing karaoke, and tonight you’ve made your obsession known. A friend has accepted your invitation to the Hidden Cove karaoke bar on North Lincoln Avenue in Lincoln Square, about which you’ve heard a couple positive rumblings. It’s 11:07 at night and the street is quiet. You pull up and park across from the building, whose façade seems mildly intriguing in its ordinariness. Neon lights in the window and a somewhat dirty sign reading “The Hidden Cove Lounge” nestled underneath a palm tree inform you that you have indeed come to the right place. Below that sign you find these thrilling words: “KAR AO  K  E   EV E RYN   TE   10P   M.” Your eyes stumble over the letters, just holding their balance firmly enough to leap across the treacherous gaps of varying distance.

You enter the bar and are immediately struck by its vacancy. You’ve come on a Wednesday, and, because it’s not the weekend, it was highly unlikely that there would be more than five other people here apart from the bartender (an elfish, Eastern European girl) and the bouncer (a stout man with a giant birthmark covering half his face). Tonight there is only one—one lonely soul seated at the bar with absolutely no interest in singing karaoke. He doesn’t lift his head as you enter but simply goes on caressing his drink and staring longingly at the bar. With a tinge of nostalgia and sadness in his voice, he mumbles something incoherent about “Macho Man” Randy Savage’s indelible contribution to professional wrestling. You and your friend collect your beverages and one of the thick, torn apart binders containing the collection of karaoke songs and take a seat at a small, round table.

You open the binder and a rainbow shoots out. You’ve unearthed a treasure chest, a seemingly limitless list of options, both ironic and earnest, for singing your heart out. “Seemingly” because, as you flip through the book, it soon becomes apparent that most of the songs are listed at least twice and in some cases three times across three separate sections. Nevertheless, the number of choices is generous. The first and third sections are neatly sorted by artist name and song title respectively. The middle section, however, is a jungle—an unorganized mess of various lists, including Party Tyme, Greatest Hits 1998 and The Who, and another fifteen or so pages with no identification apart from a number and a song title. Most of the pages in this unsorted portion merely feature the same songs but in a different order. Even so, you meticulously scour each page for that one hit that slipped through the cracks. You get the regretful feeling that, even if the dream song were somewhere in here, you would never find it.

One specialized list in particular catches your eye: Dangerous So Hot It Bruns.

“Ah!” you exclaim as you retract your scorched hand from the page. While you nurse your wound, contemplating why a “brun” is so much more intense than a regular burn, your friend seriously considers igniting a heat wave with one of the songs listed. 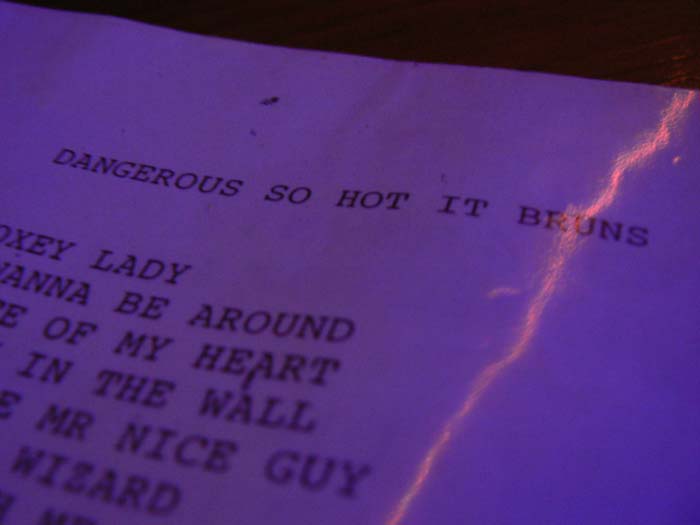 She decides to play it safe with the 1994 pop hit “Insensitive” by Jann Arden. Or at least she thinks she’s playing it safe. The bartender enters your friend’s selection into the magical karaoke machine behind the bar. She takes the stage, and, with the first note of the song, the mood of the night abruptly changes.

An LED light show projected from the ceiling dances across the floor, spinning and twirling across her legs and hair. The room becomes drenched in damp synthesizer and prismatic light, and time slows to a hazy crawl. You begin to develop tunnel vision and can see nothing but your friend, all alone against the wall, heels together, one big toe resting shyly upon the other, gripping the microphone like a dove in her two hands as she squeaks the lyrics. You catch your tears in your throat. You had always known these feelings for her were percolating beneath the surface, and tonight, in a seedy dive bar located between the Summit Motel and the end of everything, they finally burst forth in a song that means there’s no going back.

Between verses she looks over at your table and smiles. You try to maintain your poise and smile back as you continue to silently reflect upon Ms. Arden’s words as sung by a girl entirely unaware of their relevance:

How do you numb your skin after the warmest touch?

How do you slow your blood after the body rush?

How do you free your soul after you’ve found a friend?

How do you teach your heart it’s a crime to fall in love again?
“I’m not sure I want to know,” you think to yourself.

“Insensitive” is one of the select songs at the Hidden Cove that features an accompanying music video, and you watch it play on the monitor alongside the lyrics. It tells the timeless story of a pizza delivery boy with a special order, concluding in a heroic motorcycle getaway. Were you in a clear state of mind, the video would be campy and hilarious, but tonight it seems to capture your feelings perfectly.

The music becomes softer in your mind and you drift elsewhere. You think about your childhood and what it would be like if the world ended tonight. You wonder whether anyone has ever seen her the way you see her now and whether you will ever see her this way again. You quickly scan the bar to discover that no one is paying the slightest attention; you alone recognize the momentousness of what is now happening. You immediately immortalize it in your memory, imagining that you are looking back on this moment from some eternal point in the future when all the noise and the static has faded and you are finally able to hear nothing but the beat of your own heart.

You vaguely see your friend walking back to the table, and, realizing her song has ended, you shake yourself.

“That was awful,” she says nervously, placing her fingernail against her lateral incisor.

“No, it was nice,” you assure her, wondering why you’ve never kissed that lateral incisor and pledging to yourself, perhaps in vain, not to go home until you have.

The bartender calls out your name; your song is up. You timidly move from the safety of the bar stool out into the wide open of the rainbow-lit stage. You look at each of the four television monitors hanging from the ceiling around you, wondering which one you should read from. The one that forces you to face away from her, you decide. You look across to the man at the bar, then briefly over to your friend, then down at the cosmic floor. A whirling neon green saucer collides with a shaft of flashing red before shattering in a silver-speckled stardust smeared across the surface of your waking dream. A jet stream of anticipation passes under and through you, lifting your heart into your voice. The music starts. You take the microphone in your unsteady hand.

One thought on “So Hot It Bruns: A Night at the Hidden Cove”