For a Chicagoan, summer doesn’t begin on June 21 first as the calendar would have you believe. Summer starts when Mother Nature stops PMSing and the temperature consistently rises. That’s when it’s time to abandon the wariness of May and blast through June, hoping that, with right amount of verve and intoxicants, you’ll be maxing out by the Fourth of July. From then on you simply need to maintain till at least Labor Day weekend, maybe even Halloween.

And there is no greater checkpoint, no better test to make sure you’re in top gear for the summer, than the Spring Awakening Music Festival at Soldier Field. Like a shot of adrenaline to the heart, Spring Awakening does as advertised, luring the city out of its hibernation to shake off the frigid laziness imposed by yet another icy winter.

Of course, most people aren’t into the EDM scene. To them the music sounds like some kind of robotic orgy, overflowing with piercing lasers, rattling bass and a thousand other noises that evade description. Then there’s the crowd, a jumble of America’s tuned out youth: crews of club boys strutting around in graphic tank tees, coquettish floozies taking selfies in cut-up jeans that expose their underbutt, the clean-cut suburbanites engaged in metered pandemonium. These are reasons enough for most Chicagoans to find something else to do on a June weekend, and I get it. I felt the same way too once… in the beginning.

But there are at least three features of this year’s Spring Awakening festival that nearly anyone can appreciate.

First there’s the relief that this year’s festival is only 18 and over. Anyone who has been to one of the day care centers masquerading as a music festival understands how difficult it can be to get rachet next to a group of anklebiters hoping to score a pack of squares and a handle of anything later that night. I think we can all agree that kids are annoying, and no one wants the exhilaration of booming music and blinding lights to be shattered by the ear-splitting squeals of pubescent nitwits reeking of Hot Pockets and Capri Sun.

Second: Silent Disco. I regret only catching the tail end of it last year. Having heard they were all the rage in Paris, where noise ordinance place heavy restrictions on traditional clubs, I must admit it was a little disturbing to see how creepy it seems, at least to the passerby: a cluster of friends and strangers quietly undulating to the sound of zilch. But when my friends and I decided to try the headphones on for ourselves, we discovered that the music at Silent Disco was arguably the best of the entire festival.

Last, but certainly not least, there’s the incredible lineup: Jack Ü (Skrillex and Diplo), Martin Garrix, Afrojack, Tommy Trash, HeadHunterz and Chicago’s own Flosstradamus. To accommodate the more than 70 artists scheduled to perform, Spring Awakening 2015 has expanded to a fourth stage under the colonnades facing the lake. Plus they offer an iPhone app to help you coordinate your own bacchanal. 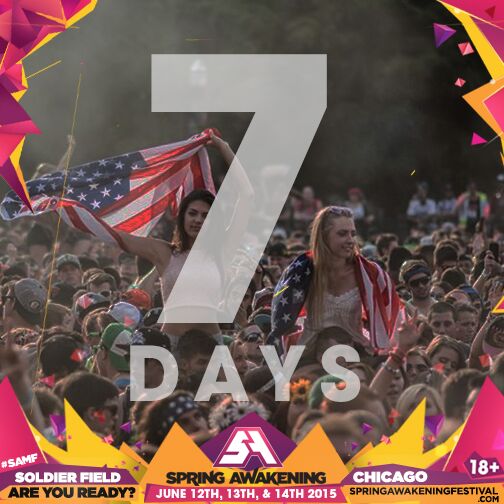 Spring Awakening is only seven days away, so what the heck are you waiting for? Buy your tickets now — while you can still afford them.

See you on the other side!