“You can’t touch music, but music can touch you,” is what I would tell myself when listening for hours to my favorite tracks. I had a playlist for every situation, whether I was washing dishes, taking a shower or playing video games, there was never a dull moment. Music can be an escape, or gateway to another world, capable of changing your emotions. So, try to imagine all the feelings I was going through when I heard that one of my favorite rock bands, The Dead Milkmen, were coming to my city to play at House of Vans. 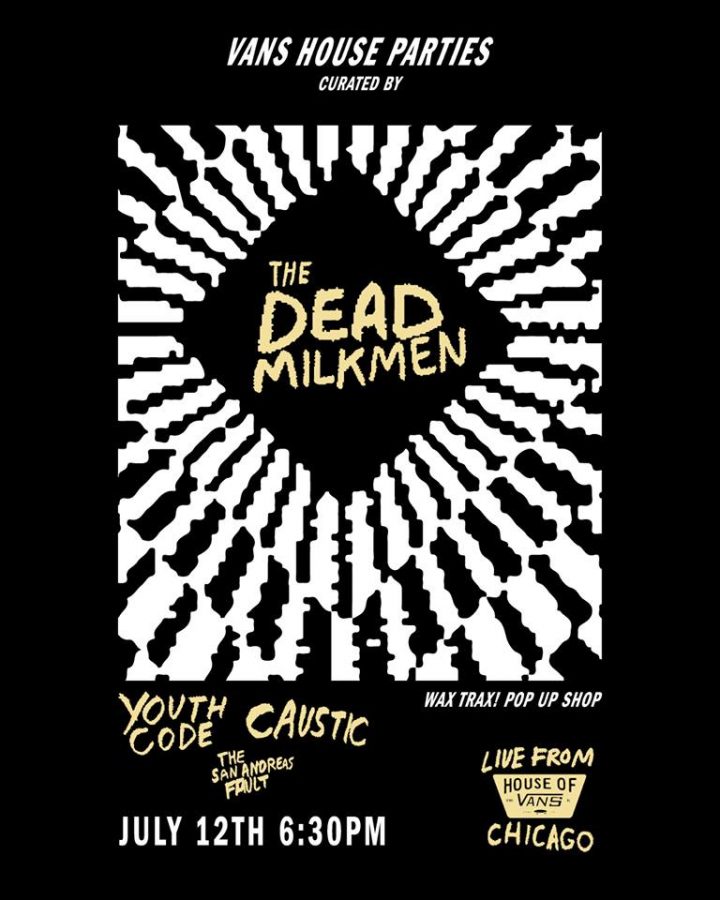 The Dead Milkmen, for those who don’t know, are an American punk rock band that formed in 1983. Their most popular song is Punk Rock Girl released on their 1988 album, Beelzebubba. Despite some complications with their label, Hollywood Records, and their consequent split in 1995, after a 13 year hiatus they reunited in 2008.

With a new bass player in the band, Dan Stevens, they released The King in Yellow in 2011. It was their first studio album in more than a dozen years.

Once I heard they would be at House of Vans, I didn’t miss my opportunity to see them live, for my very first time. I’m glad it was at the House of Vans because I’m familiar with the joint, its vibrant music and laid-back atmosphere. The venue has an indoor skate park, making it feel like the perfect hangout, like the clubhouse of my dreams. Additionally, as though the event couldn’t get any better, Jay Howell – the character designer of Bob’s Burgers and Sanjay and Craig – was DJing.

I was blown away when the music started playing and I mean quite literally, I could feel my entire body vibrating. Then, as if in sync, everybody around me moved to the beat and the rhythm and I was unable to keep my composure. I began to sway in motion, as not to stick out of the crowd, losing myself to the music, working up a sweat and yet I couldn’t stop. I was lost in marvelous symphony as I felt myself slowly fading out of body.

At that moment, as though a form of auditory therapy, all anxiety and strain seeped out and with it brought a state of nirvana. The opening acts were amazing featuring appearances from Youth Code, Caustic and The San Andreas Fault. I couldn’t help but sing along to songs like Encantada and Outpost.

Before I knew it The Dead Milkmen were on stage and setting the crowd ablaze and I could feel the space around me change drastically as they were setting up. I was excited and without a second thought rushed to the front before they started to play. My heart was ready to pound out of my chest as the very sight of them shook me so intensely.

Finally, they opened with Battery Powered Rat then transitioned to Punk Rock Girl wrapping up with their encore Two Feet Off the Ground. The set felt as if it has lasted only a few minutes, as I religiously sang along, but in reality went on for well over an hour. I could say I enjoyed their music, but that would be a massive understatement. In reality I wanted to jump on the stage and shout!

Once the show was done, I stood there in awe because The Dead Milkmen are an extremely talented group. They stand out immensely and I definitely recommend checking them out. I also recommend the House of Vans because they always host gnarly events and concerts.

Oscar Perez is a young reporter from Little Village and a student of English Literature and Humanities at Northeastern Illinois University. He is currently part of Yollocalli’s radio and journalism program,“Your Story, Your Way!”