Have you ever tasted a rellerindo? 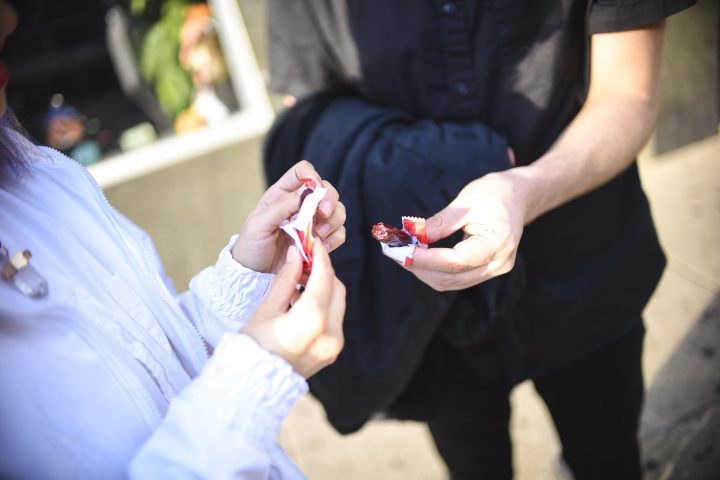 If you haven’t, a rellerindo is a tamarind candy with a soft filling – and an extra delicious Mexican treat that Rafael Marfil and Pammela Rojas were craving. They were surprised to find it at Pilsen dulcería Lupita’s, which is located next to the 18th Street Pink Line station where they arrived just in time for our photo session around the neighborhood. It was 4:30 p.m. and we were planning to delight Shiro Schwarz with a taste of murals and Chicago’s Mexican culture in a two-hour walk that brought up many conversations on a range of topics from tacos, churros and history to music, festivals and cats. 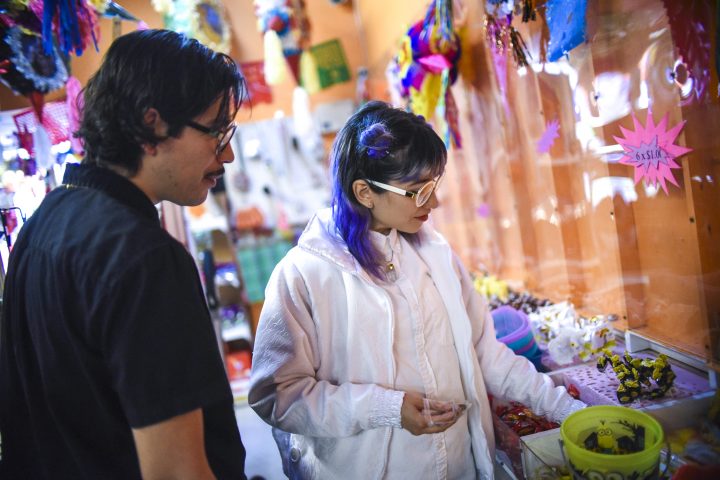 Shiro Schwarz is the peculiar Mexico City duo created by Pammela and Rafael, representatives of the white and the black of a mysterious funky universe. In their universe we find spectacular dark disco grooves paralleled with a sexy mood. The sensual conjunction of their voices adds to the provocative elements of their lyrics which playfully décor Rafael’s synthesizers, provoking smooth, contagious and danceable funk rhythms. There’s also a vivid 80s theme that harmonizes the virtual worlds of Pamela’s visuals which merges harajuku, pop culture and pixelated and glitch elements for an extrasensory and electrify-ing voyage. 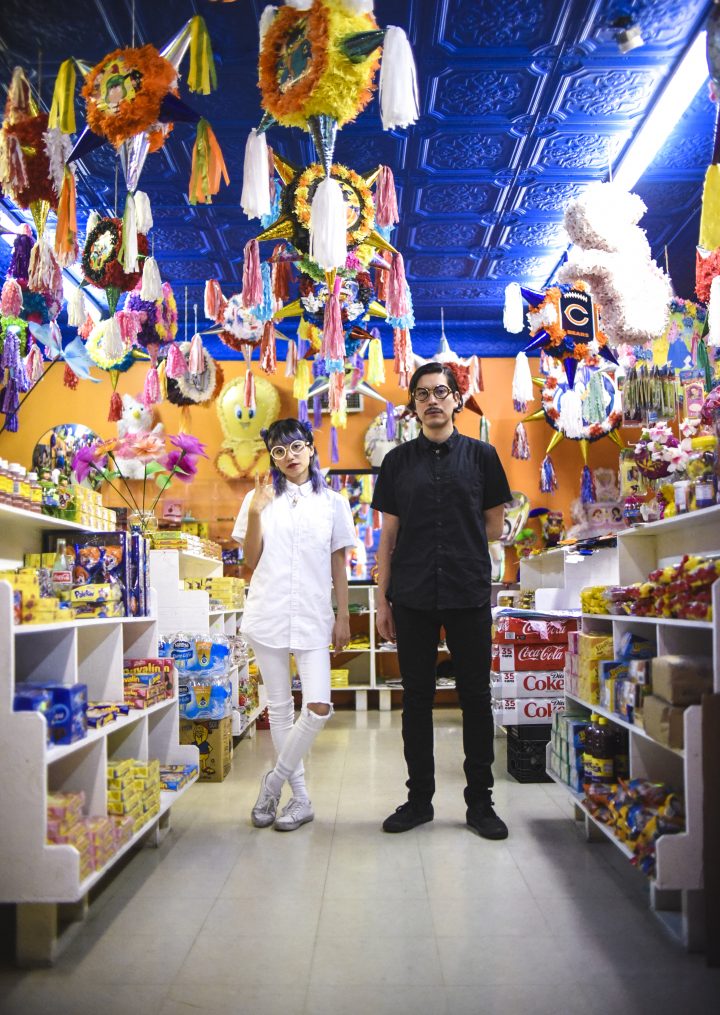 The yin-yang of this project flourishes from their appearance: Shiro translates to “white” in Japanese, a culture that seems present in Pamela’s life from an early age, and a color that evokes tranquility and hope; while Schwarz means “black” in German and represents a depressive period  in Rafael’s life when he lived in Germany and London and was forced into formalities. Owning the black and white within themselves requires discipline, as much discipline as they reflect in their music and visuals, waving their mysticism along with analog and digital technology and the contemporary with the vintage. 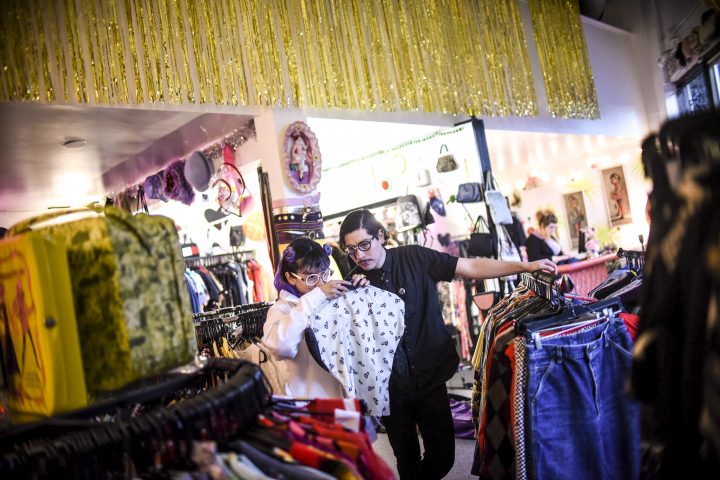 So our second stop was Very Best Vintage, an eye-popping treat of colorful gear whose mantra attracted Shiro and Schwarz. Interacting with only white and black colored clothing, the couple floated among rare 70s and 80s attire. It was the perfect setting for this duo that takes their offbeat aesthetic – rounded glasses, glossy luxurious jackets and delineated silhouette outfits – seriously. 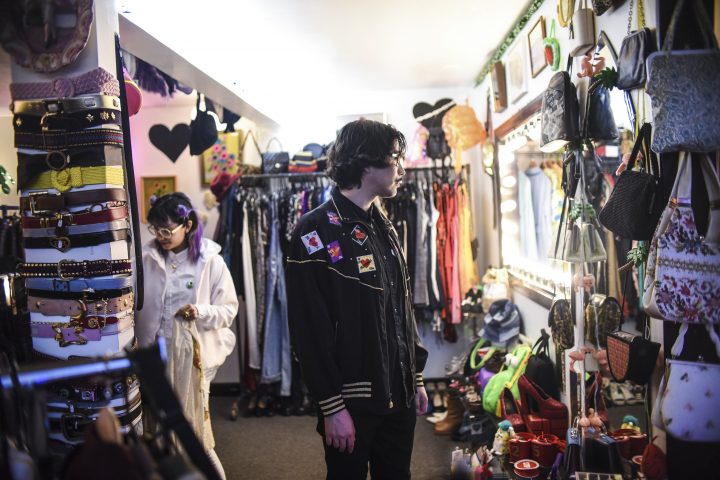 Our next stop was 606 Records, a local independent record store, where co-owner Tim Unsell welcomed and showed us the collection of Star Creature Universal Vibrations releases, among them Shiro Schwarz 7” Limited Edition (I don’t know why b/w Move your body) and the latest Star Creature EP, a compilation album 12’’ EP of Shiro Schwarz (the reason for their 2016 U.S. fall tour). Pammela and Rafael happily connected and narrated the struggle of becoming who they are today. 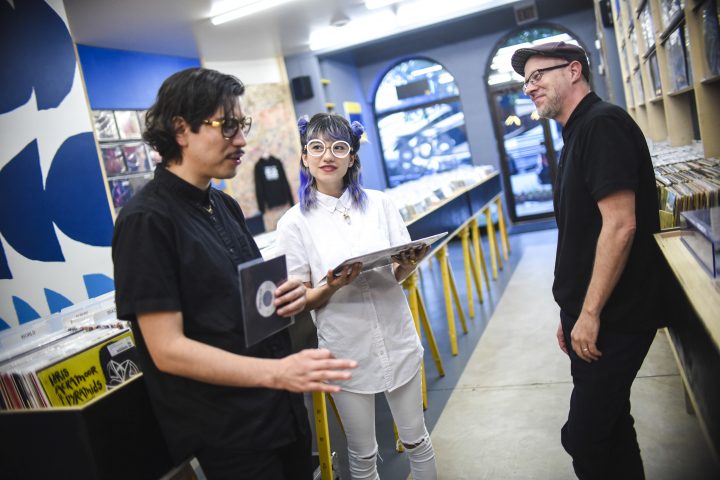 Paths can come in different ways and sometimes it’s just because you follow your instincts and what makes you feel the most joy. This duo found their musical path after experimenting with different aliases: RGB, PR_RM and Triplet Media, a journey of experimental, 8-bit, minimal techno and deep house. Inspired by Breakbot (“Baby, I’m Yours”) and O’Bryan (“Lovelite”), they finally decided to change genres. Rafael explained, “When I heard them I decided to dedicate my music career to this.”  And that’s when they entered the world of funk music. Although the genre isn’t well known in Mexico, they accepted the challenge. 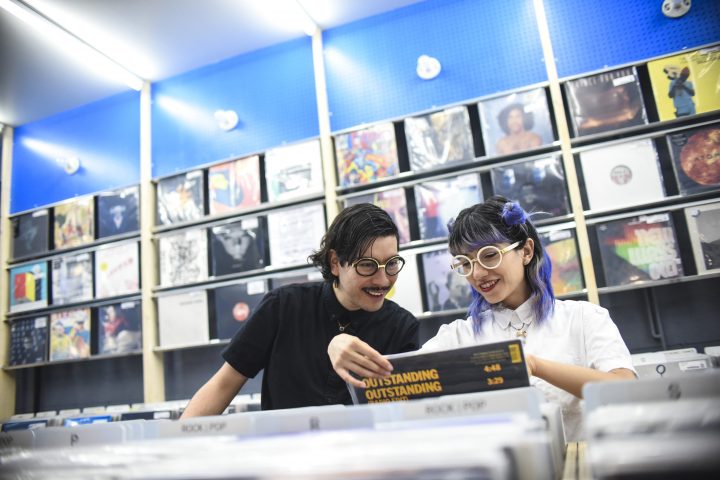 Without borders — as is disco, disco funk, boogie and vaporwave, among other related genres — the duo have been away from their home city and trekking all over the world – in Berlin, Barcelona and the U.S. where they met Star Creatures Crew at the Modern Funk Festival in Los Angeles.

This genre has no ethnicity and Star Creature Universal Vibrations knows that. This active Chicago record label run by Tim Zawada and Ben Van Dyke promotes and curates an eclectic selection of dance hits, disco, boogie and electronic beats. Its fine selection makes it one of the best international indie record labels managing the most outstanding space funk disco, futuristic and contemporary sounds as well as the sexiest rhythms. It’s simple music. It’s organic bits without pretentiousness and instead exquisite quality. 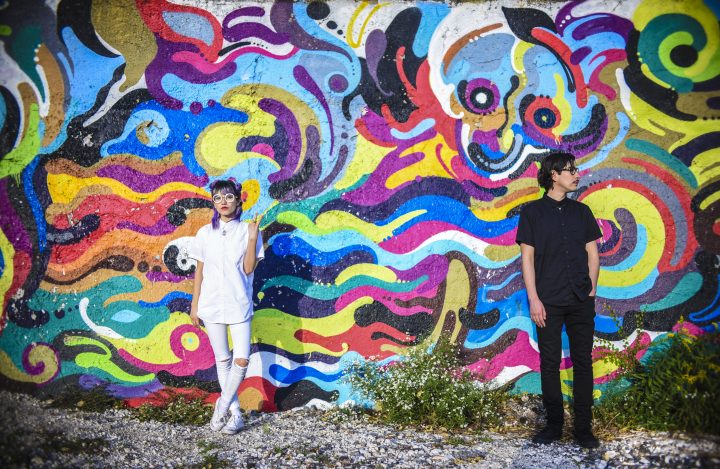 Continuing our Pilsen voyage, we turned towards the 16th Street Murals. As we walked, Shiro Schwarz encountered a curious onlooker who, based on Pammela and Rafael’s peculiar appearance, offered to join them and invited them to visit Blue 1647, an open space where you can learn different digital skills such as coding and programming. But what this stranger didn’t know is that they are already proficient in that field. Beyond their music and performances, Shiro Schwarz plays with innovative visuals along with programming their beats.

After avoiding the temptation of a churro, Rafael spoke about his favorite gadgets, his synthesizers, especially his most precious one, his Prophet 8. For Pammela, it was her sewing machine, her camera and her iPhone. (Having a personal office and desk handy at all times is something that many of us can identify with!) 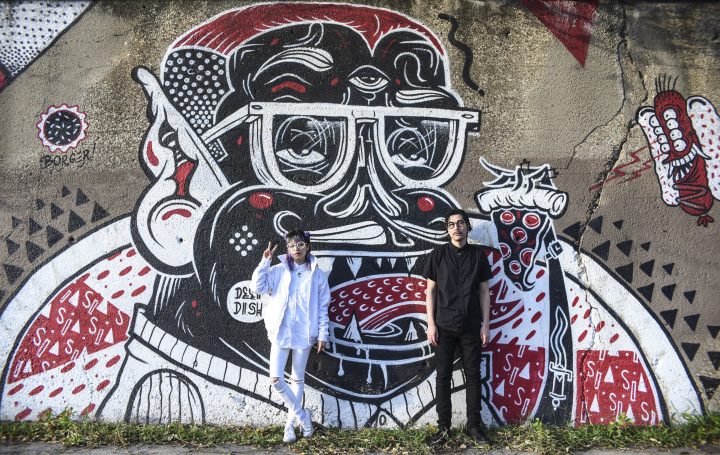 Once we were at our final destination, with the duo choosing their favorite murals for the photo shoot, we found the secret of their chemistry which could’ve been easy to imagine but more beautiful to hear it from them. It made Carolina and I fall more in love with them. They explained that their creativity flows from their mutual admiration for one another and connecting their Shiro Schwarz essence by each producing what each does best and then working on the final product together.

Being sensitive beings, Shiro Schwarz left the critiques aside a long time ago. They would rather create organically and respect each other’s process and work. We notice the joy in the details of each song along with the love and the passion that surprises us every time we hear them… like a simple tamarind candy with a soft filling.

For more information on their presentations in the US & Chicago, visit: http://www.shiroschwarz.com/dates.html

Stephanie Manriquez is an independent writer and journalist in Chicago. She is on the editorial board of contratiempo magazine and part of the music enthusiast duo “The Ponderers.”

Carolina Sánchez is a freelance photographer currently based in Chicago. She has been part of gozamos since 2011 and her work focuses on the Latino music scene in the city.