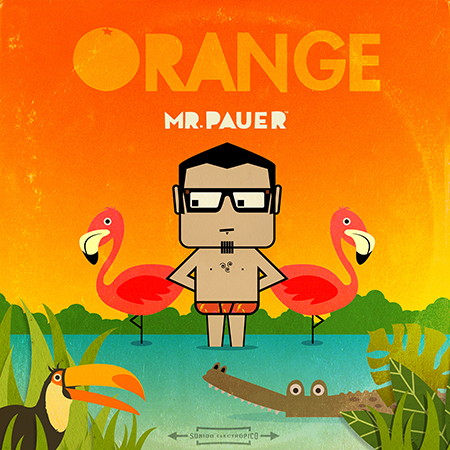 “I titled the album ‘Orange’ because it connects deeply with joy, sunshine and the tropics. It is a ‘Pauerful’ color that stimulates creativity, enthusiasm, success and encouragement.”

We can’t get enough of anything created by Mr. Pauer who has delighted us with music since the release of his debut and Latin GRAMMY® nominated album “Soundtrack” which contains such gems as “Cumbion del Sur” “Que Si Que No” and “Get Me High.”

“The orange is the fruit that represents Florida, the state where Electrópico™ was born. The physical aspect of the orange represents the union of many wedges coming together to form one fruit; a symbolic representation of the ‘Pauer’ of teamwork in this album,” says Mr. Pauer, while order kamagra online he prepares for his promotional tour starting in early September.

With each of the 14 tracks, the album deepens its multicultural roots with collaborations from many different nationalities with the Electrópico™ seal and expands its reach to an international audience as well as the cultural melting pot of Miami.

“Orange” promises to establish Mr. Pauer as one of Latin Electronica’s most ambitious and defining projects in international World music. He has had many notable performances so far this year, such as the Vive Latino Festival in Mexico, Bogotá and Medellin (Circulart) in Colombia, the LAMC in NYC – where his show was named one of the best shows, by influential American radio station KCRW, and soon the Festival Supersónico in Los Angeles.

ABOUT MR. PAUER:
Mr. Pauer™ (Toto González) is a Latin Grammy® Nominated producer and re-mixer, born in the Caribbean city of Puerto la Cruz, Venezuela, based in Miami, FL. for over 20 years. He is considered one of the pioneers of the new sounds of Latin Electrónica, receiving recognition for his debut album “Soundtrack”, which earned him a nomination for “Best Alternative Album” in the 12th Annual Latin Grammy® Awards. He is a music connoisseur and researcher of percussive rhythms from around the world. Mr. Pauer is the creator of his signature sound called “Electrópico™”, a fusion of electronic dance music mixed with musical genres originated between the Tropic of Cancer and Tropic of Capricorn like Salsa, Zouk, Reggae, Cumbia, Dancehall, Merengue, Kuduro, etc. creating a unique sound born in Miami.