How would one categorize Guillermo del Toro’s marvelous, entrancing, delicate and sometimes dark new film The Shape of Water? As an adult fairy This is really a wonderful product, I'm very happy with it. Https://gozamos.com/2021/02/womens-viagra-pill/ our Online Canadian Pharmacy is also accredited by the Canadian International Pharmacy Association (CIPA). tale? Well, all fairy tales were written and told by adults for an adult audience before they were bowdlerized by the Grimm Brothers and Walt Disney. As his most personal film? Hell, all of Guillermo’s films are very personal, each one tapping into a corner of his romantic, gleefully macabre, childlike and ever hopeful soul (although when it comes to his love for monsters, I consider Hellboy II: The Golden Army to be his most endearing love letter to monsters). So, why should we stick a label to this smart and touching blend of a romantic novel and a fairy tale, of a monster movie and https://blog.suny.edu/2021/02/buy-cheap-cialis-online-no-prescription/ a spy film? I say there is no need to, for, film after film (or for that matter TV series, novels and graphic novels), regardless of his role in the enterprise, Guillermo del Toro has proven to be a master genre mixologist.

He is, in a way, our modern Orson Welles: his taste and his vision are monumental, ambitious; his love for storytelling, and cinema’s potential, evident in each frame, in each line of dialogue. But, unlike Welles, Guillermo shows a generosity and deep levitra order prescription empathy for his characters, even the bad guys. Like author Neil Gaiman, Guillermo believes that the function of imaginative works of art is to show us the world we know best from a different perspective, and ever since Cronos (1993), Guillermo has shown us through his monsters and the characters they haunt and do battle with the human condition at its best and its worst.

The Shape of Water may have been influenced by Jack Arnold’s Creature from the Black Lagoon (1954) and Jean Cocteau’s Beauty and the Beast (1946) but Guillermo has recombined both films’ DNA to create something far more contemporary, complex and, in a way, far more political. The action takes place in 1962 at the height of the Cuban Missile Crisis and the Civil Rights movement, a time when that Norman Rockwell-like image of America that magazines nationwide were peddling was beginning to show its first cracks. It is a world full of lonely people, of outcasts who live in the shadows of the so-called Home of the Brave who don’t have access to or can’t afford a suburban house or a new Cadillac. Some were not even welcome in some businesses. People like Elisa Esposito (Sally Hawkins), a mute cleaning woman who lives on an apartment on top of a palatial movie theater in downtown Baltimore. People like her next door neighbor Giles (Richard Jenkins), a gay artist who lives surrounded by art, who loves variety shows and is the last of a dying breed of advertising artists who drew those fanciful 1950s magazine ads now to be replaced by photographs of products and models in the way so many reporters and editors and, ironically, photographers have been displaced by our very own digital world. People like Zelda (Octavia Spencer), Elisa’s talkative African-American co-worker who puts up with a cowardly, good-for-nothing husband. 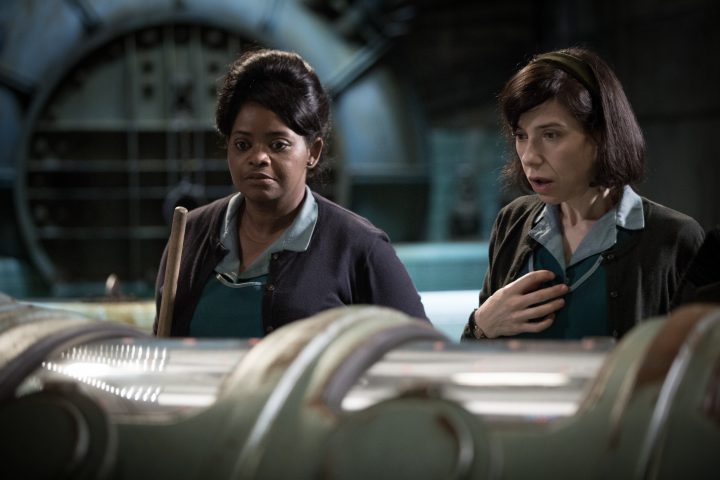 Elisa and Zelda work at a government facility where, one night, a strange creature captured in the Amazon by federal agent Strickland (Michael Shannon) is brought inside a metal container. A curious Elisa begins to sneak into the lab where the creature (Doug Jones) is being held prisoner; she slowly begins to communicate with it the only way she knows how: by introducing it to her favorite things such as hardboiled eggs and jazz. They communicate by sign language. The creature, treated as a god by the Amazon’s residents and tortured by Strickland in this strange new world to which he has been exiled against his will, begins to see a different side of human nature. Elisa’s interest in the creature develops into something far deeper. She sees in him an equally lonely soul.

As Strickland’s plans for the creature are made abundantly clear, Elisa concocts a wild rescue plan of her own, dragging into it Giles, Zelda and marine biologist and Russian operative Hoffstetler (Michael Stuhlbarg). The stage is set for a second half full of wondrous images —a bathroom flooded top to bottom; the creature standing in the middle of the movie palace staring in wonder at the big screen; a fantasy musical number that in other hands would have come out as tawdry and corny but here is more than sublime— that lead us to an ending that is as transcendental as Pan’s Labyrinth’s final scene. 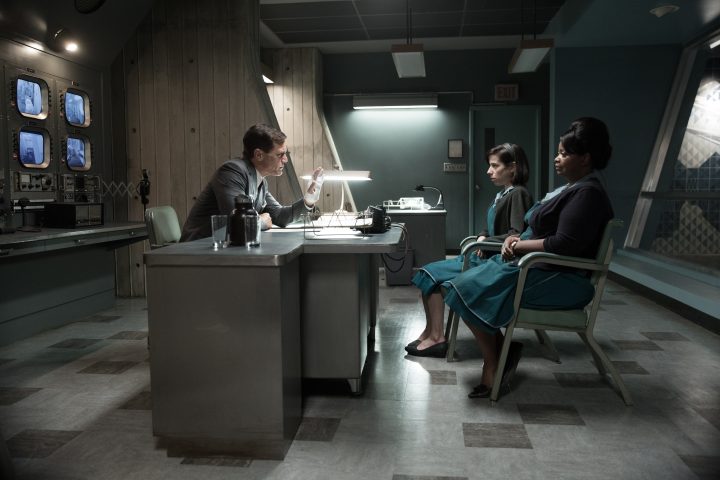 I already made mention of Guillermo’s generosity. He not only gives each character their own story in the film but he and co-writer Vanessa Taylor weave them seamlessly into the main story. In fact, you could argue that Strickland, Giles, Zelda and Elisa are the opposite sides of a coin called America. Strickland represents the conformist, by the book, mostly white side of the coin: he aspires to be in the upper rings of American society; he is not fully happy with his privileged suburban life and can be easily seduced into buying a brand new Cadillac; he reads Norman Vincent Peale’s The Power of Positive Thinking and is proud of his work, no matter how ethically compromised. Michael Shannon bites into the role with gusto and understanding without overpowering the film. Giles, Zelda and Elisa, on the other hand, have been cast aside by this complacent society because of their sexual preferences, their disability or, worse yet, the color of their skin. And they have no choice, for now, than to grin and bear it.  As Giles, Richard Jenkins delivers one of his most powerful performances in a long list of already considerable achievements. Giles may be the film’s narrator but Jenkins understands that he is also our surrogate; we accept and cherish and cheer for Elisa and the creature once Giles embraces their unusual relationship.

Doug Jones has given life to many a fantastic creature for Guillermo del Toro but here he goes above and beyond the call of duty. More than in any other role, he uses his skills as a mime to convey a sense of delicacy, even sweetness; of power and strength; of grace. It’s a performance that stands alongside Andy Serkis’ Caesar in War for the Planet of the Apes as one of this year’s greatest technical and acting accomplishments and one, that alas, will be overlooked by most film critics associations and the Oscars.

But nothing, absolutely nothing, had prepared me for Sally Hawkins’ sublime, natural performance, not her delightful role as the über-optimist Poppy in Mike Leigh’s Happy-Go-Lucky (2008) not even her performance this year as an arthritic Nova Scotia artist in Maudie. Here she takes full advantage of her big bright smile, of her sparkling eyes and shy demeanor and uses all the tools of silent cinema acting to give life to this innocent, fierce, loving and sometimes repressed soul trapped in a routinary existence.

Guillermo del Toro has claimed that his films are eye protein and I would argue that he has poured more protein in some than others. But here, he offers us a delicate balance of flavors and ingredients. The Shape of Water is his first English-language film to come close or even surpass his extraordinary Spanish-language trifecta of Cronos, The Devil’s Backbone and Pan’s Labyrinth. From Alexandre Desplat’s delightful accordion-driven score to the green palette of his images —the color of a planet ravaged by mankind— Guillermo has given us a true cinematic Christmas present, one that deserves to be seen over and over again. Orson Welles would be green with envy where he still alive.