The best books, the best movies, the best music, in fact, the best works of art offer an uncompromising view of the world its creators live in. “The Diary of a Teenage Girl,” Marielle Heller’s pull-no-punches adaptation of Phoebe Gloeckner’s semi-autobiographical hybrid novel of the same name, is such a work. Unlike other teen-driven dramas, it doesn’t resort to cutesy and clever film references as “Me and Earl and the Dying Girl” does to win the hearts of cinephiles, nor does it resort to a “disease of the week” plot to inspire you nor does it feature eccentric, bumbling parents or potentially embarrassing sexual encounters to make you laugh (although there is plenty of sex in the film). It features a unique, refreshing female point of view (I wish I didn’t have to use the word unique, that we had more teen films driven by a female perspective).

That point of view belongs to the teenage girl of the title: 15-year-old Minnie who, as the film starts, cheerfully declares “I had sex today. Holy shit.” More than a great opening line, it is a declaration of intent. This is HER story and potentially the story of many teenage girls who have embarked on their own journey of self-discovery. It’s a declaration that will make you feel a tad uncomfortable, especially after she reveals that had sex with her mother’s thirtysomething boyfriend Monroe (Alexander Skarsgard). But this, after all, is the mid-1970s, long before statutory rape laws were fully enforced; a period when that city, and for that matter the rest of the country, were about to begin dealing with the after effects of the counter revolution.

Minnie lives with her divorced mother Charlotte (Kristen Wiig) and busybody younger sister Gretel (Abby Watt) in San Francisco’s Castro district. Charlotte hosts almost nightly sessions of binge drinking and coke-snorting with her friends while spouting feminists dictums (Patty Hearst is, for her, the ultimate feminist). Once Minnie has sex for the first time, losing her virginity in the process, she finds that she can’t hold back, that she needs to share her experiences with someone. She begins to keep a diary on an old tape recorder, leaving her tapes scattered around her room. She also shares her experiences with best friend Kimmie (Madeleine Waters) who is undergoing her own sexual journey. 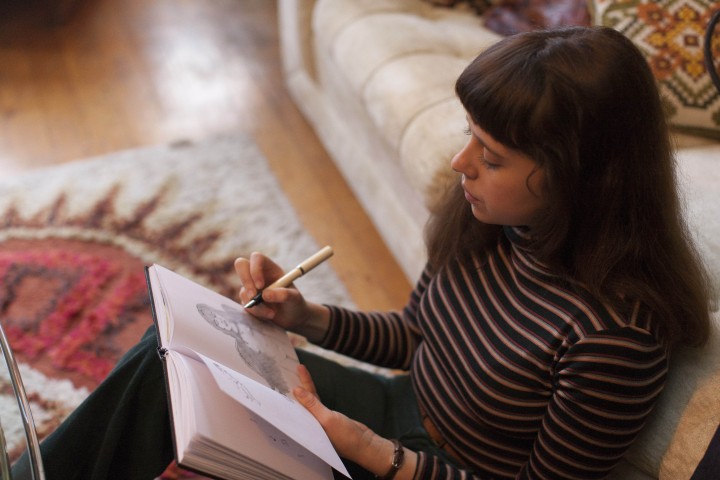 That one sex act has awakened something new in Minnie, a hunger that she can’t satisfy and doubts about her own appearance. Not only does she frequent Monroe’s apartment (and falls in love with him) but begins to experiment on her own with fellow classmates. Inspired by the work of underground artist Aline Kominsky (with whom Minnie has imaginary conversations), she also discovers an innate ability for drawing. Her illustrations and drawings come to life in the screen, a visual representation of her desires, doubts and misgivings. Created by animator Sara Gunnarsdóttir, the drawings are a clever and organic way to illustrate Minnie’s journey. They enhance the film and our connection to her. Some are explicit in nature, some are cute, but they are all the product of a vivid imagination coming to terms with her identity. “The Diary of a Teenage Girl” is not only the story of a girl about to take her first steps towards womanhood but also the story of a budding artist discovering her own voice and vision.

The story is entirely told from Minnie’s point of view and in 23-year-old British actress Bel Powley, Heller struck gold. Powley delivers a performance that’s equal parts gleeful, sad, vulnerable and strong. It’s a naked performance, literally and metaphorically. When in one scene she stands in front of a mirror, fully naked, questioning her body, her attractiveness, she is speaking for hundreds of 15-year-old girls. Her narrative voice carries us through the myriad emotions she has to juggle: it’s resilient, doubtful, plaintive.

Heller’s never judgmental about her characters, although one can’t avoid being somewhat critical of their behavior, especially when it comes to the adults. Charlotte, for example, pretty much neglects her responsibilities as a parent while indulging in every single vice with her friends. It’s almost as if these adults are living in denial: they won’t acknowledge that the counter-culture died a painful death and that darker days lie ahead. Minnie learns, from their behavior and her own experience, that actions are not consequence free and that sooner rather than later you will have to face the music. In the end, she grows up to be a more mature and grounded person than these adults.

Heller’s greatest triumph lies in letting her and Gloeckner’s characters come to this realization without the tsk-tsking of a moral majority. “The Diary of a Teenage Girl” is, then, a film to be treasured: a mature, confident, brave work of art that celebrates sexuality, womanhood and growing up.