Congratulations, Solo: A Star Wars Story! You are the first of this new batch of Star Wars films to have left me indifferent. Whereas I have revisited The Force Awakens, Rogue One and The Last Jedi, with you…well, let me say that once will be more than enough. It’s not entirely your fault. God knows director Ron Howard and his entire cast and crew did their best to pick up the pieces and deliver a final product after directors Phil Lord and Chris Miller (The Lego Movie) were fired three weeks before final photography was completed last year. As we say in Spanish, “hicieron de tripas, corazón.” But that’s what Solo: A Star Wars Story is really in the end: a product.

Hell, even though Rogue One replaced Gareth Edwards with co-scriptwriter Tony Gilroy for the reshoots, that film at least had a unity of vision, it was consistent from beginning to end. It was the war movie Edwards envisioned from day one. It had a heart; it inventively reenacted a piece of Star Wars mythology and filled in the blanks. It felt like it belonged in this universe. Solo: A Star Wars Story is just a series of incidents and plot devices tied together by a rather weak story. Yes, we find out how Han acquired his last name (in one of the most frustratingly head-slapping, cringe-worthy, unimaginative moments of the film) and how he met Chewbacca and Lando Calrissian, and we witness his legendary Kessel run in all its The Empire Strikes Back asteroid-belt chase glory. But it never digs deep. For a movie named after its lead character, we never really get to know this young version of the legendary gun-for-hire that well. As played by Alden Ehrenreich, this Han Solo is just a compendium of ticks and attitudes, a Han Solo-wannabe, really.

As the film opens Han and girlfriend Qi’ra (Emilia Clarke from Game of Thrones) are on the run in planet Corellia from crime boss Lady Proxima’s (a large centipede-like creature voiced by Linda Hunt) henchmen after stealing a small amount of Coaxium, the mineral used as fuel by the Empire’s starships. Separated at Corellia’s spaceport, Han promises Qi’ra that he will come back for her. But to do so, he needs to become a pilot and so he desperately enlists in the Empire. Han’s unruly anti-authoritarian behavior gets him kicked out of the Academy and sent to fight for Empire’s ground forces, becoming another grunt, cannon fodder, if you will for the Empire’s many military incursions. 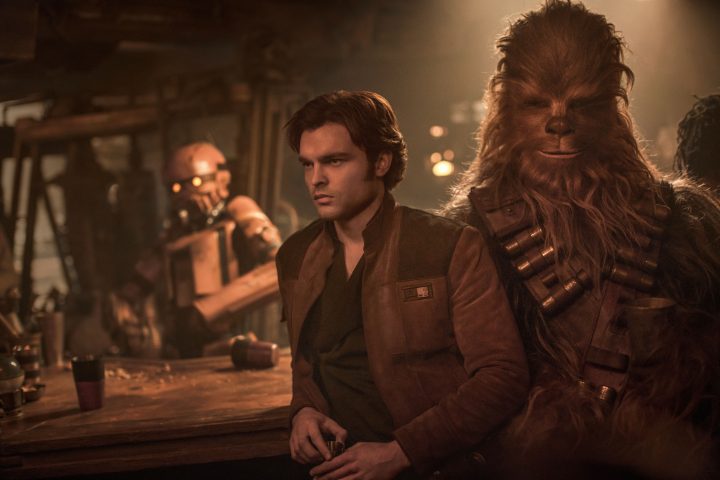 It is in one of these many skirmishes that Han meets a group of smugglers led by Tobias Beckett (Woody Harrelson) who eventually invites him and a young Wookie by the name of Chewbacca (Joonas Suotamo) to join their ranks and help them with their next business venture: to take by assault a monorail full of Coaxium in a snowy planet. This sequence eerily reminded me of a similar (and much better executed) one in Captain America: The First Avenger which also involved a train, snowy mountains and the retrieval (well, kidnapping, really) of a mad scientist played by Toby Jones. The operation, of course, fails and, deep in debt with mafioso extraordinaire Dryden Vos (last minute replacement Paul Bettany, a.k.a. Vision, joyously chewing the scenery), Han proposes repaying Dryden by mounting a similar operation deep in the mines of planet Kessel. But this time, they will be supervised by Dryden’s top lieutenant, none other than Qi’ra. Cue Lando Calrissian, cue the Millennium Falcon and cue the aforementioned Kessel Run. Call me old-fashioned but I was far more moved when I once again saw Han’s rusty space bucket in The Force Awakens, than the shiny, still new version we get in this prequel. It was like running into an old friend, one you hadn’t seen since college. Here, the Millennium Falcon’s introduction is just another item to be checked out in the producers’, writers’ and director’s checklist.

In a way, we know how this story is going to end. And it should be fun and exciting to witness these events that were talked about in previous films. But, alas, it isn’t. The filmmaking is efficient, no doubt about it. But, that edge of your seat thrill I felt watching the original trilogy and the newer films, that desire to join these characters in their adventures, to travel to this galaxy so far away, so long ago, wasn’t there for me. There are, yes, some sequences and moments that come close to capturing the devil-may-care spirit of a movie titled after one of the series’ most roguish characters. The father and son writing team of Lawrence Kasdan (co-scriptwriter of The Empire Strikes Backand scriptwriter of Return of the Jedi) and Jonathan Kasdan beautifully strip down the camaraderie and chemistry that defined the Solo-Chewbacca partnership to efficiently —and sometimes with a tongue firmly planted in their cheeks— build it back up. Their scenes not only are meant to sound and look like the space opera equivalent of a buddy cop movie, they are the only ones that allow Ehrenreich to ease into the role without feeling the pressure of becoming Harrison Ford redux. And yet, he could have been so much better. I don’t blame him: I blame a script and a direction so concerned with meeting fan expectations that it doesn’t give Ehrenreich room to breathe much less for his character to grow. The Kasdans and Howard could have done for Han what J.J. Abrams and others did with the recently revamped Star Trek franchise: to reinvent his character without betraying his essence. 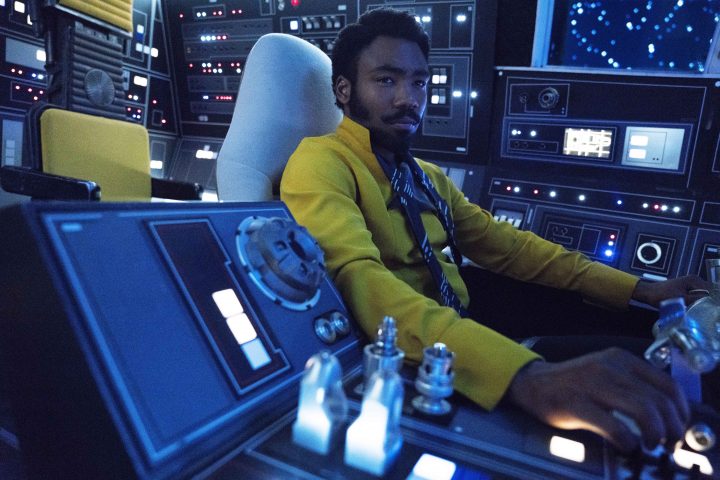 There are also moments full of pathos, moments that take your breath away, and moments of sheer subversive humor that briefly elevate the film from the ho-hum, most of them involving Lando’s partner and co-pilot L3-37 a robot fighting for the civil rights of her fellow automatons voiced by Phoebe Waller-Bridge. As Lando Calrissian, Donald Glover is smooth as silk: in his smile, his too relaxed demeanor, his hand-wringing and the flourish of his capes, you can see Glover’s interpretation of Lando eventually turn into the sly scene-stealing character Billy Dee Williams portrayed in The Empire Strikes Back. And I wished the film had done more with Qi’ra, since it sets her up as another one in a long line of strong female characters in the franchise. But the script, towards the end, is so concerned with double crosses and pulling the rug from underneath these characters that the performances get lost in the muddle Bradford Young’s murky, muddy, ugly photography helps little in our enjoyment. It, more than anything else, brings the film down. I hate to think what Solo: A Star Wars Story will look like in 3D.

Critics have accused Disney and Lucasfilms of trying to Marvelize the Star Wars universe. And even though Edgar Wright (Shaun of the Dead, Baby Driver) left Ant-Mandue to those pesky creative differences, you at least have to give executive producer Kevin Feige, whether you love him or hate him, credit for letting the likes of Taika Waititi and James Gunn play with the Marvel toys and turn out films that defied our expectations and were fun. With Solo: A Star Wars Story you can’t help but feel that executive producer Kathleen Kennedy and Lawrence Kasdan decided to pull back the reins on their creative team after the idiotic (I’m sorry but it was) backlash against The Last Jedi. Yes, Kennedy, the Kasdans and Howard have given fans what they wanted.