Tell me if you’ve read, heard or seen this story before: a privileged member of society (preferably white) is facing a personal crisis when he or she meets a noble member of a minority group whose wisdom will offer a way out of this person’s predicament, maybe eve a path to redemption. Their worlds briefly collide as each tries to make sense of the other’s culture. Even so, a strong bond develops between them even though each will eventually go back to their respective places in society. Spanish filmmaker Isabel Coixet’s inert, pedestrian and inconsequential drama “Learning to Drive” is such a story.

Patricia Clarkson plays Wendy, an acclaimed and well-employed book critic —the movie seems to take place in a parallel universe where print critics of any kind are still well-employed and earn a six-figure salary— who has just found out that her husband has been having an affair with a much younger woman and wants to divorce her. The news sends her on a downward spiral. As someone who has spent her entire life surrounded by books and words, she lets her mind drift to happier times, imagining conversations with her soon-to-be ex and her father.

Daughter Tasha (Grace Gummer) wants her to travel to Vermont where she is studying. The only problem is that, like a true Manhattanite, Wendy has never felt the need to drive in a city where public transportation, and her husband, has more than sufficed. The film’s title gives away what happens next: Wendy decides to take driving lessons. Her teacher happens to be none other than Darwan (Ben Kingsley), the Sikh taxi driver who witnessed her breakup and who, the following day, returned a package she had left behind in his cab. 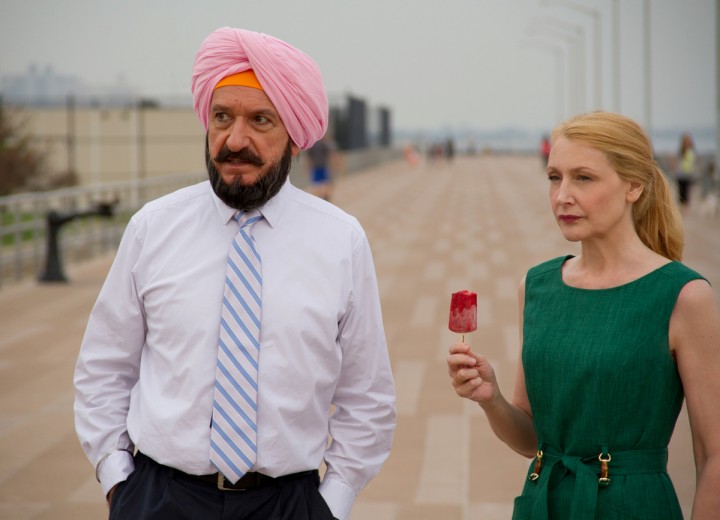 Darwan is actually the first character we meet in the film. He lives in a cramped apartment with five other men, one of them his nephew, most of them undocumented. Darwan is the only American citizen in the group after being granted political asylum in this country. Unfortunately for him, in this post 9-11 world, most Americans can’t or don’t want to tell the difference between religions and ethnicities and Darwan has no choice but to bear the insults whites, Latinos and other ethnicities hurl at him. In their minds, he is a Muslim, even though his turban says otherwise. His sister back in India is trying to find him a bride; after rejecting several candidates, Darwan settles for Jaleen (Sarita Choudhury) who has never left her homeland and speaks very little English.

Darwan infuses his driving lessons with the kind of dime store feel-good platitudes that are supposed to sound profoundly ethnic, deeply spiritual and distinctively other. He is a calming presence while Wendy is a wreck, focused while Wendy can get easily distracted. The implication is pretty damn obvious: learning to drive is akin to learning to live, to accept change. Driving will give Wendy’s aimless, chaotic life direction. This new experience will allow her to tackle life as a divorced woman, to wrestle any challenges to the ground. Driving will turn her into a brand new woman while Darwan settles down to a quiet, conventional pre-arranged life with his new bride as she slowly emerges from her own cocoon.

Scriptwriter Sarah Kernochan has drastically altered Katha Pollitt’s original autobiographical essay published in “The New Yorker.” Pollitt’s driving teacher was Filipino; changing him to a Sikh could have opened up the door for some real drama. But in doing so, Kernochan has, intentionally or not, turned Darwan into the contemporary equivalent of the all-knowing spiritual guru that so many white hippies (and personalities like George Harrison) took on as mentors in the 1960s and early 70s. At least, she and Coixet offer glimpses of what it means for an immigrant like Darwan to live in New York’s melting pot: his frequent visits to the local Sikh temple, the ICE raids, the racial tauntings, the family member who wants break with tradition, the solidarity Jaleen receives from the women in the Sikh community. These glimpses are far more interesting than the two-handers between Wendy and Darwan and even Wendy’s coping with her divorce. Alas, they are only that: glimpses that never fully coalesce into a full picture.

Clarkson tries really hard to bring to life a severely schematic character. Coixet is so low-key in her direction and the script is so obvious in its self-help, zen-like tone that moments that are supposed to be charged with emotion, that are meant to make you care for these characters feel flat, listless. Kingsley, an actor who never does wrong even when he is working with weak material, is forced to play with only four registers: dignified, wise, simmering and quiet. That he pulls it off with such élan is a credit to his passion and commitment as an actor.

The cinematography and the editing (by the always reliable Thelma Schoonmaker, who is here given nothing to work with) are bland. “Learning to Drive” as a whole looks and feels like the kind of old-fashioned made-for-TV movie the networks used to broadcast over the weekends back in the day to fill up any holes in their programming. “Learning to Drive” contains the seeds for a much better film. They unfortunately fell in the hands of the wrong gardeners.