“I really pay attention to opening credit sequences, I think it is the way to get the audience’s mind attuned to what’s going to follow for the next two hours or so,” Spike Lee told film critic Sam Fragoso in an interview published in “The Atlantic” last February during the release of his Kickstarter-funded horror film “Da Sweet Blood of Jesus.” And in “Chi-Raq,” Lee delivers a humdinger of an opening title sequence.

A red flashing title card that screams “THIS IS AN EMERGENCY” is followed by a lyric video for Nick Cannon’s song, “Pray 4 My City,” especially written for the film. It’s an angry song, full of outrage and frustration. The sequence ends with a series of statistics comparing the number of American casualties in Iraq and Afghanistan with the murder rate in Chicago in the last decade. Lee thus sets the tone for what turns out to be one of his most heartfelt, powerful and personal films. Here’s the Spike Lee we all admire since he burst into the filmmaking scene with “She’s Gotta Have It” in 1986: a filmmaker who has found in cinema the perfect tool to express his thoughts, his concerns, his unique worldview. Love him or hate him, agree or disagree with him, Lee is still a force to be reckoned with.

Based on Aristophanes’ classic play “Lysistrata” and inspired by the actions of Nobel Peace prize laureate Leymah Gbowee who led a women’s movement that proved pivotal in ending the Second Liberian Civil War in 2003, Lee and co-writer Kevin Willmott leave no stone unturned in addressing the myriad issues affecting African-American communities across the United States and in Chicago’s South side. The film opens at a hip-hop concert where Spartans gang leader Chi-Raq (Cannon) is performing. Automatic weapons are pulled by rival gang the Trojans and shots are fired when, halfway through the concert, Chi-Raq and his followers taunt them from the stage and through social media. Later that evening, while making love with his girlfriend Lysistrata (Teyonah Parris), Trojan gang leader Cyclops (Wesley Snipes) sets fire to her house.

Days later, Patty, the 11-year-old daughter of neighbor Irene (Jennifer Hudson) is killed after getting caught in the crossfire between both gangs. Lee and Willmott tactfully focus on the aftermath: a mother arrives to the scene of the crime to discover her baby’s body wrapped in a bloodstained white sheet and screams in anguish, begging her neighbors to speak out, to break the code of silence. Hudson taps into her own experience as a victim of violence —her mother, brother and nephew were killed in a shooting in 2008— to drive home the pain that countless African-American mothers suffer at the sight of their children lying dead on the streets of Chicago. Her screen time may be brief (too brief as far as I am concerned) but her character’s silence and tears skillfully underline many of the points Lee’s characters will make throughout the film without recurring to platitudes or rhetoric. 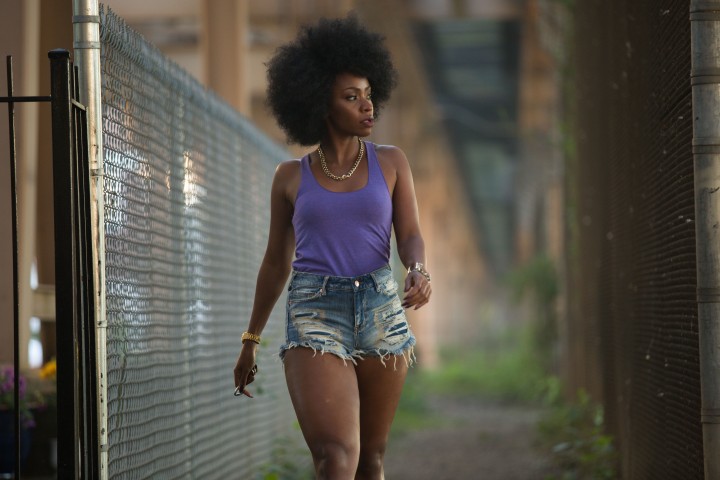 That little girl’s death moves Lysistrata, now living in community activist Miss Helen’s house (Angela Bassett), into action. She persuades her Spartan sisters and their Trojan counterparts to join her in a campaign that will deprive men of any sexual pleasure until they agree to put their weapons down and make peace. The campaign —with its rather direct slogan of “No peace no pussy”— catches fire: even prostitutes and sex phone line operators join in the crusade. Women worldwide, from Pakistan and the Dominican Republic to Brooklyn, take to the streets in support of Lysistrata and her army as they take over a nearby National Guard Armory and hole themselves up in it. Not even Chicago’s mayor is getting any action and this drives the powers that be and African American men in the neighborhood and in the city insane. Countless attempts are made to either dissuade them or sabotage their efforts, including piping The Chi-Lites “Oh, Girl” through a PA system outside the Armory leading to one of the film’s few musical numbers. But these women are made of steel and nothing, not even The Chi-Lites, can lead them astray.

Spike Lee declared from day one that “Chi-Raq” was a satire and as with all satires, some of the comedy hits the mark and some, as the scene involving the Armory’s head honcho, a randy white-bearded confederate-flag loving racist, completely miss it. But Lee and Willmott are not interested in making you fall out of your seat in laughter. Satire is just one of the many tools they use to address the issues that lie at the root of this violence: lack of investment in minority communities; single parenthood; misogyny; access to guns; lack of opportunities; the glorification of violence; lack of role models; government corruption, etc. And if you thought that Lee wouldn’t tackle the recent cases of police brutality given the film’s focus on black on black violence think again. Black Lives Matter all right, it’s just that Lee believes in seeing the big picture, in presenting a holistic perspective. 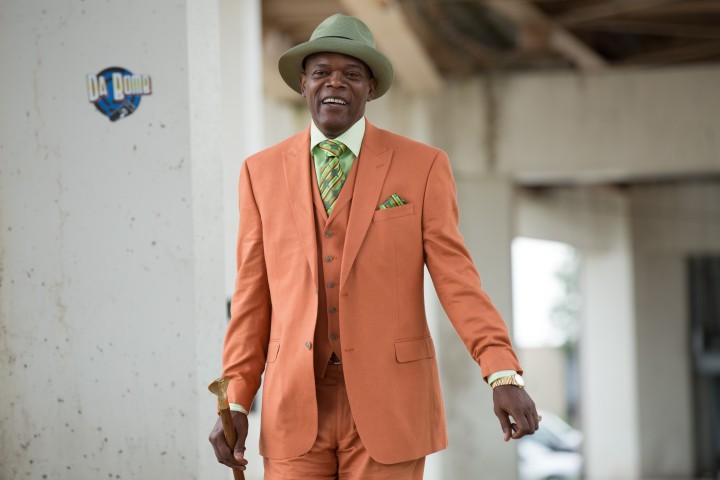 “Chi-Raq” is a movie that celebrates the power of language. Words and ideas matter and are primarily given life by the three characters who stand as the film’s conscience: one-man chorus Dolmedes (Samuel L. Jackson relishing the opportunity to speak in verse) who, besides setting the stage for each act, questions some of the contradictions that drive this tale of two cities; Father Mike Corridan (John Cusack), a character inspired by St. Sabina Church’s Father Michael Pfleger who fearlessly connects the social and economic dots that have led to this crisis in his sermons and who, unlike some in the Catholic Church, believe in a hands-on approach when it comes to serving his congregation; and Miss Helen, a woman who invests in the intellectual well-being of the community, continually challenging her sisters by re-introducing them to their culture, their history and to a world of ideas.

“Chi-Raq” is a movie of the moment for the moment. Just last month, 9-year-old Tyshawn Lee was executed in an apparent act of gang retaliation in the city’s South side, breaking with long standing gang codes, codes that the film refers to as well. “Chi-Raq” may or may not feel outdated in a couple of decades. It is both a call to action and a reflection of the moment we live in. It is also a film full of hope and faith for the untapped potential of a community capable of doing great things when it finds common ground…and when the powers that be finally do the right thing by investing in that community. But most importantly, it is the work of a man who cares deeply for his community and who felt that the time had come to use the one weapon in his arsenal that could make a difference, a weapon that depends on carefully framed and edited shots to tell a story…a weapon called the moving image.