In his flute-filled jazz trip “Vidala Triste,” Gato Barbieri sings a pithy rhyme that might sum up the multivalent efforts of Roberto Carlos Lange—more popularly know as the man behind Helado Negro, one of 48 artists who will be performing at Ruido Fest in Chicago this weekend. In his 2009 mixtape for Now Again Records, Lange includes Barbieri’s lyrics from this song: tocando y andando, andando y tocando. Roughly translated, if however lacking the syncopation and seduction of Spanish generic prescription viagra rhyme, the words evoke travel and play, or a state of being while walking and playing music. (In addition to meaning “playing music”, the word “tocando” also broadly translates to the act of touch.) In the context of Bardieri’s pace-like driven song we understand the words to imply the steady, inspirations and thoughts collected from a long walk, the loneliness of travel, a sadness wrought from playing one’s instrument out like worn and torn feet along an arduous path.

Though technically instrument-less, Lange’s musical progress as an electro-synth singer takes on the similar ethos of a wanderer, meandering playfully between textures and tones. His  internationally-acclaimed project, Helado Negro follows suit, spanning continents and genres money order for buying levitra of art. Lange is an experimental electronic pop producer, video and sonic sculptor and singer-songwriter. And just like a sculptor, he has built up quite a collection of improvised and handcrafted masterpieces. Raised in a Floridian “bizarre paradise,” capturing a myriad of musical influences, Lange commented in our recent interview:

“Diversity adds to the culture there […] Growing up in a Caribbean neighborhood [in Fort Lauderdale], I took the diversity buy cheapest propecia for granted. It was what it 100 mg cialis was. As a kid all you want to do is leave and not be a part of anything that your parents force you to be a part viagra with no prescription in britain of, the culture your parents bring as immigrants. That’s what they want and want their kids to know. I realized when I was older, I took it all for granted. I just assumed that’s how the whole world was. In hindsight it was a beautiful thing.”

Despite the misgivings of youth, Helado Negro’s beautiful world grew with its progenitor’s journey to art school in Savannah, GA. There he was learning animation and delving further into his experimentations with sound and the evocations of sensitive and sensual experience—an amalgamation of wrong turns and lessons learned. Somewhere between the electronic experimental computer music and the acoustic melodies of old school Latin American pop-folk groups, the historic landscape of Lange’s artistic voyage might be defined.

The artist’s journey, however, also detours and converges in the visual arts community and the video art representations of Helado Negro. Reflecting on having gone to art school for animation, Lange confides, “I’ve always gravitated to moving image. I was heavily influenced by this animator Norman McLarin. That was a really early influence on my music. The people I work with, maybe I have some kind of unconscious influence with how they develop the videos.” And you can feel the sense of creative community and experimental play in productive and sincere ways when Lange continued: “All of the people who’ve made videos with or for Helado Negro are people I know. There’s a common respect there….[For] the most part I’m very vocal and opinionated about how I’m being represented. In that form of collaboration you have to have a constant dialogue.” 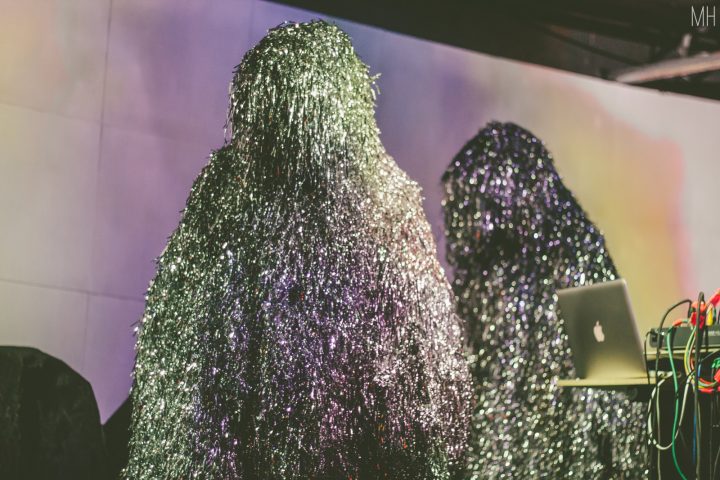 Lange managed to take the musical influences in his cache—from folk balladeers of his youth and the breakbeat 80s hip-hop drum machine laboratory of his college days—and foray into animation and globe trotting instrumental trip-hop tours through Japan. Like a modern beat poet or cyborg troubadour who learned Pro Tools at a young age, his vocal externalizations took time to bubble and brew within him. The culture junkers amongst us might appreciate Lange’s steady pairing with Asthmatic Kitty Records. Helado Negro’s recent Island Universe Story: Select Works, a collection of cassette-tape recordings traversing imagined and real worlds and stages and friendships encountered performing throughout the globe. This collection of interior and exterior worlds highlights Lange’s prowess as an experimental electronic producer, particularly having toured through Japan at a very young age under the guise of his experimental trip-hop moniker, ROM, with longtime buddy Matt Crum.

While touring as ROM—which recently released a killer collection of complex and hypnotizing, polyrhythmic instrumentations on 7’’ on Hausu Mountain Records, called Possible Mountain—Lange learned a lot about being a musician on the road. Gaining chops as a producer, Lange flexed all his creative muscles in the digital spectrum, amassed ROM a reputable discography. Taking inspiration from his days in the Miami clubs listening to ragga jungle and hard techno Lange reflects:

“There was this club on the beach, in South Beach called Beat Camp. On the floor there would be this super fast Miami-base with guys free-styling over it. Upstairs would be this whole UK experimental computer music, more beat driven world. That was prior to me leaving to college. I got fascinated with making hip-hop, instrumental base. That’s how I got into releasing music. It’s hard for me. I don’t think a lot of people know. Only people who are close to me know I’ve got a lot of records out in the hip-hop world. There’s so much freedom for me in that, this process of learning by doing.”

Exposed to hip-hop beat culture is where Lange learned- by watching emcees and their modes of performing,. Lange continued, “I admired so much and [wanted to be] transforming it into something that’s my own.”

Lange’s work is definitely in dialogue with something grand. The throwback Now Again Records mixtape I mentioned earlier still holds a lot of significance to our recent conversation in preparation for Lange’s upcoming Ruido Fest performance. The mixtape spanned the Latin American diaspora of ballads and crooning melodies in the very same way Lange’s work with Helado Negro imbues a sense of history while triumphantly innovating upon and transcending identity barriers. Lange commented on the restrictions of genre, ethnic identifiers and the public’s limited knowledges of lyrical lineage via his youth:

“In terms of music, just listening to music, enjoying music, especially Latin American music. Listening to South American music all the time, a lot of people have the constant description or prescription of what it means to be Latino and the type of music. I grew up listening to so much music sung in Spanish because that’s what my parents like to listen to that. There’s so much South American music that spans a variety of styles beyond the cliche of what the world knows as Latin Music. I never knew Latin Music to be timbales and congas.”

This fluidity and transient identity and sonic identifiers mark Helado Negro’s delicate tone and vibrant sculptural qualities. Lange’s vocals, at times, sound akin to Andean flute-work patched into and looped back out into a rising mountain-range of electronic feedback. “I still don’t consider myself part of any specific scene, If anyone has listened to any Helado Negro music people know I don’t make anything specific. What I make is specific to me. It’s a plural type of music. I’m a plural person. I’m not trying to exist in the specificity of it.” Speaking about the success of his unintended political anthem, “Young, Latin and Proud,” and echoing his prior self-determination and self-identification as a creator and multifaceted human being, Lange left me with some strong words. “I could never say I could define myself around ethnic identity. I felt false for feeling like I didn’t have that confidence in definition. I realized later as I get older, the beauty in having diversity within in you. To the outside world, that’s the world I exist in. You’re lumped into these roles but as a young person you’re defiant towards it. Growing older I learned you’re never going to understand it all and you’re not supposed to. It’s more important to define it for yourself.”

Helado Negro will be performing at Ruido Fest on Friday, July 9 at 3:40pm! Please see RuidoFest.com for tickets, schedules and more information.