“In my town, there was nothing else but music – there was really nothing to do, so everyone plays a musical instrument!,”  exclaims Gustavo Ramírez Sansano, Artistic Director of  Chicago’s Luna Negra Dance Theater. Ramírez Sansano, seated on the floor with the curiously elegant grace innate to great dancers, is conversing in one of the rooms the company uses to rehearse. He is describing his childhood in San Fulgencio, a small town of about two thousand people in Valencia, Spain. Ramírez Sansano’s own father, in fact, founded the town band, and all his siblings play musical instruments. However, from when he was about age three, it was clear to the family and in particular to his mother, that Ramírez Sansano was born to dance. 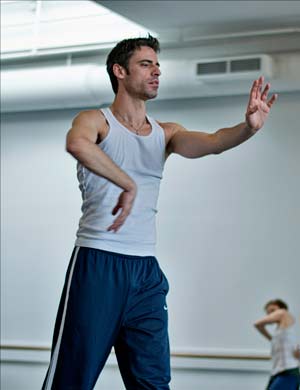 The now highly recognized choreographer laughs as he describes dancing at about that early age to the music of Miguel Bosé, a Spanish rock star, which prompted his mom, a dance-lover, to create choreographies for him. Somewhat later, this led to a decade at the local dance school, then further studies that included training with renowned Cuban classical dance teacher Karemia Moreno in Barcelona, followed by a professional life which has taken Ramírez Sansano from Madrid to Holland to Chicago’s Hubbard Street, multiple awards and commissioned pieces and now since 2009, the artistic direction of Luna Negra.

A classically trained dancer, Ramírez Sansano noticed early on he had interest in structuring how people moved through space, and he has now been choreographing for nineteen years. He is preparing for the debut of Carmen.maquia, Luna Negra’s version of Bizet’s Carmen and the first full-length piece the company has approached.

Choreography is a fascinating art, he comments: “Once I decide I want to do something, it’s very strange, I have to see it all in my head, from beginning to end, with the dancers going from place to place. That may take a year.” The next step is negotiating with other talented artists, such as the costume designer and set designer (in the case of Carmen.maquia, David Delfín and Luis Crespo, respectively) to develop the vision so that no part – neither scenery, sets, costumes nor dancing – takes precedence, but they all function, says Ramírez Sansano, “as a balanced whole.” Finally, he adds, it is crucial to be able to transmit and communicate to the dancers the vision of the choreographer, and the piece may actually continue to evolve as the dancers play out the movements in rehearsals.

In the case of the iconic and beloved Carmen, Ramírez Sansano began by watching a number of opera productions. It was a challenge to tell the story, he muses, “in a new and original way without killing its original essence,” so he opted for concentrating on the basic elements of the tale and reviving them in a contemporary form by envisioning the narrative in the context of Picasso’s paintings.

Ramírez Sansano is hailed as one of a recent wave of Spanish artists within the performing arts’ avant garde. He comments that the new artistic vitality evidenced in Spain comes from emerging from a long period of dictatorship: “You are so drawn to what is foreign and are so excited by the artistic advances of other countries who have had freedom. We learned about what was happening outside of Spain but also had what we received from the great artists who have been in Spain throughout history.”

However, at the end of the day, says Ramírez Sansano, quoting his beloved teacher Karemia Moreno, all artistry is really “about praxis” – a true devotion and discipline to making this uniquely special art, complementary to music. He adds:  “The body makes music, although you cannot hear it. It redraws a rhythm, and all of the universe is rhythm and needs rhythm to be organic and healthy.”

But ultimately, Ramírez Sansano emphasizes, it’s the audience that completes the creative act by giving it meaning: “Dance and music are arts that are not literal, that words cannot reach. They can always be reinterpreted no matter what the composer or the choreographer says, and what it means to you – no one can take that away.”

Check out Catalina’s blog and the archives of Beat Latino (and like Beat Latino on FBtoo!) to explore the roots as well as trends in Latin musical arts.