While olives have existed for millennia, it was not until last year, when Angelina Jolie reportedly gave Brad Pitt a 200-year-old olive tree for Valentine’s Day, that this Mediterranean staple finally reached the celebrity it deserved. Olives are officially cool. 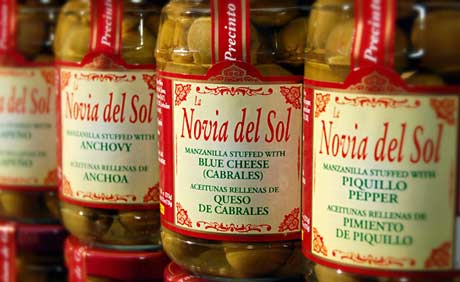 From ancient Greece to modern times, olives and olive oil have been consumed across the Mediterranean and beyond. The definitive origin of the olive tree and its cultivation has been lost to time, but the European species of the tree, Olea europaea, is the bearer of the fruit we most often enjoy. Of course, as the first person to attempt to eat olives undoubtedly discovered, eating the fruit directly from the tree results in a bitter face made; olives must be cured to achieve the flavor we’ve come to expect. The curing procedure, along with the degree of ripeness when picked (by hand), determines the flavor and texture of the fruit. Green olives are picked unripe, while brown and black olives fully ripen on the tree.
However, green, brown, and black hardly describe the variety of olives available today. In Spain alone, you’ll find almost 300 regional variations, each with a unique flavor and appearance. From this abundance of variety Spain accounts for roughly 35% of the world’s annual production, top amongst olive producing countries. The most popular on Spanish tables are manzanillas, most originating from Andalusia. Light green and with an abundance of flesh, these are often found stuffed with anchovy, piquillo pepper or blue cheese. Gordal olives, known as queen olives in the United States, are mostly grown in Andalusia as well; the fat, fleshy olives are another popular choice for stuffing with any number of ingredients. In Catalonia, arbequinas, small, brown olives with a nutty flavor, are typically served alongside pan tumaca, oven-roasted bread slices spread with tomato and olive oil.

At the end of the day, friends and families often gather in restaurants, bars and homes across Spain to enjoy drinks and tapas, with a dish of olives all but guaranteed to be included. This traditional means of consumption can be easily replicated to evoke fond memories of a visit to Spain, but contemporary chefs have taken the ubiquitous olive to new realms of culinary creation. Ferran Adrià, head chef at El Bulli and considered one of the greatest chefs in the world, offered the “spherification of olives,” using techniques of molecular gastronomy to encapsulate olive juice in perfect spheres that burst in the mouth. Andalusia’s Michelin star-winning chef Dani Garcia has featured olives in ice cream, sorbet, jam, cream and chips. Meanwhile, in New York, pastry chef at WD-50, Sam Mason, experimented with an olive pop tart consisting of pureed olives topped with dehydrated olive pieces. Obviously, olives will always maintain their traditional place on Spanish tables, but the ancient fruit has shown an ability to adapt to modernity, and thanks to these chefs and Angelina Jolie, perhaps can even be considered cool.