Talking to Michael Rodriguez, founder of El cialis 40mg Ritmo School of Latin Percussion, is both inspirational and humbling. His personal history, vision of El Ritmo and his unyielding dedication to keep the program is it allegal to buy viagra online free is a testament to his love of community and culture. “There’s nobody who’s teaching kids about their culture for free. I feel that it’s our responsibility. People tell me I’m crazy and that I could make money with this, but in my heart I don’t feel it’s right. It’s like me taking your car and using it as a taxi. It’s not mine to take for my benefit. This is something that’s been passed down from generation to generation, and I’ve just been blessed to learn it.” 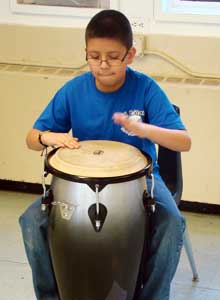 Rodriguez first took an interest in congas when he was 14. He sat in on a neighbor’s band practice and approached the conguero about taking classes. Rodriguez recalls, “He must have heard it a thousands times from people who weren’t really serious. The next week he brought a videotape and said, ‘Learn everything on this videotape. Then I’ll start teaching you.’ I didn’t even have a set of congas. I drew two circles on a canada viagra pharmacies scam folder and started practicing the techniques from this video on the folder. After that, the band broke up, and I didn’t see him again. He doesn’t know how much he changed my life.” But things soon took a negative turn for Rodriguez. “When I started hanging out with people who played congas, I got into the whole drug scene and drinking and partying with the bands.” Then at a church picnic, a pastor invited cialis without prescription Rodriguez to play with the church band. Rodriguez credits the church generic levitra uk with saving his life.

Soon, El Ritmo School of Latin Percussion took root when a young man at his old church asked Rodriguez to give him conga classes. The young man, who was in foster care and had a history of problems, enjoyed the classes and began bringing friends. “I felt like this was something that I could use to help the community and use it as a way to attract kids to something that was positive, ” explains Rodriguez. He started a regular program at the church, but it was cut to make room for a new football program. He later moved to Grace and Peace Community Church and started El Ritmo there about 4 years ago. Students of all ages now flock to the community center at 2100 N. Kildare every Saturday afternoon.

Rodriguez, a self-taught musician and minister, starts and ends each class with a short voluntary prayer. “I don’t shove my religious beliefs down people’s throats because I know that’s a big turn-off. But I’m hoping that when people see what I do and see how I try to be genuine about it, my walk will do the talking.” The class then warms up with group exercises before students get to work on their individual curriculum. The structured curriculum covers a broad range of Latin percussion instruments (auxiliary instruments, congas, bongos, timbales) and rhythms (rumba, soca, merengue, and more). Unlike other programs, El Ritmo offers a self-paced curriculum. Students receive individual lessons, and they practice as much as they need to in order to pass a test. Then they move on to the next rhythm or instrument.

El Ritmo’s impact on its students’ lives is significant. Several students I spoke to said that El Ritmo is like a family and their participation helps them focus better in school. Rodriguez recalls how quiet and sheltered one student used to be, and how she has turned into a social butterfly since taking classes at El Ritmo. Also, with its family-friendly atmosphere, El Ritmo offers busy families a space to spend time together. Rodriguez’s own children, all under the age of 12, participate in the classes. Their extraordinary percussion skills can make anyone’s jaw drop.

In the future, Rodriguez hopes to get non-profit status and open up his own facility for El Ritmo. “If we were to get our own facility, I honestly believe that with the concept of El Ritmo and the way that we’re trying to impact the community, that there would be government grants, foundations, and drum companies that would see the heart behind El Ritmo and would support it. It takes a village to raise a child. If our goverment and the people in our community don’t want to sow into things like this, but they’ll spend billions of dollars to build a new jail and then they’ll privatize it to make money off of crime, then we can’t complain about our kids and the 24 shootings that have happened in the past two days in Chicago if we’re not giving our kids a positive outlet.”

For more information about classes at El Ritmo School of Latin Percussion, in-school workshops, or to make a donation, contact: