Steve McQueen pulls one hell of a cinematic juggling act with Widows, his follow-up to his harrowing and essential masterpiece 12 Years a Slave. Co-written with Gillian Flynn (Gone Girl) and based on Lynda LaPlante’s 1983 six-part British mini-series of the same name, Widows is a traditional heist movie with a lot on its mind and, against all appearances, a natural follow-up to 12 Years a Slave. Both films deal with the politics of oppression, with the effects of racism and sexism on a community and on society; in fact, Widows shows how nothing has truly changed, how racism and inequality are still part and parcel of America’s tapestry (and I use the word America here to refer both to the United States and to the entire American continent). McQueen and Flynn deliberately changed the setting from Thatcher-era London to present day Chicago with its racially and economically segregated neighborhoods, its patriarchal machine politics and the strange alliances it engenders. However, this is not a preachy film. Its take on Chicago politics may be simplistic at times (Spike Lee’s Chi-raq has a better ear on the ground when it comes to tackling disenfranchisement in our fair city); but when Widows explores these issues through the experiences of its four female leads, in other words when the political becomes personal, it packs quite a wallop. It’s also an incredibly thrilling rollercoaster ride.

The opening scene has been dissected by countless critics and will continue to be dissected for years to come: McQueen immediately sets the tone for what’s to come, what’s at stake, as he cuts back and forth between a tender bed and shower scene between Chicago Teachers Union executive Veronica Rawlings (Viola Davis) and her husband, professional burglar Harry Rawlings (Liam Neeson) with the heist he and his gang try to pull off later that evening. Harry and his team die in an explosive crossfire with the police, leaving Veronica in sorrow (the film later reveals that Harry’s death comes shortly after her son was gunned down by a Chicago police officer in another case of driving while black) and the other three wives —Linda (Michelle Rodríguez), Alice (Elizabeth Debicki) and Amanda (Carrie Coon)— bereft and deep in debt. Linda loses her business and is shunned by her in-laws; after suffering from years of physical abuse, Alice is coerced by her equally abusive mother in joining an escort service; and Amanda is left all alone to take care of her newborn.

Harry’s target was Jamal Manning (Brian Tyree Henry), a former gang leader now trying to go legit as a candidate against current 18th Ward alderman Jack Mulligan (Colin Farrell), son of political boss Tom Mulligan (Robert Duvall), a mix of both Richard J. Daley and Illinois House speaker Mike Madigan, in a special election. The ward lines were recently redrawn, turning the 18th Ward into a majority African-American district. Jack is also facing a corruption trial involving the misappropriation of funds destined for the expansion of the Green Line. Manning was counting on the $2 million Harry and crew stole to fund his campaign. He turns up at the door of Veronica’s luxurious Gold Coast condo to demand what’s rightly his while menacingly squeezing her cute, fluffy dog’s neck. 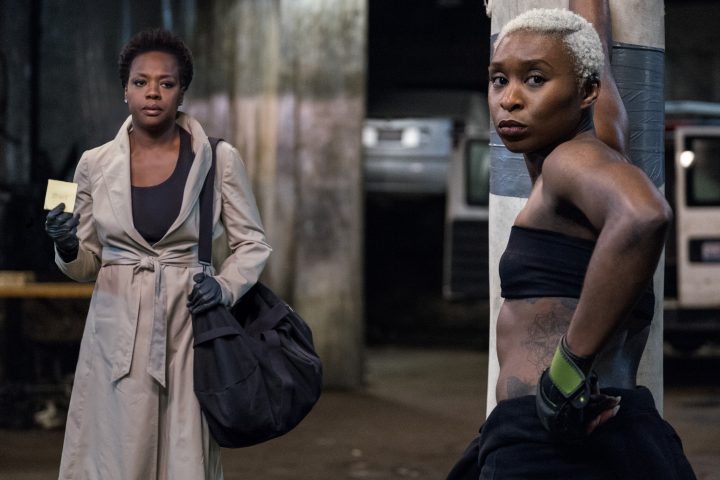 Harry left behind a notebook containing the details of his next heist. Unable to sell it in the black market, Veronica reaches out to Alice and Linda and suggests that they carry out the job which would net them $5 million, two of which would be destined to pay Manning. They agree to sign up; Amanda, however, proves indifferent and nonchalant when Veronica approaches her. When Veronica’s driver is killed by Jatemme (Daniel Kaluuya), Manning’s loose cannon of a brother, and his crew, Veronica has no choice but to agree to recruit Belle (Cynthia Erivo), a single mother and beautician who has to take on babysitting jobs to make ends meet, as their driver. Veronica’s interactions with Belle are a prime example of how McQueen makes the personal political: here we have two strong African-American women separated by the same economic disparities that have split their city apart, one representing an African American upper middle class living comfortably in downtown Chicago, the other a working-class mother for whom survival in the city’s impoverished African-American neighborhoods is both a necessity and an art form. Davis and Erivo’s scenes together are magnetic, raw, powerful. And yet, McQueen reminds us that Veronica’s social and financial status doesn’t exempt her from the same injustices and indignities endured by African-Americans. In fact, given the dubious source of her riches, Veronica’s fate is far more precarious.

The learning curve for all four women is steep, the cards stacked against them. Part of the thrill is to see them employ their particular set of skills (empathy, anger, their strong will and resourcefulness) to accomplish their tasks and, in some cases, even fail at them while danger, in the form of Jatemme’s continued surveillance, nips at their heels. He is the invisible (and maybe even invincible) force that threatens to derail their plans. Daniel Kaluuya is quite simply sublime as the psychotic, podcast-obsessed henchman who one moment is holding a book and the next pulls out a gun from his jacket, his hypnotic, unhinged gaze doing most of the talking. Just look at the scene where he interrogates the two young men who were supposed to keep watch over the now stolen money: the camera circles around him and his prey as Kaluuya’s body leans to one side, his head bopping to the rhythm of the rap lyrics written by the two young men as they recite them to, suddenly, deliver one of the most brutal coup de grace in the history of heist movies.

Viola Davis had already taught Denzel Washington a lesson or two in understatement with her Oscar-winning performance in Fences, but here she is required to hold her emotions at arm’s length most of the time, to show a strong façade when needed, to be all business as her character puts this plan together, to be the pillar of this organization. She smiles little, her body tense, ready to spring into action which is why when, in the privacy of her home, she lets go, the sorrow and pain feels that much more devastating. Viola plays each note, each register with the mastery of a jazz musician.

Although I wish Michelle Rodríguez had more screen time, she is given one of her meatiest roles to date and she tears at it with gusto. Just look at her eyes and her body language as her in-laws turn against her during her husband’s funeral: the sadness, the pain, the sheer weight of what she is about to endure alone against the world. This role marks a turning point in Rodríguez’s career. Debicki and Erivo are, however, the true revelations. Alice’s transformation from victim to a self-reliant woman is a wonder to behold: subtle, deliberate and empowering. Erivo, however, stands out with her sassiness; just when Widows begins to lag, rhythmically, with its juxtapositions between these women’s ordeal and Chicago’s male-dominated politics, in comes Erivo in the second half of the film to jump start the proceedings with an energy that one can aptly describe as Chicagoan.

When it comes to the portrayal of Chicago politics, there are moments in the film that don’t ring true for somebody who has lived and even covered the city for so long. Sometimes, they feel shoehorned in, as if they belonged in another movie. I found it hard to believe that only one reporter would drill Jack Mulligan with questions about the Green Line scandal at a public event in the South Side when Chicago reporters are notoriously aggressive and competitive. Also, to ignore the role Latino politics and Latino politicians have played in the city in the last decades is shortsighted (especially when, in real life, the 18th Ward is, still, mostly Latino even though that community is slowly but surely being pushed out of the district by gentrification). Some of Farrell’s dialogue about the state of Chicago politics felt too on the money, too obvious. Yet, Manning’s meeting with a powerful African-American pastor is as finely observed as anything out of Lee’s Chi-Raq. Still, Widows is a powerful ensemble piece and a thriller that actually thrills. McQueen reminds us that genre films can be as profound as any so-called art film. That they can entertain as well as be about something.