Austin, TX based band Superfónicos is the musical meeting point between Colombia, Africa and the U.S. Their debut E.P. Suelta, which is already out, pays homage to all three locales with a foundation in Cumbia, sprinkled with healthy doses of Afrobeat and marinated in the school of funk. The fast rising eight piece act has also been confirmed to play the Austin City Limits Music Festival (Weekend Two) on Sunday, October 14th. 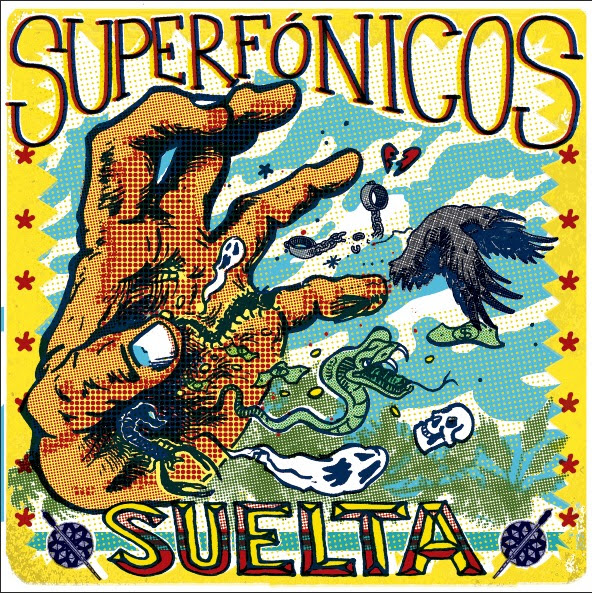 Superfónicos was formed when bassist Nico Sanchez and guitarist Erick Bohorquez began discussions about creating a group with a foundation in Afro-Colombian rhythms. They soon teamed up with guitarist Andres Villegas and percussionist Daniel Sanchez, and started rehearsing together during time away from their other projects. That core group developed the band’s unique sound, laying the foundation for what was to come. In 2016, gaitero and vocalist Jaime Ospina relocated from Colombia to Austin, where he met and instantly connected with the group.

The band’s success has been the outcome of organic growth and auspicious timing. For example, Nico explains how meeting Jaime was such a natural extension on making the band complete, “I always knew that traditional Colombian instrumentation like the Alegre drum and Gaita flute would play a central role in the band, but I never expected someone that had studied with the Maestros back in Colombia to just land in Austin. Jaime was literally in town for 6 hours before we met and right away I knew he was the right front man for Superfónicos.” With the addition of Jaime the band booked their first performance in November 2016 and hasn’t slowed down since.

From there the band began performing around Austin with notable sets at the Levitation Music Festival, KGSR’s Blues on the Green, and SXSW 2018, where the Austin Chronicle picked them as an Austin “Breakthrough Band.” Soon national attention came from NPR’s Alt.Latino who spotlighted them as a rising act from SXSW and shortlisted their Tiny Desk Concert entry as a “LatinX Artist They Loved.”

Their highly anticipated debut EP, Suelta, which means, “let go” is an inspiring message in today’s political climate where governments want to build walls instead of bridges. Nico elaborates, “the theme of ‘letting go’ pertains to xenophobia, racism, misogyny, homophobia, classism, all of which are driven and propagated by people’s fear.” He adds, “We are at a turning point politically, where the few in power are trying to maintain their grip on these outdated mindsets, but the overwhelming majority are no longer buying into the divisiveness of the previous generations and are ready for a change. Only by letting go of our fear can we break down these walls.”

The EP was produced by Superfónicos and recorded at the respective studios of GRAMMY award winners Adrian Quesada’s Electric Deluxe Studio (Brownout, Black Pumas, Money Chicha) and Beto Martinez’s Leche House Studio (Grupo Fantasma, Brownout, Money Chicha), who engineered the sessions. The release was then mixed by Carlos “El Loco” Bedoya, who has worked with Missy Elliot, Beyonce and Chocquibtown.

The six track release starts with the title track “Suelta,” that grooves over cumbia/rock and encourages all to “let go” of the things in life that hold us back. The horns drip with funk, bubbling around Evan Marley’s organ lines and rounded out by Andres Villegas searing guitar solo. “Rio Negro” continues the journey and is about being fed up with the hypocrisy of modern life in the cities of the world. It urges the listener to wake up and return to a simpler and more peaceful life back in nature. Nico Sanchez’s pulsing bass line drives the song  from psychedelic afro-funk to syncopated freak out and finally culminating in a full blown Cumbia party down by the Rio. “Ethiopian Dust” is the only instrumental on the EP. It is a tribute to the great Ethiopian composer Mulatu Astatke. The title is both a reference to the yearly summertime cloud of African dust that engulfs the city of Austin, but also to the fuzzed out guitar tone during Erick Bohorquez’s guitar solo. 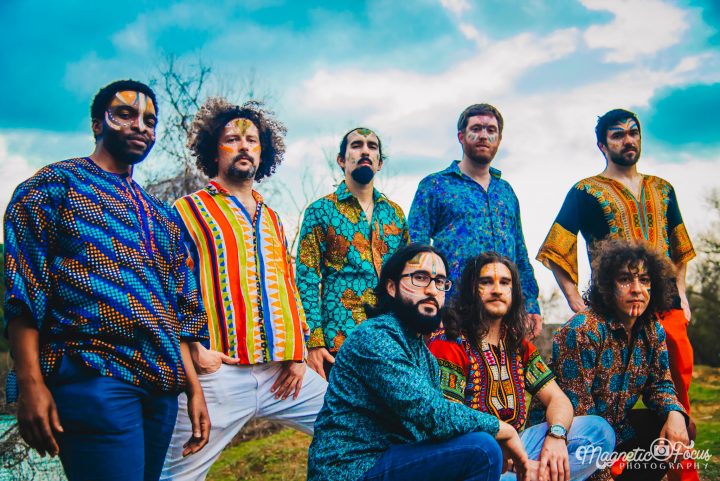 The second half of the EP doesn’t let down. “Merecumbe” is based on famous Colombian band leader, Pacho Galan’s Merecumbe beat. Nicholas Tozzo and Daniel Sanchez lay down the percussive backbone while the guitars weave a heavy funk patchwork. The theme is one of dancing your problems away no matter how heavy they are weighing you down. “El Miedo” is based on the Colombian Merengue (not to be confused with the Dominican Merengue). Jaime Ospina’s Gaita and Raymond Johnson’s Tenor sax share a mid-song duel. The lyrics touch on the dangers of letting fear drive your decisions. “No tengas miedo no, el miedo mata si” “Don’t be afraid, because fear kills.” Rounding out the release is “Sigue Pa’lante,” which is about pushing forward no matter the obstacles in the way.  It has become a battle cry for the band in these days of political uncertainty. No time to go backwards, only “Pa’lante!” The song is equal parts Afrobeat, gaita and rock. This is Colombian Funk… this is Superfónicos!

Don’t miss the chance to catch what NPR calls, “Lively, dynamic, colorful, full sound blending funk, cumbia, merengue…Commanding sound and presence with great vocals and harmonies,” when the scorching eight-piece Colombian Funk band tours to support their debut EP culminating in a monumental set at the upcoming Austin City Limits Music Festival on October 14th. Suelta as a song, as an EP, and as a mantra to “let go” rings stronger than ever in today’s times. Jaime strongly concludes, “Let love drive you, not fear.”