The Chapulín Colorado’s antenitas de vinil not only allowed the legendary Mexican superhero created by Roberto Gómez Bolaños Chespirito to detect the presence of the enemy but also to translate any language into Spanish…except that spoken and written by film critics. Well, as a film critic I have my very own antenitas de vinil and they became rather hyperactive as soon as the expository titles of Sicario: Day of the Soldado, the morally conflicted sequel to Denis Villeneuve’s Sicario, popped on screen: the human trafficking trade is now controlled by the Mexican drug cartels. While this is true, mis antenitas didn’t stop vibrating as Sicario author Taylor Sheridan laid down his sequel’s nightmare immigration scenario, a scenario that can only be considered an alt-right conspiratorial nut’s wet dream.

It’s night time in McAllen, Texas. A group of migrants are surrounded by border patrol officers; one runs away and after screaming “Allahu Akbar” blows himself up. Soon after, four Middle Eastern men walk into a Kansas City supermarket and blow themselves up, the camera lingering, at a distance, on a white woman and her child as she pleads with the terrorist to let them go before he presses the detonator. Days later, after a mission in Somalia, operative Matt Graver (Josh Brolin) is called into the Secretary of Defense’s (Matthew Modine) office where he is informed that, since the bombers were smuggled into the country by the Mexican cartels, the U.S. Government is about to add them to their terrorists list. Graver proposes to start a war between the cartels by kidnapping Isabela (the Peruvian-American actress Isabela Moner), the feisty teen daughter of Matamoros cartel kingpin Carlos Reyes —the man who ordered the execution of the family of lawyer turned assassin Alejandro (Benicio Del Toro)— and make it look like the work of one of their rivals.

Two thoughts immediately crossed my mind. First, this revenge-driven interventionist plot against the drug cartels is no different than the one that drove much of the far superior and more complex film adaptation of Tom Clancy’s Clear and Present Danger. That 1994 film starring Harrison Ford and directed by Phillip Noyce had a better grasp of the moral, ethical and political consequences of such actions than this sequel. Second, as unintended as its release date may be, the fact that Sicario: Day of the Soldado opens a couple of days before the Mexican presidential election (one of the bloodiest in its history) and, most importantly, at a time when undocumented children are being separated from their parents and housed in cages and tents under the auspices of this administration’s constitutionally questionable zero tolerance policy forces us to look at the film with a separate set of optics than those originally intended by the filmmakers. I suspect a significant number of prejudiced moviegoers (and they come in all colors, folks) will find in this film confirmation of their deepest fears and suspicions; others, like me, while appreciating its execution and craftsmanship will also lament that by the time Sheridan tackles the story’s moral quagmire (cynically setting up, in the process, another sequel), it’s too little too late. 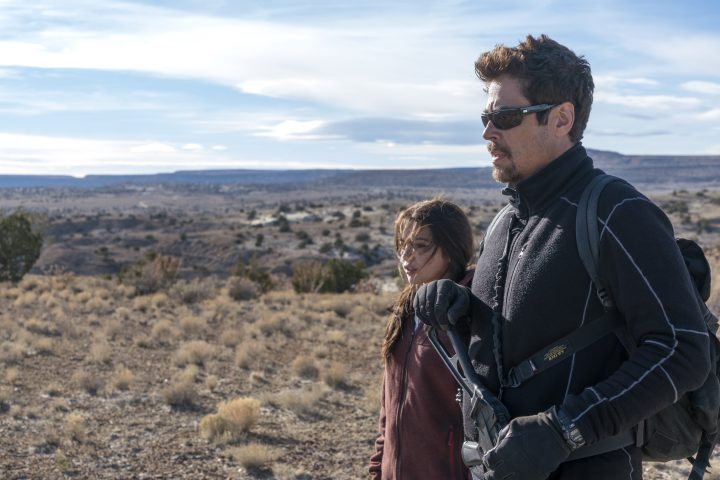 Graver calls on Alejandro to help with the operation. The kidnapping of the girl and her extraction to the U.S. goes according to plan; her return to Mexico not so much, as their convoy of Humvees is ambushed in the Mexican desert by a group of corrupt federales. Isabela escapes and Alejandro goes after her while Graver and his men go back to the base. Footage of the dead federales on Fox News (of all places) forces the U.S. government to pull the plug, ordering Graver to clean house…and that includes Alejandro and the girl. Alejandro has become far more protective to Isabela than he expected to be; he sees in her the young daughter killed by her father’s henchmen, another victim of the ruthless war he’s engaged in.

As in the first Sicario, Sheridan gives equal amount of time to a parallel and apparently unrelated story. In that film, it was a Mexican police officer, a decent family man, trapped in the web of Mexico’s narcoeconomy. Here, it’s Miguel (Elijah Rodríguez), a young Mexican-American from McAllen recruited by his cousin to work as a coyote for his boss Gallo (Manuel García Rulfo). Unfortunately, the smuggling of people across the border is a mere plot device whereas in the first film, Sheridan and Villeneuve took more time to consider how immigrants are just, in the words of one character in this sequel, “sheep.” Miguel’s story eventually connects with the main storyline, particularly in a gruesome desert scene where his fortitude and determination to enter this world are put to the test. 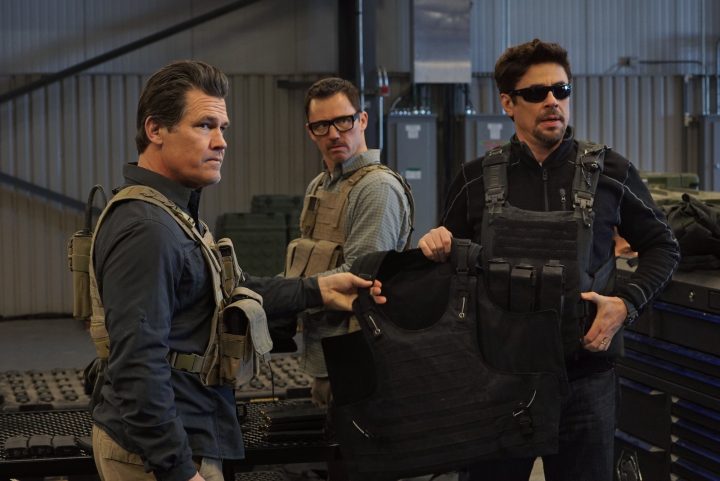 In Sicario, Villeneuve had three secret weapons in bringing Sheridan’s dark, violent script to life: Emily Blunt’s memorable performance as Kate, the FBI agent who serves as our witness, our conscience, our moral barometer; Roger Deakins’ stunning photography and Johan Johansson’s eerie, drone-like score which helped create the sense that we had not only entered no man’s land but hell on earth. Sicario: Day of the Soldado, on the other hand, is a modern revisionist Western, a Peckinpah wannabe, if you will. In its relentless focus on these tough men’s professionalism and its clean and brutal action choreography, Italian director Stefano Sollima (the TV series Gomorrah) evokes a different director named Mann than the one most critics have in mind: Michael, that is, and not Anthony, the director of such classic dark Westerns as The Naked Spur (1953) and The Man from Laramie (1955). Graver, Alejandro and their drug cartel counterparts are as efficient in their methods as the cops and robbers who shoot it out in the streets of LA in Michael Mann’s Heat or Tom Cruise’s hired assassin in Collateral. This is a world where “men gotta do what men gotta do” even if it involves asking a teen to shoot a man in cold blood in the middle of the desert. The only prominent female character, besides Isabela, is the CIA bureaucrat played by Catherine Keener in a thankless, underwritten role. This is a man’s world, where boys get to play with their toys (or, as a character says in the film, “Blue skies, long caliber weapons…love getting out of the office”), dead bodies left in their wake be damned.

Towards the end, Sheridan and Sollima acknowledge that there are no clear-cut, easy solutions to the actions instigated by Matt and his soldiers of fortune. The film ends in a grim and ambiguous note, one that focuses on both Brolin’s and Del Toro’s faces, on two separate locations and time frames: a glimmer of doubt flashes in their eyes as one flies off into the sunset after completing his mission and the other recruits a potential sicario. Their gazes serve as a counterpoint to Moner’s shell-shocked expression. For a girl that was all attitude and aggression when we first meet her beating the crap out of a classmate, her immersion in this world —which, one assumes, her father has done a good job sheltering her from— and the mark it leaves on her is one of the film’s most promising story arcs, one that is drowned out by the violence and the hackneyed plotting. Moner pulls off that journey with a maturity and emotional weight that eclipses Del Toro’s reliable moodiness and silences. Elijah Rodríguez is equally compelling as Manuel, a restless, angry soul, one that slowly figures out a way to fit in the underworld and make the most out of it.

But while these men at the service of the U.S. government and these children of the drug war are afforded some degree of nuance, Gallo and his ilk are just “bad hombres,” the kind that a certain leader of the free world likes to tweet about. They might as well be wearing tall black cowboy hats. It may not have been their original intention but with Sicario: Day of the Soldado Sheridan and Sollima have thrown a huge can of gasoline to the already burning anti-immigration fire.