Los Cafres begin their Sigo Caminando tour in Chicago this summer (June 27, to be exact) and there’s much reason to be excited! It’s been a minute since the band, headed by lead vox Guillermo Bonetto, last visited us for Ruido Fest in 2016. Sigo Caminando is the fourth single of the band’s last album Alas Canciones and the perfect name to this tour, which happens to be a continuation of their promotion of this very same album released two years ago. Although the material may not be brand, spanking new and hot off the presses, many of us in the states have yet to hear it performed live and much less at an intimate venue like House of Blues (thanks to Live Nation!). 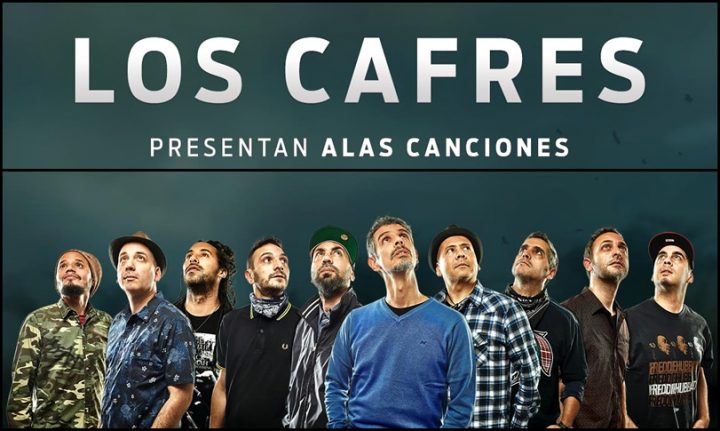 I was able to speak to Los Cafres’ bassist Gonzalo Albornoz, a long-standing member of the band who knows its inner workings as much as anyone could. On a long-distance call to Argentina, we were able to briefly discuss Los Cafres’ work and what we can expect on this tour.

Last time you visited us in Chicago it was for Ruido Fest 2016, close to when you released Alas Canciones. Often an artist’s time on stage is limited at festivals like this when compared to a concert. Should we expect something different or new on this tour?
There haven’t been new songs since Alas Canciones but the song list will be very different from when we last had the opportunity to play [at Ruido Fest]. In other words, there will be many songs that fans have not yet heard live. The show will be more encompassing and more complete than before. We have an extensive catalog of songs that we have compiled and from that list, we are choosing the songs that we will present at each show. And, also, a characteristic of this tour is that it will encompass music from all periods of Los Cafres’ career, so followers can enjoy songs from our past albums as well.

What can you tell us about Alas Canciones? Where was it recorded, what were some of influences and motivations behind this album?
The album was recorded at Circo Beat studios as well as a studio that belongs to Los Autenticos Decadentes. At Circo Beat, we recorded the percussion, bass, and keys. In other words, everything that is recorded live. Then at Los Autenticos Decadentes’ “Estudio de la Bardel” we arranged the choruses, guitars and some final touches by Guillermo Bonetto, whom obviously recorded the vocals and added some final details to the guitar sections.

The idea for this album came mainly from our way of working together. Our sessions and recording methods began by jamming together and improvising. More than anything it is a game of improvisation that lasts for hours. We make notes of what is working out, have a great time and, from that, is born the seeds of many future songs. Then comes the individual contribution of each member, working on their own and, before you know it, a mix resulting from what occurred at those jam sessions and Claudio and Guillermo’s lyrics all comes together.

We believe that it is the most creative way to work and take advantage of what comes to be. I can also tell you that we try not to limit ourselves. When composing we do not think this has to be or sound like “reggae roots”. That is just something that just comes about and happens naturally, but we are open to every influence, anything can happen and we adopt it without limitations.

Looking back at your work, Los Cafres has covered many artists. Some of these are from very different genres; artists like The Cure, Rolling Stones, Queen, Stevie Wonder. Why did you choose to cover those artists in particular at that time?
That was actually part of a special project that we did with a recording studio here at a radio station in Argentina and the idea of a live show that was to be recorded. The proposal was to break out of our shell and record covers of bands that we knew and liked and formed part of our history; artists that we grew up with. So, we made a list of songs from artists like those you mentioned: The Cure, Rolling Stones, Michael Jackson. Finally, what remained was to perform these songs in a way that represented us, in our own style. And that is how these songs were made.

It is something that we are very happy with and we learned a lot. More than anything, it served us well because we ventured into other musical genres to come up with these songs, break them down, see every instrument, and see how the songs were interpreted and composed. I think it really opened our minds, to break out of the genre we felt most comfortable with (reggae) and enter other musical genres, and look at them song by song, instrument by instrument, so that we could recreate it. The experience helped us a great deal and, once we were done, it had opened our minds.

Also looking back, the song “Tus Ojos” was recorded 15 years ago but is perhaps one of the songs that people most identify with Los Cafres, or at least one of the most, if not the most popular song you have recorded. What do you think has made this song stand the test of time?
I think there is a common element in all our songs that makes it possible for them to survive the passage of time. That is that every song has the power to make the listener identify with it. That it moves a fiber within them and reaches their heart. To feel identified but on an emotional level and not just superficially. Honestly, I think that is what makes a “music lover.” The listener incorporates the music into something I would call “the sound of their lives” and, well, achieving that, a song can last because as the person continues living they can remember a period in their life every time they hear that song.

I believe it is so because this is what happens to me as a music lover. There are bands from the 80’s and 90’s that touched me and I identify with and, to this day, I continue listening to them and I will for a very long time.

This question is about music and the socio-political climate that we live in today. Reggae has always been a genre that promotes, peace, love, and harmony. Do you believe music has an important role to play today with what is going on in our world and on our borders?
Yes, I believe music has a fundamental role to play. It has a role and almost unique opportunity. Every day the monopolies are becoming more concentrated and the possibility of a voice or opinion differing from those huge monopolies becomes less and less each time. When I talk about monopolies, I’m referring to the media which can end up establishing predetermined ideas or concepts, as if they were the only ones. And, through their lyrics, musicians can help create awareness and awaken people’s concerns or make them question, which I believe is very important. It is one of the few ways for human beings to have a voice, another discourse.

My last question may seem very generic or common but is there a message or something you would like to share with your fans here in Chicago or those that will see you on this tour?
Only that we are now celebrating 30 years together and it has taken us a long time to realize tours in the United States and be able to perform in places like Chicago and we are very happy and thankful because truthfully it is because of them, because of the people that will go to our concerts, that we have the possibility of expanding and touring over there. We like to think that amongst those that will go see us there are Latinos who are immigrants or children of immigrants and I like to think that we are like a reference point. Like a sibling that is going to visit them and that we bring with us some of those roots that may be far away for them. And it is part of a cultural invasion, where we are demonstrating what we are as Hispanics in, both culture and in being.

We look forward to seeing Los Cafres and hope you do too. They are a legendary band both in the Latin music and reggae scene and, with 30 years of music to entertain us, you can be certain to have a good time!