The multi-dimensional artist will showcase her music—an expression of World, Latin and
Neo-Soul—on January 18 at City Winery, 1200 W. Randolph. In addition to performing across
the country, Sandra recently opened and performed with gifted jazz, blues and soul singer
Lizz Wright, and has opened for Wynonna Judd at the House of Blues.

“I’m inspired by the good in humanity, by what moves us to work together to make meaningful change,” said Sandra. “Partnering with City Winery is an exciting way to unite people around an important cause while sharing my passion for music with fans and our great city.”

“The City Winery family is committed to sending over 100 team members to Puerto Rico to help the farming community following the devastation caused by Hurricane Maria; this event is another way for us to support local talent and fundraise for this effort,” said Dan Conroe, City Winery Chicago Marketing Director. “In addition to being a talented visual artist, Sandra is sharing her musical talent with our guests. We hope everyone will come out to enjoy an amazing time and show support.” 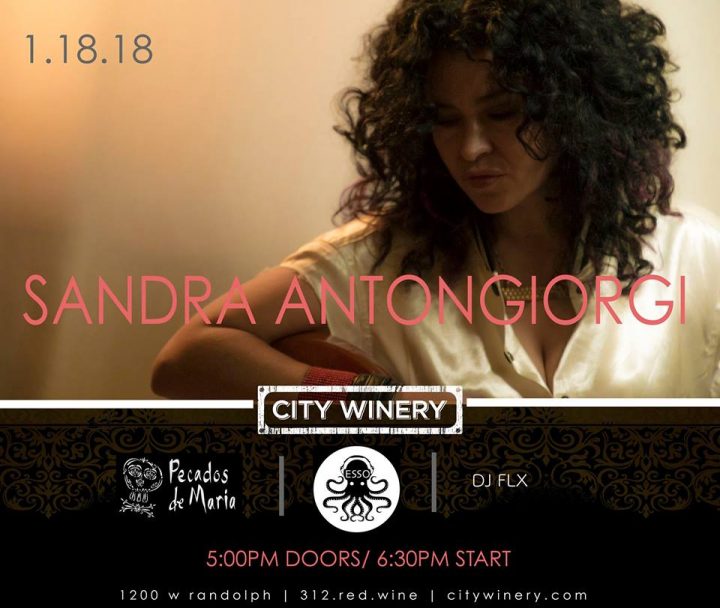 About Sandra Antongiorgi
An accomplished singer, songwriter and painter, Sandra’s music is influenced by traditional Caribbean sounds, Soul, R&B, Rumba and Gitano. Her art has been showcased in museums and exhibitions throughout Chicago, including the School of the Art Institute and the National Museum of Mexican Art. Sandra won the Chicago Readers’ “Best Mural of 2017” for “Weaving Cultures,” a mural collaboration with Sam Kirk, honoring underrepresented women, including a transgender Latina. Currently, she is recording in Chicago and New York to finalize the release of her EP.

About ESSO! AFROJAM FUNKBEAT
A dynamic multi-cultural musical ensemble performs a variety of roots-rock inspired dance music from the Americas, as well as the Caribbean Islands. Awarded “Best New Band,” and “Best World/International Music Act” by the Chicago Reader’s Poll in 2016. ESSO! released their sophomore studio album “Juntos” on all platforms to critical acclaim nationwide in 2017.

About Pecados de Maria
Pecados de Maria, a Chicago collaboration of diverse musicians puts a spin on traditional Latin Alternative music, creating a communion of Rock, Jazz and Latin fusion. Core members Marialen Magaña, Josemiguel Coutiño, Nic Byrd, and Agustin Santana have developed a bond through their love and the life that they share with their music.