Winter and holiday celebrations can be a reminder of the diversity of generational traditions and cultural customs we strive to emulate. From communal, to deeply personal, it seems that keeping certain ancestral rituals is key to the joie de vivre and the nurturing of familial legacy. In the case of 1840 Creative, traditions rooted in Jalisco and San Luis Potosi shine through in Chicago through the one-of-a-kind design and craftsmanship of entrepreneurs Yair Rodriguez and Elvis Ortega.

Gozamos visited the 1840 Studio in McKinley Park to find out more about the recurrence of tradition through the use of ultramodern design and also spoke to them about being chosen as part of Jack Daniels’ TURN07 which recognizes the many contributions that Latino businesses, like 1840, make to the world. 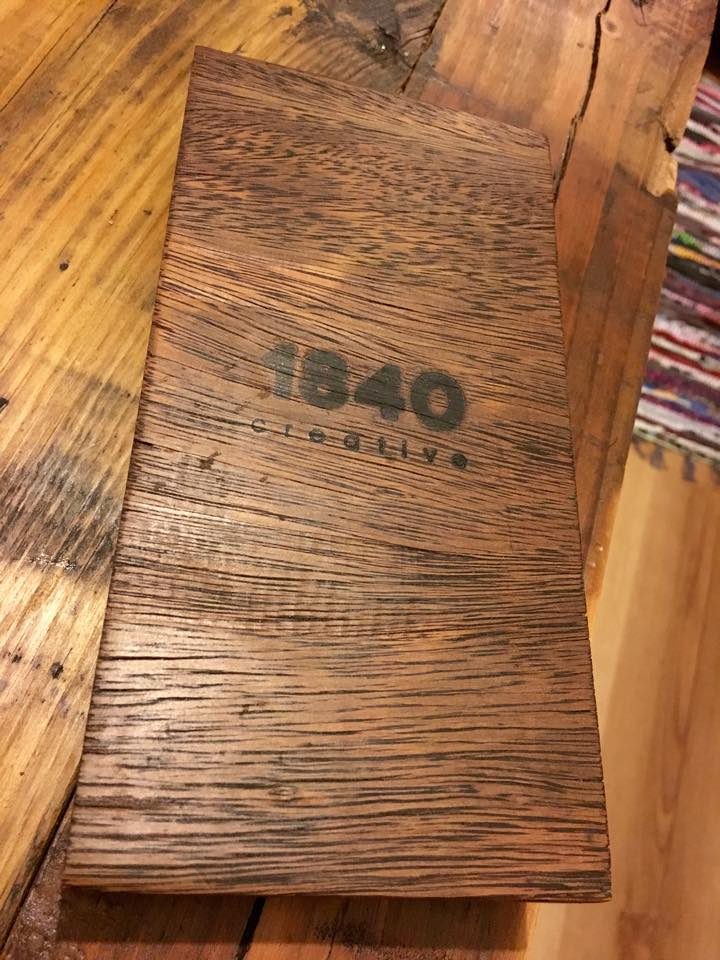 The word “tradition” is defined by Merriam-Webster as “an inherit, established, or customary pattern of thought, action, or behavior; the handing down of information, beliefs, and customs by word of mouth or by example from one generation without written instruction; cultural continuity in social attitudes, customs, and institutions; characteristic manner, method, or style.” – MW

Just before we arrive at the 1840 studio, we take a short tour through part of the massive Clock Tower Industrial building where it’s located. There are other studios here as we head to their space and each is dedicated to a specific art form or craft. You can find everything from custom embroiderers and upholsterers to a shop dedicated to books on Asia.

Arriving at 1840, we are led to the wood shop (where they cut, miter and sand) as well as the section of the shop where the work on metal is performed. The gentlemen explain that to be able to have both, in one location, “is a blessing.”

Between both ends of the studio there are assembly and finishing stations. The men are not shy when it comes to discussing the pride they have about making everything in their shop and always sourced locally and because of the type of work they do and the instruments they handle, safety is their number one priority. 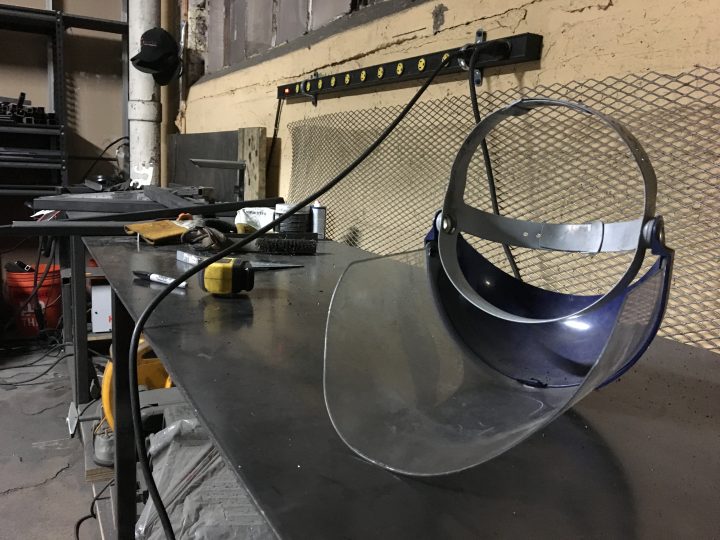 How did the idea to put this business together come about?

(Rodriguez): Elvis and I met at UIC. We graduated and now both have full-time careers. I happened to start working on some pieces after work to alleviate myself and de-stress and one day I happened to show Elvis. I told him I was doing this to keep my mind sane and he responded with, “I know how to weld!”

“We had a good time doing it and we started showing friends who started asking if we could make pieces for them. And then… the orders started coming in.”

Rodriguez’ interest for woodworking began in Cardenas, San Luis Potosi, where he would spend summers with his grandfather. Born in Mexico, his family moved to Chicago when he was five. Once he started attending school, his parents would fly him out to SLP to spend the entire summer there. They would then fly him back just a day before school started.

While in Mexico and with his grandfather, a carpenter who came from a line of carpenters, Rodriguez began to learn how to make small wooden objects. He would eventually learn to make toy muebles, houses, boats and bow and arrows. It was a natural progression to witness, he says, because he had access to all kinds of woodworking tools including many top rated circular saws at the time and of course, materials.

Ortega, whose family is originally from Jalisco, arrived in the Midwest in the mid 70s. Most of the men in his family worked in metal stamping plants and during his summer breaks he would spend time working with them. Women in his family also work in steel, so it’s a family way of living… a tradition.

On their website, the duo explains the name of their business – “1840 itself comes from a reference to the Industrial Revolution – a time when there was a transition between wood and steel. As artisans, Yair and Elvis always look for ways to incorporate one with the other to create a unique esthetic and style.”

Rodriguez says, “We first got started in an abandoned building… with no water and no heat and we shared such a small place for our work that we had to stop our individual projects in order for the other to continue. We did this for about eight months. The space was so small that when we had to stain a piece of furniture, all other work stopped in order for us to clear the space to make room for the process.”

They persevered and decided to make things official, working out a five-year plan. They had been putting together a portfolio with testimonials of work they had done as well as establishing their social presence online. There was a confident flow to the process, as they kept in mind, “If we’re going to do it, we’re going to do it right.”

Shortly after they went public, they were actually forced to find an industrial studio just to keep up with demand. Their growth continues at such a pace where they are once again looking to expand. 1840 Creative is now on its fourth expansion in just the first 18 months of their operation in this new location.

“Everything we have in our studio was bought with the funds we were paid from a job. Everything was built on the back of the business so we have been investing everything back into it. Basically, all of our work is here,” explains Rodriguez.

Well, we are very transparent about our scope and luckily, being here at Clock Tower, there are a lot of other business – upholsterers, cabinet makers, lampers – where we’ve been able to take on work that comes our way while collaborating with others. We help each other progress. We also collaborate a lot with other artists in the building.

That being said, we have said no to a client. If it’s something we don’t feel we can accomplish, we let them know. But, the few times its happened we’ve been able to refer them to someone else and it all works out. The main thing we want is to make sure that the client trusts us.

All we have is our reputation so if we feel that there’s something we can’t accomplish, we’d rather be upfront with the client about our scope and expectation. We can have all the great reviews in the world but all it takes is one bad experience to bring you down. 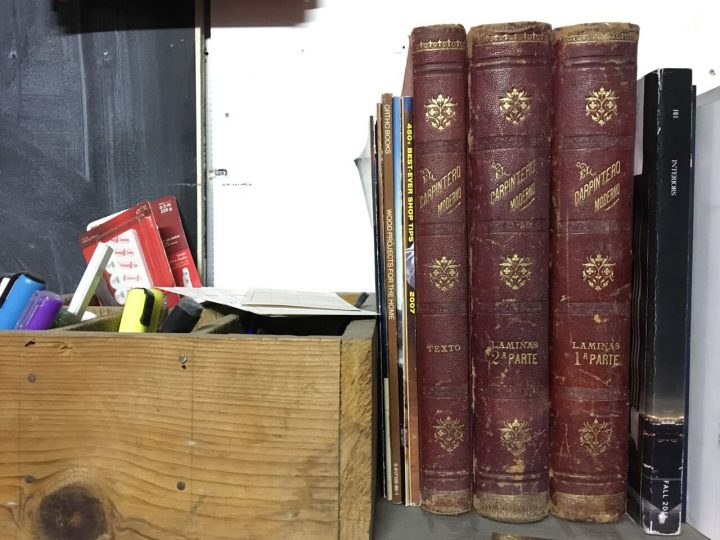 Rodriguez and Ortega are aware of the importance of keeping their family traditions alive and growing. They care enough about their craft that they’ve taken mentoring into account, allowing young, helpful apprentices to learn the process and join them in learning about their unique designs, all the while creating opportunities for leadership and entrepreneurship within their communities.

“With passion beyond the full-time careers they went to school for, 1840 Creative was born as a form of self-expression, a hub of creativity and a space for unique design in woodworking and metal.”

The company’s hard work and dedication continue to pay off as they were selected as part of TURN07, a program created by Jack Daniel’s which recognizes the contributions of Latino entrepreneurs.

“What happens when someone from a family of carpenters meets someone from a family of steelworkers? You get 1840 Creative, a passion project of Yair Rodriguez and Elvis Ortega. Launched as a way to fuse their passion for wood & steel into unique and custom handcrafted furniture, 1840 Creative hand-makes all of their pieces from local resources. Most products come with the origin story of the material used, making each piece an authentic original.

Having grown up in the United States with a traditional Mexican upbringing, both Yair and Elvis express a duality not commonly seen in today’s society. Both value education, hard work, and craftsmanship. The best way to describe them is as “artisans” because they build not only with their hands but with their minds and their hearts.” – Jack Daniel’s TURN07 Chicago

It’s great to see that the Latino innovators at 1840 Creative have found the formula that will ensure them continued success and growth.