Pixar’s Coco is the second digitally animated film centered around Día de los Muertos to be released in the last three years. It shares with the Guillermo del Toro-produced and Jorge Gutiérrez-directed The Book of Life a lead protagonist who loves music and wants to make a career out of it against his family’s wishes. Both imagine the afterlife as a colorful world full of extravagant characters and wild architecture. Both illustrate how our folk tales, our traditions, our culture, can serve as a source for multiple stories.

The Book of Life is far more mythical in scope, however, even when it’s telling a conventional story about two best friends in love with the same woman. Coco is far more poignant, more personal (even though four writers share credit for the script and original story, two of whom, Lee Unkrich and Adrian Molina, co-directed). It’s a story about family and memory, and a celebration of the richness and vibrancy and complexity of Mexico’s culture. In just 104 minutes, Unkrich and Molina manage to reference more than 150 years of that culture, from banda to norteño to punk, from Frida Kahlo choreographing big spectacles en el más allá to the Golden Age of Mexican Cinema, from cameos by Jorge Negrete, Cantinflas and Pedro Infante —at least their calaca versions— to the much feared chancla.

The movie opens with a delightful backstory told by our protagonist, 12-year-old Miguel Rivera (Anthony González), and animated with a digital rendition of papel cortado: Miguel’s great-great-grandmother Imelda fell in love with and married a musician who ran off to make a name for himself, leaving her alone with her daughter, Miguel’s great-grandmother and now rather senile matriarch Mamá Coco (Ana Ofelia Murguía). Imelda took on shoemaking as a career and became so good at it that she opened her own business which has been handed down to multiple generations of Riveras. She also banned music to ever be played at the Rivera household, a ban that stands to this day. “We are the only family in Mexico who hates music,” remarks Miguel who has musical dreams of his own.

Miguel wants to emulate Santa Cecilia’s hero: musical icon and star of dozens of classical Mexican films, Ernesto de la Cruz (Benjamin Bratt), who’s mantra “Seize your moment” is a Mexican callback to Chef Gusteau’s “Anyone can cook” in Pixar’s Ratatouille (2007). Determined to perform at the Plaza Mariachi in a Día de los Muertos competition even “if it kills me” and convinced that De la Cruz is his great-great-grandfather after finding a clue in an old photo, Miguel breaks into the singer’s mausoleum and ends up in the hereafter, the only living being among the dead. He also discovers that his best friend, a xoloitzcuintle dog named Dante, has crossed to the other side, vivito y coleando, as well. Miguel needs to return to the land of the living before sunrise and needs the blessing of a family member to make it back, preferably one who won’t object to his dreams. And so, with the help of Héctor (García Bernal), a calaca who also wants to make it back before he is forgotten and disappears, Miguel sets off to find De La Cruz and receive his blessing. 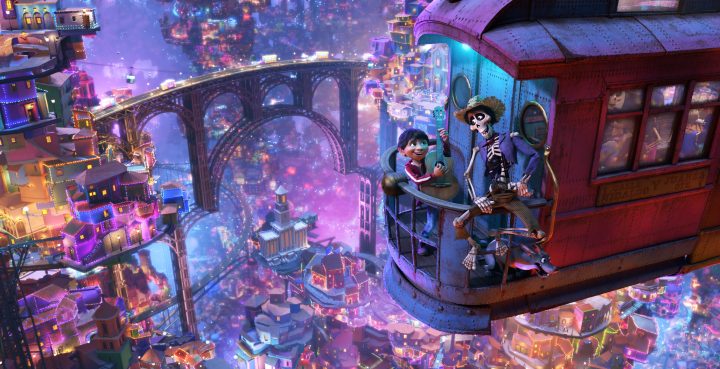 With its stratified skyscrapers and cable cars and neon bright alebrijes, this land of the dead is something to behold, a dreamscape that seems to have been partly inspired by the work of French graphic artist Moebius as distilled through a very Mexican lens. It’s a city that holds a mirror to its counterpart in the land of the living, where los olvidados, the dead who have been forgotten by family and friends, live on the fringes and the rich in far away mansions. It’s right here, on the fringes, where one of Coco’s most poignant scenes takes place as Héctor says goodbye to a friend in song, the friend’s skeletal body fading away just like Bing Bong’s did in Inside Out (2015). But here, the idea of memory, of preserving one’s legacy, of never forgetting where one came from, defines Miguel’s and an entire nation’s identity and spirit; they are center stage, while memory in Inside Out was seen as just one more component in a young girl’s growth. Any wonder, then that Coco is now the highest grossing film of all time in Mexico, surpassing even The Avengers?

I recently had the opportunity to talk briefly with co-director and co-writer Adrian Molina about the film’s attention to detail and, most importantly, how Disney’s misguided attempt to trademark el Día de los Muertos led to a film that celebrates Mexican culture at a time when it’s under attack by this country’s most regressive elements. The interview has been edited for clarity:

One could argue that Disney’s misguided attempt in trademarking el Día de los Muertos helped produce a film that feels tonally and culturally right. How did you get involved in it? How did you help right that ship?

I know, for a fact, having worked with [director] Lee [Unkrich] from very early on that that was a misunderstanding and an unfortunate mistake. We apologized for it because the intention from the very beginning was to present this film and the culture and its family with the respect it deserves. When that happened you could feel everyone’s heart break because it was completely not our intention. But what it did do was help us really set everyone’s radar on the fact that this is a special film, that this is a special tradition and it really needs to be treated with respect and attention to detail. That helped us to start the conversation, to invite cultural consultants [including cartoonist Lalo Alcaraz and playwright Octavio Solis, among others] to ask the really tough questions and keep our minds always on how do we make this film so that it represents all the beautiful things that we experienced, the place where my family comes from.

Translating these traditions to the big screen and to a different language can be very tricky, especially when you are dealing with the history and legacy of the Golden Age of Mexican Cinema. There is a certain earnestness to those films, a certain sincerity that if they don’t come out well in translation they be misinterpreted as corny. What were some of the challenges of translating to another culture, to another language, something that was so authentically Mexican as those films?

You have to embrace the sincerity; sometimes it steps into sentimentality and nostalgia. There is an aspect of that in the films from the Golden Age of Mexican Cinema, that’s their charm. They are aspirational and they are dramatic, sometimes maybe melodramatic, but that’s the joy and the feeling that you get when you watch them. They transport you to a different place. So to be able to create these moments, these film clips that suggest a repertoire of stories that touch on that nostalgia and touch your hearts, it really goes to what [Ernesto de la Cruz] means to the world and what he represents for Miguel, this kid who is an artist but doesn’t have someone to look up to, someone to help him forge his path. Allowing Ernesto de la Cruz to live in that idealized, nostalgic persona links it to the history of Mexican cinema but it’s really wonderful to give this little kid hope that he can use his art to do the same thing.

Did you screen any of these classic films to the animation team?

We turned them on to as many clips as we could. As we were researching Mama Imelda, we wanted to look at María Felix. Just get a sense for the physicality. There is something in a lot of these actors and actresses where they don’t have to say a word, they just walk into a room and command attention. As animators, the Pixar team is really great at breaking down what is it about the physicality, about the entrance that commands the attention and those were great touchstones.

One of the most effective characters, visually, the one that stood out in terms of that attention to detail, was great-grandmother Coco. Those wrinkles on her face, the close-up on her hands, they look so wrinkly and tactile.

So much of it comes from reference. As we were developing these characters, it’s someone’s job to model them and model their bodies and someone else’s job to design the outfits they wear and the texture of the skin down to the details of every little imperfection. So we looked at a lot of photo references of 90-year-olds. This is a film about many generations of one family and with the character of Mamá Coco, as the oldest living member of the Rivera family, there is a beauty and a celebration in showing that age and showing that experience and I think that’s why it’s so effective to see that on screen. It celebrates the beauty that comes with age and you see it in her every move, even the quiver of her hand. There is something very gentle and delicate and endearing about it.

How did you and Lee cast the voices for Coco?

We knew from the beginning that we wanted to have an all-Latino voice cast because so much of the subject matter is part of the Latino experience, the passing down of traditions within a multi-generational family. There is so much of the film that is bilingual, so that was a wonderful resource.  We didn’t want to rely on stereotypes, we didn’t want to rely on cliches and we wanted to create well-rounded, fleshed-out characters, roles that spoke to the people that we know in life. I love that these are roles that these actors can sink their teeth into. Edward James Olmos, who plays Chicharron, is in one scene in the film but it’s a really beautiful and important scene and we were just with him the other weekend and he mentioned that this role was one of the highlights of his career and he’s had an illustrious career. But it’s because it says so much about the Mexican experience, it says so much about how we feel about family, how we feel about our traditions and for each of these actors to be able to bring their lives and their pride into this story, I think makes the story work.

Coco was released in Mexico days before the actual Día de los Muertos celebration, but here in the United States, it’s being released Thanksgiving Day weekend. From your perspective, what’s the benefit of opening this on a holiday weekend?

I look at it from the standpoint of opening on a weekend where people will be with their families. I hope people go home and they break out their iPhones and hit record and start asking about what their parents were like when they were kids, or what their grandparents were like when they were kids. For that reason, I think Thanksgiving is the perfect time because people will be with families and have this opportunity to be able to say thank you for all the sacrifices that you have made. That is why I am excited about the timing of the release here in the United States.