Sofia Coppola is an acquired taste… which is a nice way of saying that when it comes to her work, I run more cold than hot. Lost in Translation (2003), her best film so far, is a masterpiece of ennui and alienation driven by Bill Murray’s impeccably droll comedic timing and a one-of-a-kind plant-your-flag performance from Scarlett Johansson. I admire the craftsmanship of both The Virgin Suicides (1999) and Marie Antoinette (2006), both featuring a stellar Kirsten Dunst. However, Somewhere (2010) bored me out of my wits and I didn’t care much for The Bling Ring (2013). So I approached her new film The Beguiled with some apprehension, especially since the 1966 novel by Thomas Cullinan had already been adapted to the big screen by Albert Maltz and Irene Kemp. But while that 1971 Don Siegel-directed Clint Eastwood-starring film wears its steamy, sweaty, lurid Southern Gothic roots on its sleeve, Coppola’s adaptation is more intimate, more minimalist; not so much a remake of the Siegel film but a more personal interpretation of the novel. While Siegel’s version is firmly rooted in the American Civil War, in Coppola’s the war is a mere backdrop. Gun and cannon fire may be heard in the distance and Confederate soldiers may be marching by but the story could well have taken place during the War for Independence or in Nazi-occupied France.

Coppola has kept the story’s basic elements intact. It’s 1864 Virginia and a young girl, Amy (Oona Laurence), is picking up mushrooms in the misty woods near the Farnsworth Seminary for Young Ladies when she stumbles upon a wounded Union soldier. Amy foolishly takes him to the Seminary, a beautiful mansion now inhabited by four fellow students of different ages, its founder Martha Farnsworth (Nicole Kidman) and a teacher, Edwina Morrow (Kirsten Dunst) after the rest of the students, teachers and slaves left, escaping the war. Christian charity and Southern hospitality overrule duty towards the Confederate cause and concerns they have about harboring the enemy. The soldier, Corporal John McBurney (Colin Farrell) is an Irish immigrant who received $200 for his services in the Army. The other four students —Jane (Angourie Rice), Marie (Addison Riecke), Emily (Emma Howard), and the sneaky and uninhibited Alicia (Elle Fanning)— spend their days learning French and manners from Edwina and tending to the house. 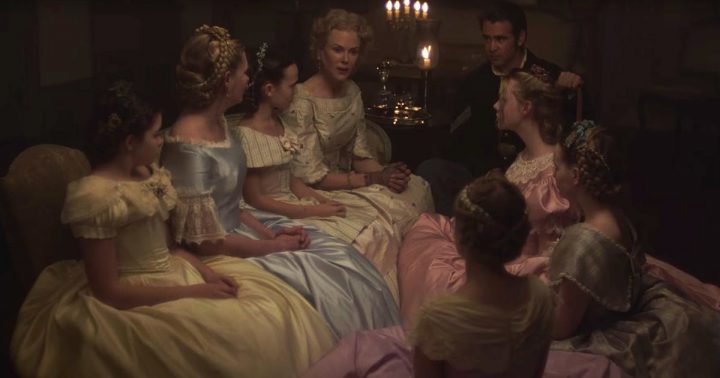 Coppola depicts their daily routine, as McBurney recovers from his wound, with a langueur that borders on the soporific, the proceedings bathed in pallid, hazy sunlight. The seminary feels out of place and time, isolated, a prison for these ladies. You feel that the arrival of this wounded soldier is the most exciting thing to have happened to them in months. McBurney poses no danger to these ladies while he is recovering in his locked room. But the pace picks up once he is back on his feet and volunteers his services around the house, while subtly manipulating and toying with the wishes and desires of Miss Martha, Edwina and Alicia until he is caught in fragrante by Edwina in Alicia’s room late one night. From here on, the film follows Siegel’s original sans the hysteria and the grand guignol; even the brutally cruel ending of the original is underplayed by Coppola. The violence is relatively bloodless, more verbal and psychological than physical as these women belatedly realize that they let the Big Bad Wolf into their abode.

Siegel’s take on the original source material is a product of its time, one that has not aged one bit. It is a film that believes in the power of suggestion (a scene involving an amputation is masterful in letting our imagination piece together what’s happening through the use of shadows, sound effects, reaction shots and very brief cuts to the cutting utensils), that daringly visualizes the power of lies, and that even tackles incest, teen lust and pedophilia. As stated before, the Civil War is front and center to the story, the presence of its slave/servant Hallie a constant reminder of what this war is about. Coppola not only eliminates this character from her adaptation, but her take is less beholden to history. If Siegel’s film is full of rich, earthy colors, Coppola’s takes place in a world full of faded pastels, of closed curtains that block the sunlight, of candlelight, that finally opens up and lets the sun in once McBurney recovers and the girls’ passion blooms in full force.

As in The Virgin Suicides, Lost in Translation and Marie Antoinette, Coppola is far more interested on the impact isolation has in these women’s lives, whether that isolation is the product of a truly conservative upbringing, of being a stranger in a strange land or is a by-product of power and privilege. In The Beguiled that isolation leads to them to confront their own desires and to a radical course of action. The film ends in a portrait-like tableau as these women stand and sit in the porch, ready to embrace their solitary status quo and the routines that come with it.

The Beguiled marks Kirsten Dunst’s third full collaboration with Coppola (I am not including her cameo on The Bling Ring) and even though critics have fallen head over heels with Nicole Kidman’s superb performance, Dunst’s is far more restrained and interesting. A picture perfect portrait of repression, she stands still, her hands and arms moving with the grace of an orchestra conductor, her lips sealed in a permanent rictus. When she finally lets her emotions through in two key scenes in the film’s final act, the impact is as devastating as the cannon fire heard in the distance. She is the one character who dreams of a way out but is, in the end, forced to tamp down those emotions and to adopt that prim and proper demeanor she has been tasked to instill in her young students.

But even with all this frustrated and repressed sexuality brewing under the surface, Coppola frustratingly and deliberately keeps us at arm’s length. No matter how much we appreciate her technique, her The Beguiled never fully invites us in. It’s as if Coppola had placed an invisible barrier between this world and us, as if we were matching a museum piece behind a security barrier, one that we can watch and admire from a safe distance without any emotional involvement.