(Note: This article along with Our Neighbor are being published to highlight veterans of wars in these lands as well as other lands. Please join us at this Memorial Day event as we remember and stand together.)

In the week after Thanksgiving, my cousin Reggie and I traveled to the Standing Rock Indian Reservation in North Dakota with our friends from Iraq Veterans Against the War (IVAW), to be in solidarity with the Indigenous protectors camped there against the Dakota Access pipeline. There were to be over 2,000 US military veterans that weekend, joining with hundreds of other tribes to stand against the North Dakota governor-ordered evacuation of the camps that Monday, December 5th.

We arrived the weekend prior at the Oceti Sakowin Camp, and were graciously given a military tent to stay in, set up by the Cheyenne River Sioux Nation. A group of veterans with IVAW went to a welcome ceremony by the Sioux Nation, and we stayed to walk around the camp and pay our respects to the Sacred Fire. The fire burns day and night, without end, and is kept by elders. There was hot tea and coffee available for all, and many prayers and songs shared. In the morning, the women led a Water Ceremony from the fire to the Cannonball River, which was beautiful.

When our friends and brothers — Oliver, Aaron Hughes, Matt Howard, and many others — returned from the welcome ceremony and from the medic camp, we took a walk to the Sacred Fire and were invited to a sacred Grass Dance. It was so special to be in Standing Rock: lands where the Sioux people were forced to reside in after so many wars with the US, who broke treaty after treaty with the sovereign nation of the Sioux; lands where one of their greatest leaders, Sitting Bull, was murdered; where American Indian Movement leader Russell Means was shot in the back; and where now the 7 bands of the Great Sioux Nation were coming together for the first time in many years — again for the protection of the earth and their rights as Indigenous peoples. It was a historic moment to be a part of, in which hundreds of First Nations peoples from all over the continent and world came together to make a stand.

It was an honor to be there. We were privileged to be among over 10,000 people that week, along with over 4,000 vets. There were so many things we were able to be a part of. We were there on December 5th, when the veterans made a ceremonial apology to the Sioux nation, and we were present the day before at the Sacred Fire when it was announced that the US Army Corps of Engineers had denied the Dakota Access pipeline the permit to drill under the Missouri River.

I remember at the veteran’s apology, the elder Faith Spotted Eagle spoke about her father, a WWII veteran that lived with PTSD. He had given instructions for all of his children to not enter into military service, but instead to fight the wars that we have here, for justice and peace, on occupied First Nations lands. The elder continued to list off many of the struggles that they have fought for hundreds of years, among them the genocidal wars and polices against them by the US government, the forced imprisonment of children in boarding schools, the forced sterilization of Indigenous women, etc. I remember Faith Spotted Eagle saying that now both veterans are united, the ones fighting wars outside and the ones fighting wars against oppression here: “The intersects of your PTSD intersects perfectly with our PTSD.”

I also remember a story that the military vets shared about the welcoming ceremony, in which they were given instructions by the elders that there was to be no direct actions by the vets, that instead they were being asked to pray, to heal, to be a presence of peace. And one of the vets approached the elders then, shaking, saying that he was so happy that there were not going to be any taking of the hills, and that he could now focus on spending his time helping around the camp and healing.

Veterans have a right to heal. We as citizens of this nation and world have a right to live without war, to live in peace. Indigenous peoples have a right to self-determination, sovereignty, lands, etc. — a true peace. Instead what we have is a system that operates as a military industrial complex, for lands, riches, and power. This isn’t peace, it is violence. And when the Sioux people put a call out for the Seven Council Fires to come together, many all over the earth came to join them — on a path towards building a true peace and to end the violence of our systems. We have indeed a long way to go.

And as my friend and brother, Barry Romo of Vietnam Veterans Against the War (VVAW) has said:

“Struggling for freedom is liberating in and of itself. It gives life an existence that you can’t have in any other way, it allows you to meet people who are only of the highest caliber… people that you can trust with your lives, people you can trust with your sanity, people you can trust with your friendship. The movement for liberation is a movement that empowers you and other people as you fight for other people to be empowered… when you tell the truth, when you cut through the lies, when you end the culture that military service is what makes you a man or a woman, as opposed to political action — to fight for justice, to fight for an end to violence, that is the real legacy that we have to leave behind.”

So, let us as military vets and vets of the struggles for justice and peace here continue to unite, to work together, to be one, to heal together. We can continue to tell the truth, to deploy for righteous causes and movements here and elsewhere. And yes, sometimes we are prophets of a future that is not our own, sometimes we are builders, planters, of spaces and fields for our children and the next generations. However, as we already know, it is in the struggle that we have our freedom, that our life has purpose, where we build true kinship, and model a beloved community in the here and now, that will more and more fully be in the days to come. 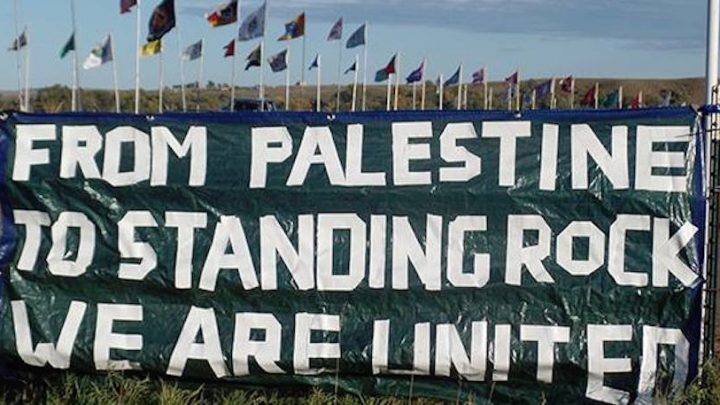 *This article originally appeared in The Veteran, the newspaper of Vietnam Veterans Against the War, Inc: http://www.vvaw.org/veteran/article/?id=3427