“Chicano music, Chicano rock in general, does not exist without Black music. From Lalo, to Ritchie Valens to Los Lobos to us, there’s a line of Black Music and Black expression in what we do. It’s always been there, and there’s been moments of it being really present, but we consciously chose to intentionally bring it to the forefront”, says Quetzal Flores, Chicanx artivist musician, founder of renowned East L.A. band Quetzal.

Flores is describing the process that fueled the band to create their new album, The Eternal Getdown, out now via Smithsonian Folkways as part of their Tradiciones/Traditions series. He founded the band in 1992, and over the last two decades, Quetzal has advanced a unique hybrid sound that won them a 2012 Grammy for Best Rock, Urban or Alternative Latin Album for their album Imaginaries.

With the The Eternal Getdown, Flores explains that the goal was to have listeners recognize the ancestral and historical relationships between all the influences that Quetzal draws from – including but not limited to traditional son jarocho, Cuban batá, funk, Chicano rock, soul, and rhythm and blues. The process came about organically, but intentionally: “When we first went to the studio, it was just us jamming, no songs. The goal was for everyone to firmly hold onto their traditions – where they come from and what they studied. Previously, we had a tendency to bend to each other, and in this instance what we did was not bend, but let the rhythms and sounds find each other organically in the space.” 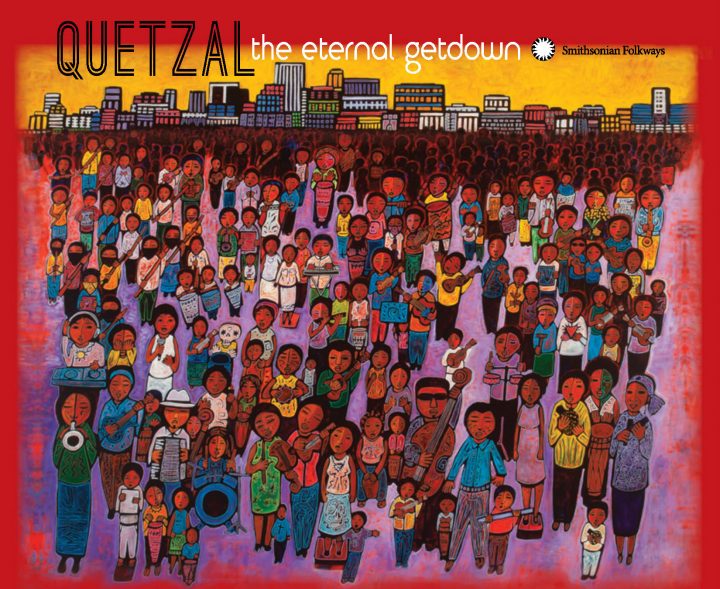 The motivation behind the album was the band’s way of saying, ‘Black Lives Matter’, says Flores, “…and agreeing with that, and agreeing that for centuries now, Black people have given so much to various cultures of the United States and this is us really acknowledging that piece of Chicano music.” He mentions specifically in this regards the contribution to The Eternal Getdown by drummer Evan Greer and keyboard/vocalist Quincy McCrary as well as featured guest  Aloe Blacc, renowned Hip Hop-Neo Soul musician born to Panamanian immigrants.

Flores adds that in the course of their twenty-plus years as a band, Quetzal has always drawn strength and inspiration from the spirit of the son jarocho, a music born in Veracruz in the 17th to 18th Century in the forced collision of African and Indigenous cultures under the Spanish colony. As Flores describes it, son jarocho is the “sonic articulation” of rebellion: “It has to do with colonization and people being removed forcibly from their lands and their livelihood, and ways in which they needed to continue to exercise their humanity. And in exercising humanity, finding agency and power in that, and then utilizing that to rise up and rebel.”

Quetzal has always worked according to the philosophy that art and culture are an essential piece to the movement, he declares, because “The process has embedded codes and ways of being and doing and organizing and creating that are nonlinear and that [in and of itself] affords social justice movements a different look at what this could be and how we could respond.

It’s all a part of a way to develop community off the stage, says Flores, and in the process where the community comes together and composes a song together, the imagination is incited in so many ways that a collective, regenerative vision of society can be formed.

Quetzal will bring their innovative mingling of Chicanx rock, blues funk and Mexican folk sounds to Mole de Mayo on May 27, but don’t forget to check the fabulous offerings at this classic Pilsen fest all 2 days, from May 26-28.