Our family moved to the US from Mexico in the 1970’s. Our paternal grandfather, Ignacio Corral, had worked all over the country for about 20 years and had decided to move his family to the Aurora, Illinois area. Our parents lived in the house next to our grandparents, with one fence joining the two yards, and we always had guests and visitors.

One day, around 1984, Dr. Charles Smith moved into the house across the street. He didn’t have any water or electricity, so my grandfather took the water hose across to Dr. Smith and said he could have water. He then brought an extension cord across and said he could use them for however long he needs. My grandfather didn’t know English and Dr. Smith didn’t know Spanish, but they both understood each other just fine. Neither of them have any volume control, so everyday they’d see each other and yell hello to each other across the way, and our grandmother Margarita would send us over with plates of food and hot sauce, Dr. Smith’s favorite.

Dr. Smith spent his days building things; we didn’t really know what or how, but he let us know that whatever stones we had or wood from building or tearing down things, he would take it. One day we took apart the whole sidewalk, and Dr. Smith happily used the concrete pieces to build things at his home. We realized that he was making art. He made his home a masterpiece, but it was more, a message.

His whole yard was art, the site of what would be known as the African-American Heritage Museum and the Black Veterans Archive. His mother taught him how to make art, and he spent hours building, crafting, and teaching. All day he had his signature tobacco pipe with him, his hat, and his laugh. We’d hear him teaching everyone who would stop to see what it was he was doing, from the kids from the neighborhood, to people who passed by. Then we started seeing people from out of town come, whole buses. Dr. Smith was always happy to teach people and share his message about each piece he created, works of art from what others considered garbage or disposable materials. He spoke of the people our society and country treated the same way, he spoke of his people, and his veteran brothers and sisters. And his pieces and stories illuminated them to their true identity as majestic greatness. My favorite one is the soldier he put on top of his house, with an American flag. It was his best friend, his Sarge, killed in Vietnam. He always took care of that piece with great tenderness.

One day a couple of neighbors came to knock on our door. They had a petition that they said we needed to sign. It was to kick Dr. Smith out of the neighborhood, because they thought he was crazy and a disturbance. Our grandfather told them that our neighborhood was filled with violence, day and night, and the neighbors who lived in that house before Dr. Smith caused hell every day, yet not once did they come over then. And now, when this man of peace and goodness comes in, they want to kick him out? He kicked them out, and told them never to come back. And that’s pretty much how it continued to go. Some people in the city and neighborhood really liked Dr. Smith and his work, and others didn’t. But we? We were his neighbors.

He came to our parties, had a great time, we went to his house to visit him and watch him work. We heard him teach countless visitors. He sent over food, and when we brought him a plate he always laughed and spoke highly of my grandparents. He always prayed and said that our house was always a full house, and it made him happy. He moved back home to Louisiana in the early 2000s, after a museum came and bought many of his works of art. He went and did the same there, turning other people’s garbage and disposable materials into art. Teaching the children in the neighborhoods—who long were considered disposable human beings—that they are indeed magic.

I still call Dr. Smith today, to see how he’s doing, and he calls me. Sometimes he’ll visit and have a group of influential people there at the site of his original home and site in Aurora. And when I walk over to say hello and give him a hug, people ask me who I am and how do I know Dr. Smith? And I look at him, smile, and say to them, “he is our neighbor.” 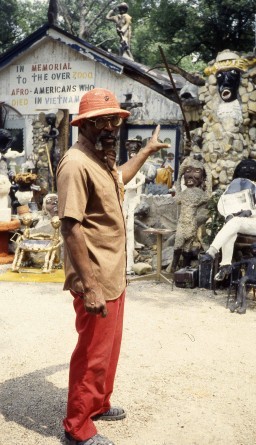 *This article originally appeared in The Veteran, the newspaper of Vietnam Veterans Against the War, Inc: http://www.vvaw.org/veteran/article/?id=3419