It’s that magical time of the year again, baseball fans: opening week. The 2017 season finds more uncharted waters for Cub fans, as the Lovable Losers have transformed into World Series Champions and have begun their title defense this week. No more, “Wait till next year,” because that phrase came and went while talk has turned to, dare we print, repeat? But before we shift gears to talk of this season’s anticipation and aspirations, let’s take one more look back at the celebration through the paintings of Major League Baseball sanctioned artist, Opie Otterstad, and his Cubs Moment of Victory exhibition, which opens Saturday, April 8th and runs through April 30th at Narrative Gallery inside Water Tower Place.

“Baseball is an allegorical sport.”

Opie Otterstad “tells stories about baseball with paint.” It may sound simple to the casual fan, but let’s be honest: Chicago Cub fans are anything but, being on the receiving end of the longest running joke in professional sports is no easy task. Cub fans have endured a century+ of agony, defeat, talks of curse after curse, all the while studying and enjoying the game to pass the tradition from generation to generation. Opie’s own stepfather grew up in Wrigleyville and is the biggest fan of anyone he’s ever known, so you can imagine the joy deep in his soul when he receives a signed ball from his world champs while he’s on the mend (get well soon). Every Chicagoan has a father or grandfather or stepfather or grandmother or great aunt or neighbor or someone down their family lineage who thought they’d die before witnessing a World Series Champion Cubs team. That’s why this exhibition sets itself apart from all others, with Opie saying that the only team that came close to the personal level of championship giddiness would be the 2004 Boston Red Sox, who featured a pitcher by the name of Josh Beckett, who learned the importance of buying commemorative art from Hall of Famer Ivan “Pudge” Rodriguez after they won it all in the ill-fated (for Cub fans) 2003 season. Beckett then schooled 2004 teammate Jon Lester, who has now passed the knowledge to teammate “The Professor” Kyle Hendricks. That’s the “weird continuity in the clubhouse” that Opie alludes to as an astute observation of the dealings of art in the sports world. I ask him how players react to the art. “They love it.”

Opie loves to talk, something he attributes to his long family line of Lutheran ministers, and he fancies himself an allegorical storyteller, and in the 2016 Cubs, he found not only the story of his lifetime but the lifetime of 3-4 generations: “the story that I tell goes into the stories that they tell.”

Conversations and debates over the purity of baseball, what countries play it best, unwritten rules, etc. rage on while Opie Otterstad “tells stories, histories, and experiences of being a fan. There’s a more complete story I can tell through study.” 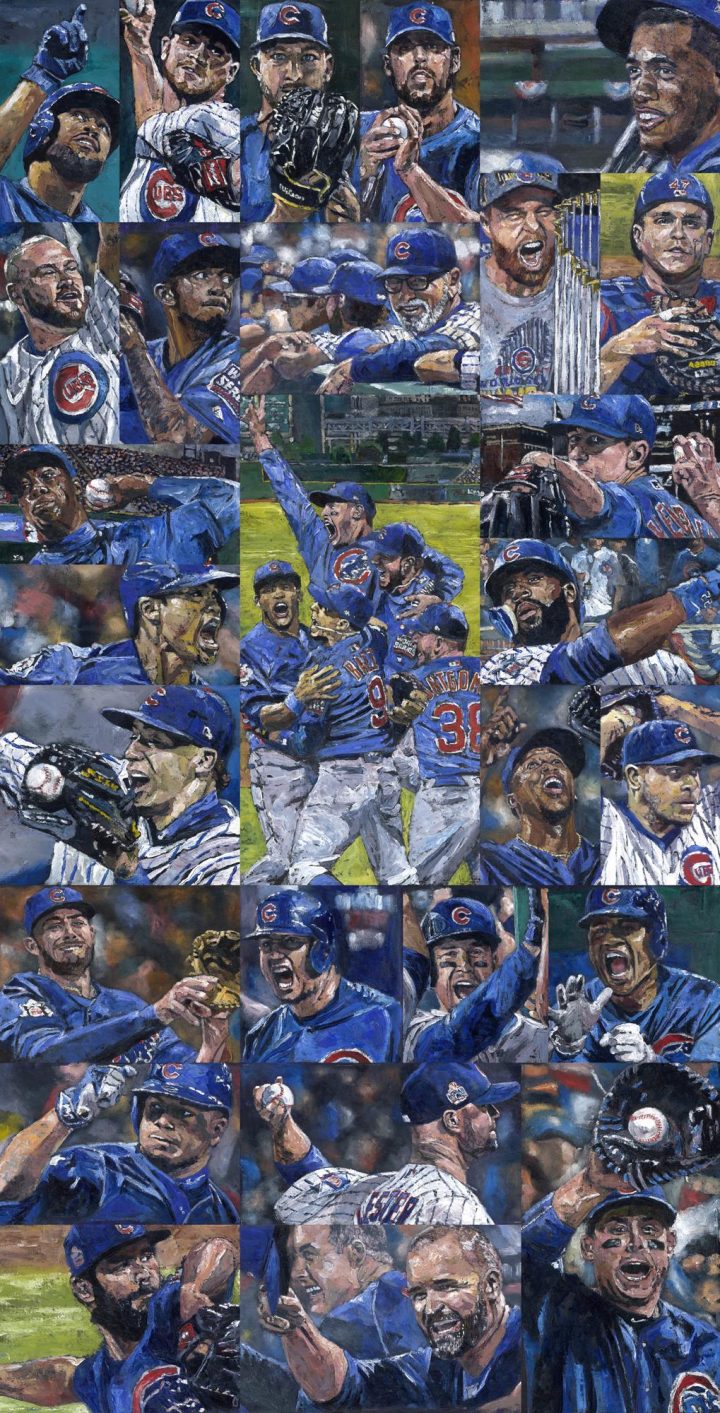 Opie Otterstad takes proper time to get to know his subjects as friends, something attributed to his decision to “live the life of an artist whose era has passed.” In doing so, Opie has developed personal relationships with players, and those relationships now outweigh the teams he roots for. Imagine that, baseball aficionados: your job is to paint the World Series Champions annually, unveiling the works at spring training, befriending baseball players, and then interpreting their greatest moment of celebration through the craft that you’ve spent your life mastering. I ask him if he’s aware of the life he’s living. His response is as pure as it is appreciative: “It’s the best job in the whole world.” Appreciators of sports and art would be hard-pressed to find argument in that statement. “I’m basically Santa Claus, but I work 365 days a year.” 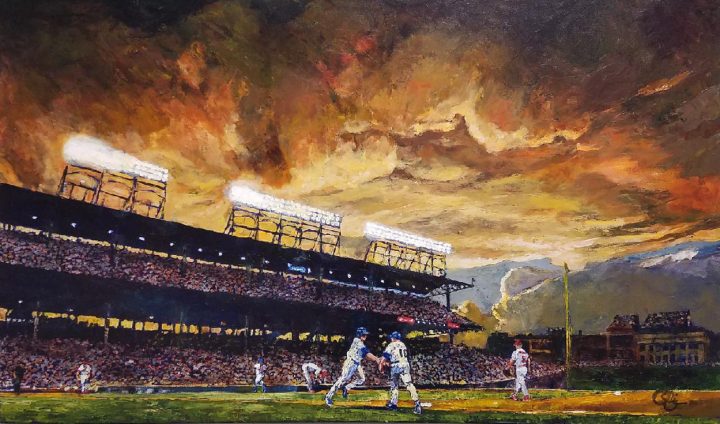 “The zeitgeist of college art is to out-macabre your neighbor.”

Opie has been an artist since age 3, and baseball is something he fell in love with at the age of 7, something he describes as a full-time love affair. He started painting baseball in college after a professor told him that the work he was producing wasn’t him and that the “imagined inner-torture doesn’t say you or feel like you.” Count on a good college professor to point a painter in the right direction, because Opie took that advice and ran with it. He played basketball and was described as a happy guy in college, so painting sports was a natural career path. He drew baseball cards and loved it: “1/1,000 of unfiltered emotion, a brief moment in time in a position otherwise unmaintainable.”

With a Masters degree in Psychology to go with his studio art degree from St. Olaf College in Minnesota, the nature of human experiences and emotion mixed with fine art blended with the celebration of success would be a path paved by a painter who prefers the palette knife to a brush (Opie does sign his paintings with a brush though). When I ask him if that college professor hadn’t called him out and pushed him to be himself, what he’d be doing instead, Opie pontificates that he’d maybe be an antique dealer or an art dealer.

Going against the grain of the aforementioned zeitgeist of college art, the dealers are now the ones turning Opie Otterstads into important items for fans, collectors, and players…and some of those people are all three. What a life! 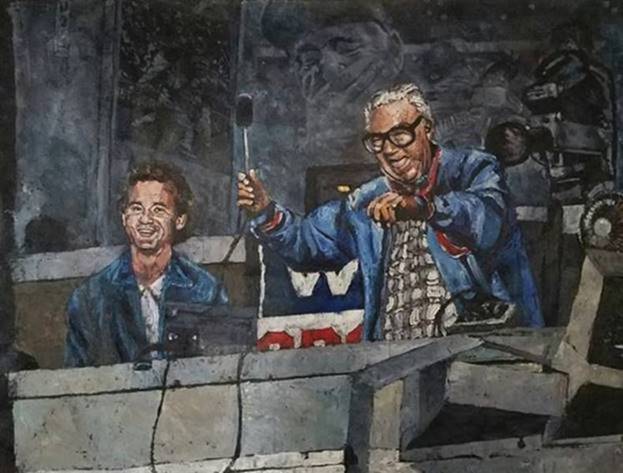