[Full disclosure – the singer of The Devilocks, A Misfits Tribute Band – is not only my best friend but we also work together on Enchufate and other projects.]

At some point in my life, when it came to music, I came to really appreciate the music of the Misfits. For those of you who may not know, the Misfits are a horror punk band that started in New Jersey in 1977. Their name comes from Marilyn Monroe’s last movie, The Misfits (1961), and their music is self-described as “aggressive, confrontational and dangerous with violent lyrics as seen through the eyes of a monster, coupled with timeless vocal melodies bred from 1950’s rock and roll.” You can read more about them here.

I became fascinated with the Misfits because my best friend, Hector Ivan Garcia, was learning the lyrics so he had their music on repeat in his car, on cassette mind you, and played them every time we went somewhere. Um, we went many places together and so I heard the songs over and over and over until I myself had memorized them. Of course I didn’t realize how much they had penetrated my brain until he performed one of their first gigs as The Devilocks and I caught myself mouthing along to almost every song. (Side note: The BFF suggested I use the name Angelfuk as my DJ name when I first began to play music back in 2005. It’s a Misfits songs. Take a listen. People are always shocked by it. Good!)

It has now been about 10 years since Hector Ivan Garcia and his crew of misfits – currently H. Skelter on vocals, Carlos Tovar “Johnny Bones” on guitar, Jose Calvo “The Hound o’Hell” on bass and Oscar Torres “Zombie O.” on drums – decided to take on the role of musical fiends and pay tribute to The Misfits as The Devilocks, A Misfits Tribute band. Because it’s been such a long time dedicated to this project, and because they have a stellar gig tomorrow at The Wire, I decided to reach out and ask him about this project and how it all got started.

Why did you decide to start a Misfits tribute/cover band – how do you know their music and what does their music do for you?

The way I remember it, we were all members of different bands who had rehearsal space in a complex over in the Lawndale Neighborhood. We had all known each other for many years. Even though we all played different genres, one band we all liked was… you guessed it… Ramones. Personally, as vocalist, I could never sing with Joey’s nasally accuracy, but I could belt out a mean WHOOOOOOOAHH! Because we all loved MISFITS as well, they went for it. Quiet honestly, I get possessed some times. It’s true. I never heard of that happening when the spirit of a person who is still alive (Danzig) can jump into you, but man o’ man. Just watch me during a performance. I often wonder if my eye balls don’t roll back in my head during the set.

Are all the band members Latino?
Yep. We are all Latinos (or Latinx or Kleenex or what ever they want to call us). At one point a promoter noticed we were a bunch of Mexicans doing MISFITS and suggested we be called LOS MISFITOS. We said nah.

Why do you think there is a fascination by Latinos with certain artists (besides Misfits, Morrissey, for example)?
I feel like the iconography is transcendent. If you listen to punk/rock/metal and you’ve never heard of or at least seen the Misfits’ Crimson Ghost logo, I don’t know where you’ve been the last 30 years. Some people wear their logo without even knowing it’s the MISFITS.

Why not create your own music that is similar in style to Misfits?
We’ve taken a stab at it (pun intended), but we did it with the intent to just to step away from having an originals band (no fighting, no constant rehearsing, no pressure… all fun). We make it a point not to embellish either. We play as close to the recordings as we can, because honestly no one is here for you, they are here for MISFITS. And that’s what we give’em; warts and all.

Do you have a problem with some of the lyrics by the band, especially those that refer to rape/misogyny?
For a long time I didn’t. It’s a horror punk band, so the lyrics reflect that which produces fear and fearful situations. “Killing babies”, “raping your mother”, and “hacking the heads off little girls” comes with that territory. I must admit as of late, I’m becoming more conscious of the energy one puts out in the universe, the spoken word/mantras… it’s all very powerful stuff. I don’t know how long it will continue to be something I participate in. 10 years thus far, though.

Are you part of Chicago’s punk movement? If yes, how is it, if no, why not?
Punk movement? Movement is a strong word. Didn’t know there was one anymore. I was born in the mid 70’s, so I wasn’t conscious enough of it when a “punk movement” was actually happening. When Punk was the middle finger to society it was born to be. Now… it’s like that joke. “How many punks does it take to change a light bulb? None. Punks don’t change anything.” If there is a movement, more power to them, as for us we play for everyone out there that has ever heard of or would like to hear MISFITS music. There’s no politics, no movement, no injustices overcome… just horror punk and good times.

That question is like splittin’ hairs. Much like question 2. We do what we do… because we do it. We don’t pretend to represent anything. We don’t owe anyone an explanation either. If you dig it, show up. If you don’t… then don’t. But if you do, we will pummel you with a barrage of horror punk enough to melt your flesh off.

You’ve played all sorts of venues – what are some of your favorites?
The Portage Theater and the Congress Theater were some of the biggest stages we’ve played on. Fizz was great. Subterranean is always fun. But, the most memorable was a lot in Indiana for Hardcore Halloween in ’06. It was a small place, but people went ape sh*t.

There is nothing like looking out and seeing complete strangers mouthing every single word to every single song that you have rehearsed and love to perform. Because after everything wraps up, people of all ages, backgrounds and walks of life have had a fun time hearing these songs that either took them back in time or are beginning their journey. This is horror punk. This is the legacy of… MISFITS.

Do yourself a favor, fiends, go check out The Devilocks, along with Kelroy, Doves or Mercury and The Handsome Devilz, this Saturday night, October 29 at The Wire. 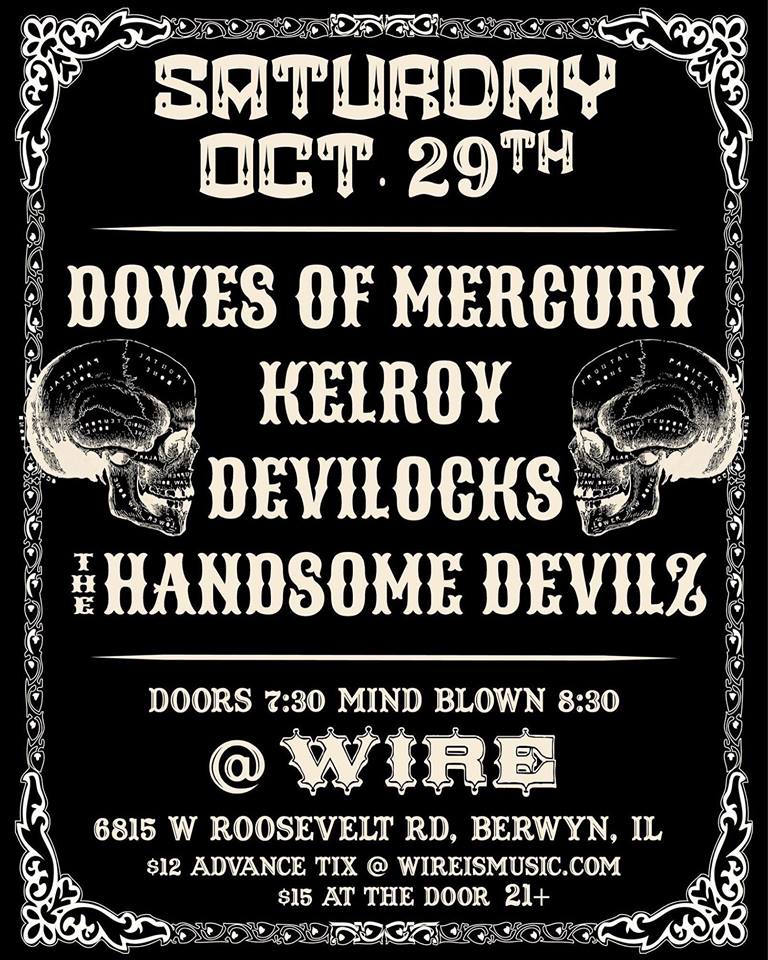