This past Saturday, my cousins and uncles got together to play cards and eat following a tradition we’ve kept since we were young – creating safe spaces to gather, enjoy each other, and be ourselves.

After a couple of hours, my cousins Luis and Tomas huddled in the corner of the garage to talk about rap and hip hop when suddenly Tomas says, “Forget it, let’s do it right now,” and before our eyes they suddenly transcended space and time with their lyrical and poetic verse. A cappella and with accompanying beats, Luis and Tomas permeated that cold Saturday night with their musical deftness for over 15 minutes, reaching a climax that had us dancing and moving in harmony with them. We erupted in laughter and stood together in awe, witnesses to connections and currents that run deeper than we often know or can see.

Music and poetry have a special ability, it seems, to help us tune into those currents and truths, and marinate in them, dance in them, celebrate them.

On Tuesday, I had the privilege of witnessing this again at the Lit & Luz Festival of Language, Literature, and Art. The festival opened with “Señal Night,” a special reading at the Poetry Foundation by four authors from Latin America: Pablo Katchadjian (Argentina), Florencia Castellano (Argentina), Luis Felipe Fabre (Mexico), and Gabriela Jauregui (Mexico).

Castellano’s beautiful verses on war, cowboys, and cicadas reminded me of the different friends I’ve had from Argentina… and of Mercedes Sosa.

Fabre’s poetic creativity took us on several trips to revisit Sor Juana and with his rhythmic reading style I was taken back to the early days of “Louder than a Bomb” here in Chicago.

Jaregui’s wordplay was magnetic, and many of us were touched deeply by the images and connections to the student massacre in Mexico City (Tlatelolco, 1968) and the forced disappearance of 43 students from Iguala (Guerrero, 2014).

And, finally, Katchadjian’s mannerisms and philosophical musings had us laughing while connecting words and contexts in unique ways.

I was especially impressed by the relationships the translators formed with each other, and with the authors. Fabre and John Pluecker made a special note of such, and Victoria Cóccaro along with Rebekah Smith both spoke of their endearing friendship that began while working on Katchadjian’s works.

After the readings, we all gathered in the lobby to share with each other, to make connections, and to marinate in them. I look forward to more times tomorrow, Saturday, at the closing event of the Lit & Luz Festival – “(Anti-)Static: A Live Magazine Extravaganza” – which will be held at Co-Prosperity Sphere at 8pm. There will definitely be more readings, music, and mezcal to help us tune in and celebrate! 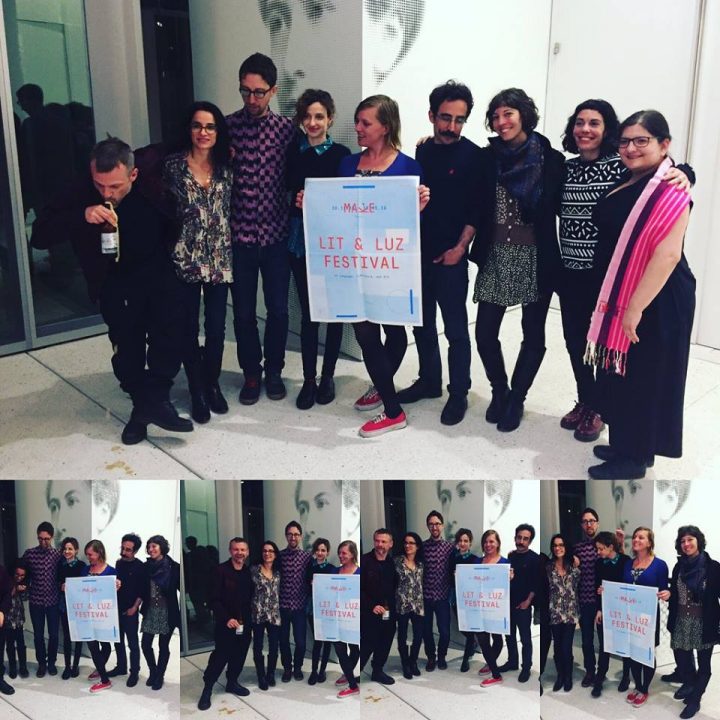